Mike Hammer returns to the ring for a ‘little’ tour

Manitoba-based indy wrestler Mike Hammer is not the biggest name on the circuit, though that is perhaps because he has been out of circulation for the last five years. But he’s back in the ring for a series of shows across the province, a part of the Little People, Big World Tour.

And the little / big name for the Canadian Wrestling’s Elite tour is appropriate, given that Hammer, at 5-foot, 121 pounds is caught between working with little people and with wrestlers who might tower over him. 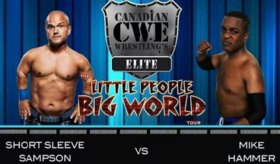 “I would wrestle bigger guys and smaller guys. If I’m working a midget, I’m only going to do certain spots, which wouldn’t cross over with a bigger guy, because it just wouldn’t make sense,” Hammer told SLAM! Wrestling. “Maybe one day, midgets will be as well-known as the big guys. I don’t honestly consider myself a midget so-to-speak. The biggest change I’ve seen is that they’re (little people) more acceptable now. If you watch some of these cards, the midgets are what they (the fans) want to see.”

Also on the tour is former TNA, WWE and movie star Short Sleeve Sampson, who is really looking forward to when he and Hammer cross paths.

“I am meeting and working with Mike for the first time on this tour. Hopefully he is a good sport at getting beat,” Sampson said with a laugh.

And Hammer is of course, equally looking forward to hooking it up with Sampson.

Hammer had his reasons for staying out of the ring. “I’ve been out of the business for about four or five years now, but I still watch it (wrestling) and I still like it; I just didn’t wrestle,” Hammer said. “My body just needed repairing and I just needed a back-up plan.”

Hammer’s day job as an IT technician has certainly kept him busy during his hiatus.

“Not many people can say, ‘I’m a professional wrestler,'” the 31-year-old Hammer said. “I just always loved the sport and I always wanted to be a part of it.”

Hammer, whose real name is Mike Reid, first broke into the business as a teenager, and it really almost happened by accident. But once he took his first step into the ring, he knew there was no turning back.

“I never really thought about getting into wrestling, until I got out of high school in 2000. I went to a local show, because I wanted to see what it would be like,” Hammer said. “My first event was actually supposed to be something just for giggles, for fun. And then I ended up joining in the next week for practices, and I started training two weeks later. I started doing tours and local shows, which was pretty cool. And then I actually ended up dropping out of college, to pursue wrestling.”

Hammer was initially trained by “The Zombie Hunter” Mentallo. “Mike started off training with me, but not really to be a wrestler, but to be more of a manager or corner man who could do some things if necessary. Kind of like Kemonito from CMLL or the midget Dragon Gate used for a while,” said Mentallo. “He never really finished any formal training with me.”

The next step in Hammer’s evolution was with the CWF, run by Ernie Todd, which ran many northern Manitoba tours on First Nations reserves.

To Hammer, his glass was always half full; he can work in the ring as underdog, wrestling a man three times his size just as well as someone smaller.

None of Hammer’s bridges have ever been burned, because most people will agree that he’s just an all-around fun guy. He really seems to get along with everybody, whether it’s other wrestlers, fans or even promoters.

“I’ve known Mike for about 10 years now. He’s a lot of fun. He’s full of excitement, and it’s contagious,” said CWE promoter Danny Duggan. “It was an interesting relationship between him and Ernie Todd at the time. They were like a married couple on the road. They had been traveling for many years that Mike would often be in the front seat and Ernie in the driver’s seat, like man and wife, for hours and hours, down the highway road.”

The CWE Manitoba tour is underway now, and runs until Sunday, July 27, with the shows focusing on the battle of the little people. There is a show Tuesday evening at the Royal Canadian Legion in Virden, Manitoba, with a bell time of 7 p.m. Tickets are $15 in advance, or $18 at the door. Another fun one happens on Wednesday, July 23rd in Souris, where “Mr. Beefy Goodness” Vance Nevada comes out of retirement, teaming with Sampson against CKLQ radio DJ R.J. Lilley and Mike Hammer.

In the future, Hammer would definitely like to see bigger things for these little people.

“I’d like to see them (midgets) go on to bigger things like WWE, TNA or even ROH,” he said. “Midgets have always been known for the comedy kind of thing. I would like to see more guys being signed by the WWE.”