LONDON, Ont. — WWE brought its SummerSlam Heatwave Tour to London’s Budweiser Gardens for a show on Saturday night, and the crowd definitely offered proof that Roman Reigns may indeed be the next chosen one, both for his in-ring action and for the way that the fans reacted to him.

Here are the results from the show:

1) Goldust and Stardust beat Rybaxel in a pretty good tag team match. Stardust got the pin over Curtis Axel. 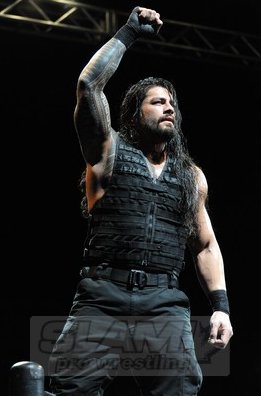 Roman Reigns at the conclusion of the WWE house show in London, Ontario, Saturday night. Photo by Mike Mastrandrea

2) Paige vs Natalya started off with mutual respect between the two crowd favourites, but Paige got increasingly aggressive as the match went on. Paige disrespectful tried for a Sharpshooter, but Natalya escaped it and put on one of her own to get the submission win.

3) The Miz came out and said that because he was a big movie star, his opponent wasn’t allowed to hit him in the face. Then he offered his opponent the chance to back out of the match. But Dolph Ziggler’s music hit and it was clear he wasn’t going to agree to either request. Miz was in control for much of the match, but in the end, Ziggler hit him in the face repeatedly and put him down with a Superkick for the pin.

4) R-Truth vs Rusev w/ Lana. Lana said that Canada was like the US only weaker, and would fall under the power of Russia. This was more competitive than a Rusev TV match. But ultimately what’s up is that R-Truth submitted and lost. Lana, for those that are interested, wore her hair down and looked hotter than ever.

5) A Bray Wyatt video aired to hype the main event between him and Roman Reigns in either a No Holds Barred Match or a London Street Fight.

9) Cesaro beat Kofi Kingston with the Neutralizer. This was a showcase for Cesaro’s power, as he manhandled Kingston, dead-Iifting him several times and hitting many power moves. Kofi’s injured ribs slowed him down a lot, and in the end they caught up to him.

10) Roman Reigns vs Bray Wyatt w/ Rowan and Harper. The audience voted by applause for a London Street Fight. The crowd was crazy hot for Reigns, though Wyatt did get his fair share of chants as well. The street fight was pretty much contained to the ring and ringside area. On the outside, Wyatt got an advantage by whipping Reigns into the steel steps. A Singapore Cane helped him press the advantage for a while. But before he could finish off Reigns, the big man rebounded. They fought their way down the entrance way up to the stage where Reigns slammed Wyatt. Reigns then tried to Spear Wyatt into the steps that had been propped up in the entrance way, but Wyatt moved and Reigns hit the steps hard. Back in the ring, Wyatt grabbed the mic and serenaded the crows with “He’s Got the Whole World in His Hands” but Reigns got a hold of the mic and cracked him with it. As Reigns was setting up a table, Wyatt spider-walked to the corner to grab the cane. Reigns took a few hits before muscling it away, and turned the tables. He set up an actual table, but Wyatt low-blowed him and put Reigns through it for a two-count. Wyatt set up another table in the corner and was going to put Reigns through it with Sister Abagail but Reigns powered out. Reigns was ready to end things when Rowan and Harper ran in to attack. The Usos made the save and ran off the big men with stereo flying dives. Wyatt tried again, but Reigns blocked the move. He hit a Superman punch, then Speared Wyatt through the table to get the win. Very good match.