Mat Matters: A last goodbye and thanks to Shuhei Aoki

The deaths that you less expect are usually the ones that will shock you the most. That is certainly the case when I learned about the passing of a super fan, Shuhei Aoki.

Shuhei wasn’t your normal hardcore fan. He wasn’t living in a big wrestling town like Philly or New York. He didn’t have to drive only a few hours to get to a wrestling show or a convention. Heck, he wasn’t even living on this continent.

Shuhei was from Japan. And several times a year, he would fly to North America with only one purpose: to meet with oldtimers and wrestling personalities.

That’s not a hardcore fan; that’s a super fan! 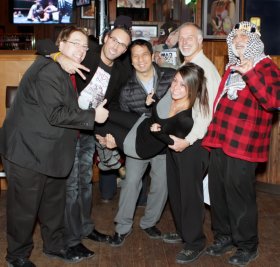 I was first introduced to Shuhei by Greg Oliver many years ago at one of Greg’s Titans in Toronto reunions. Since then, I don’t know how many times I have seen him, sometimes not even expecting him to be there. Off the top of my head, there was Las Vegas for the Cauliflower Alley Club reunion, Toronto for WrestleReunion, Amsterdam, NY, for the Pro Wrestling Hall of Fame, Boston for the New England Hall of Fame, Charlotte for the Mid-Atlantic Reunion, Waterloo, Iowa, for the National Wrestling Hall of Fame; simply said, he was everywhere.

But he really surprised me when he told me he wanted to come to our book launch in February of 2013 … here in Montreal! This wasn’t a big convention like he often went to, but since Bertrand Hebert and myself were having quite a few oldtimers from Montreal who don’t usually go to those wrestling conventions, he wanted to be here and meet with them.

He asked me if there was any hotel nearby. So I recommended the one just in front of where our launch was being held. Upon arriving, he sent me an email to thank me for “the great recommendation” and that he was going to see me later that night.

To this day, my dad is still amazed that someone actually flew from Japan to come to the launch of Mad Dogs, Midgets and Screw Jobs: The Untold Story of how Montreal Shaped the World of Wrestling. When we saw each other a couple of months later, he made sure to give me a copy of all the pictures he took at the launch. That’s the kind of person he was.

He always had something to give me, usually pictures he had taken from one of our last meetings. Once, he brought me some Japanese homemade trinkets that you can only find there. Just like that. Without asking anything in return and with no particular reason. That’s the kind of man he was.

It comes to a shock to me because I saw him a month ago in Las Vegas for the Cauliflower Alley Club reunion. I was really happy to see him, legit. Sometimes, fans can be hard to deal with, but not Shuhei. It was always a pleasure.

Last month, he was flipping through my binder of old school pictures from the Montreal territory and a picture of Yagi, a Japanese wrestler who worked for Grand Prix wrestling in the early ’70s, caught his attention. So I decided to give it to him. You should have seen his reaction. It was like if I had just gave him $100!

On the Wednesday night, after the banquet, we talked about seeing each other in Toronto for this year’s Titans in Toronto dinner (on September 27th). We then said goodbye to each other. Little did I know it would be our last goodbye.

As I’m writing this, I feel sad. I’m sad because of Shuhei’s dedication to wrestling, the respect he always showed to everyone, from the big superstar to this simple writer, because of the likable character that he was. I consider myself a huge wrestling fan and I’m not even in Shuhei’s league. I’m sad because he was probably one of the nicest people I have ever met in this business, someone who seemed just pure, with no personal agenda on his mind.

The wrestling community lost a fan. A super fan.

Mat Matters: Shuhei Aoki was a super fan — and a super friend