Mat Matters: Shuhei Aoki was a super fan — and a super friend

Shuhei Aoki is not a name everyone is going to know, but I’d hazard a guess that if you have been to a fan fest or convention in the last 10 years, you’ve seen or met him.

The news struck me out of the blue, a post on Facebook announcing that he had died at age 39, of a heart attack, on June 23rd. 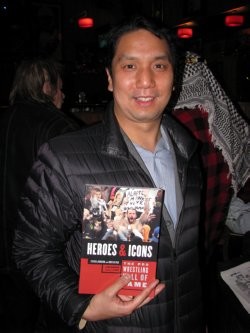 This is a personal one.

From where I write this, there’s a photo of Shuhei on the wall, battling my son in a foam sword fight, while Quinn is dressed in a adorable blue kimono that Shuhei had given him. That was from our road trip together, our adventure, where he had made arrangements to go meet Phil Watson, the son of the legendary Canadian wrestler Whipper Billy Watson, in an out-of-the-way town, Picton, Ontario. Shuhei had planned to take a bus to Kingston, from my hometown of Toronto, and then take a cab to Picton. Sheesh.

But it is a good example of the efforts he would go through to go meet a wrestler that he had never met.

I committed myself and my son to the adventure, driving Shuhei instead. Along the way, we called an audible and went into Cobourg, Ontario, hunting the elusive Goldie Rogers. That was fun — we asked around town and eventually someone knew where to find him. We had a great visit with Goldie in a Tim Horton’s restaurant in town, got to see his place, and a little of his memorabilia. 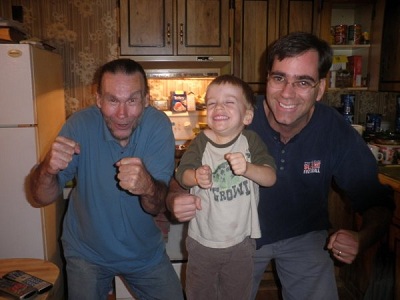 Shuhei being Shuhei, he gifted me a great photo montage from that trip.

As yes, the photos and the gifts.

If you became a friend of Shuhei, he always — and I mean always — brought you something as a gift. It is more than a Japanese custom, it’s just part of who he was.

In February of last year, he traveled into Montreal from Tokyo for the book launch for Mad Dogs, Midgets and Screw Jobs, a book about the history of wrestling in Quebec. I can still remember hunting around for the right gift to give him; my wife, son and I picked out a great Montreal Canadiens toque and gloves to keep warm in Montreal in February.

There’s a history there too.

During one of his trips to Toronto, he and his friend Kohei Ichiki came by our home, before we headed out to meet with Sweet Daddy Siki at one of his karaokeing gigs. Shuhei in particular was ill-prepared for the cold weather, and we ended up giving him a winter jacket.

We saw each other at fan fests and especially the Cauliflower Alley Club reunions in Las Vegas, where the Japanese fans / photographers / writers often seem to walk around in a fog of sorts, with the jet lag and the lack of sleep in the bright lights of Vegas.

At one of those Cauliflower Alley Club reunions, Shuhei was chosen to receive the Red Bastien Friendship Award for, well, being a friend.

Just about every wrestler knew him. He had a way about him, an ability to talk himself into situations.

Geez, he managed to find Cowboy Frankie Lane in a nursing home in a tiny town near London, Ontario, and had been to visit the reclusive Blackjack Mulligan in his Florida home.

But my favourite story is the one that I told on the podium in Vegas when I introduced him to the audience when he got his Red Bastien Friendship Award in April 2009.

He and Kohei decided that they wanted to meet Hans Schmidt, so they set out from Montreal in a cab to Entrelac, about a two-hour ride.

WITHOUT contacting Hans Schmidt ahead of time.

When they got to the small community, they asked around and another cab dropped them off at Hans’ door.

What could the Teuton Terror do but invite them in for a short visit? His photos of Schmidt near the end of his life really helped both in my book, The Pro Wrestling Hall of Fame: The Heels, but also in the obituary and photo gallery on this site. (Not long ago, he decided to use the name “Retroschmit” for his photos; never asked him where the name came from, but he did express the desire to distance his real life from his wrestling life.) 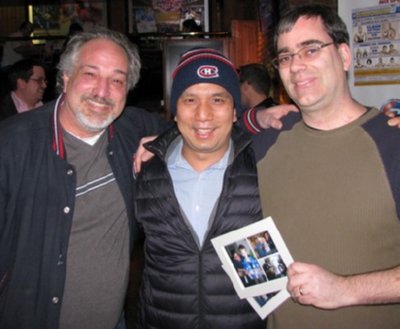 Having studied for a while in Los Angeles, Shuhei was pretty good with his English, and if anything, he was shy about it, never totally confident that he was saying the right thing. Over the years, I tried to learn what I could about him, his life in Tokyo, which included his mother and father, who ran a nursing home of sorts where Shuhei worked in an administrative capacity.

Now, as I page through the notes from other common friends on Facebook, I am faced with a real regret that I did not get out to the Cauliflower Alley Club reunion this past June, to see my friend Shuhei Aoki one last time.

Domo arigato for the memories.

Mat Matters: A last goodbye and thanks to Shuhei Aoki