Hannibal vs Prophet a match over respect, loyalty

On May 10th, Devon “Hannibal” Nicholson makes his return to the ring after three years on the shelf battling Hepatitis C. For the bout in Smith Falls, Ontario, he chose to face established veteran Jeremy Prophet. It’s pretty evident that both have a lot of respect for each other.

They each talked about the other, both in storyline mode and in reality. 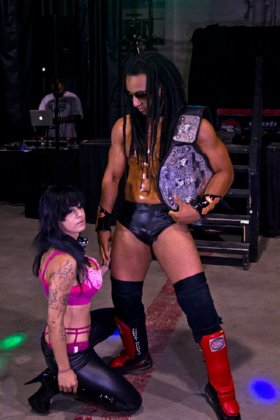 “It’s going to be an epic encounter. It may be the last time that we ever wrestle” said Prophet. “I know that he’s itching to defeat me in his big comeback match, and he’s gone through a lot of adversity. But there’s not going to be any sympathy on my end for him. I respect what he’s gone through, and it’s amazing that he has, but it’s not going to change the fact that I’m bringing 100% of what I bring to the table, and there’s going to be no sympathy or mercy from me when he’s standing in the ring across from me in Smith Falls.”

Nicholson has been training regularly at Tristar MMA in Montreal and is in top shape, and working off his ring rust with Jacques Rougeau Jr. — the wrestling star who trained both Nicholson and Prophet initially.

“People can expect to see a very physical, hard-hitting match that will most likely involve technical wrestling, brawling and high flying maneuvers,” predicted Nicholson. “I don’t expect this to be an easy match as Jeremy has scored some victories over me in the past and has also caused me some serious physical damage including almost breaking my neck the last time we faced off. It’s going to be a fight.”

What’s interesting is that both Nicholson and Prophet have their detractors, people that have been turned off by their attitudes or their promoting styles. Of course, it’s hardly a unique experience in wrestling — or in real life, for that matter.

But what they have is a loyalty to each other. They met at Rougeau’s school back around 2002, but it wasn’t until 2008 that Prophet started working on Nicholson’s shows.

Prophet offered to do a tryout for Nicholson at a show in Kingston. “He has wrestled on every one of my shows since then and has always strived to put out the best effort possible both in the ring and helping out behind the scenes,” said Nicholson, continuing. “Despite our differences in personalities I believe that Jeremy is a phenomenal wrestler. He’s legitimately tough, is always in tremendous shape, can make any opponent look good and he has the ability wrestle any style. The legends he has faced on my events always speak highly of him after their matches. I think he has a bright future in the wrestling business.”

Loyalty is important to Prophet. 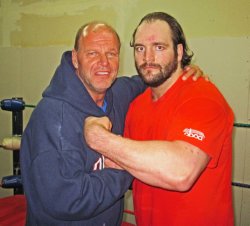 Devon Nicholson, right, has been working out with Jacques Rougeau Jr. in preparation for his return to the ring.

“I think that loyalty and reliability is something that goes a long way in professional wrestling, and is something of a lost art,” said Prophet. “With Devon, here’s someone in the ring who’s given me by far the toughest fight of any opponent that I’ve ever faced. He’ll go and say the same thing about me.”

He spoke a little to what some people find difficult about the ultra-intense Nicholson, who has a legitimate wrestling and mixed martial arts background.

“There are a lot of people that are scared to step into the ring with Devon. That’s how we first faced each other,” said Prophet. “I stepped up to the plate because I wrestle without fear, I fear no one in there. I can handle myself and I wasn’t worried, so I think we gained a mutual respect for one another based on the matches that we had, based on the punishment that we dished out to each other, and still, after they were over, to look each other in the eyes, shake hands, and stand there as two battle-tested warriors.”

The 28-year-old Prophet has heard some of the shots against him — arrogant, unproven, too small.

“I don’t really waste time thinking about why. I’ve always just chalked it up to the match that I carry myself with a great deal of confidence. I don’t let anybody ruin my day. I don’t let anybody take the smile off of my face. So I carry myself with confidence in everything that I do,” said Prophet. “I know my own value in general, so I’m not going to let anyone discredit that. I take wrestling very seriously. A lot people don’t. A lot treat this like a social event, or like something that they do to elevate their own social status.” 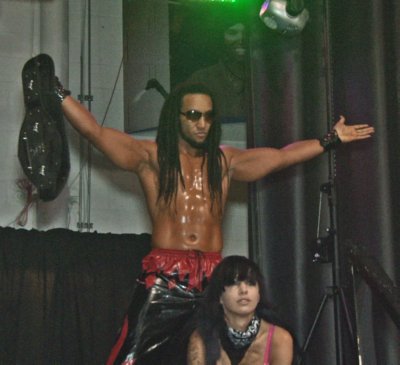 Jeremy Prophet and his second, Mileena.

Always in great shape, with his long dark hair, Prophet does cut an impressive figure, if not an overtowering one. “I’ve always referred to myself as being very medium-sized, meaning that I’m neither tall nor short, I’m neither big nor small. By wrestling standards or real world standards,” the 5-foot-8 Prophet said.

There’s no question that Prophet (real name Jeremy Baranoff) takes the wrestling business seriously. He is extremely well-spoken, polite, and passionate during conversation.

It’s the same in his day job, as a broker for the credit card processing industry, which results in a lot of travel to the United States. “Sometimes I find myself talking like an American,” he joked.

As Jeremy Baranoff, he debated letting his co-workers into his other life as Jeremy Prophet.

“It’s one of the worst-kept secrets. Yeah, I’m kind of like the office celebrity, I guess,” he said. Maybe it’ll pay off in the long run when they come to support me at shows. There’s already a few that are starting. It’s a fun feeling that I didn’t embrace at first, but now I don’t mind it. It’s part of my identity, it’s part of who I am. Jeremy Prophet, the character, is very close to Jeremy Baranoff the person. I don’t mind that people know my secret identity.”

Prophet makes no secret of his Montreal roots, and plays them up when he wrestles across the border in the New England states.

“It’s really awesome to be able to represent Canada and to represent Quebec, because there’s not a lot of guys down there doing that,” he said. “It’s been a couple of years now that I’ve been mostly concentrating on expanding my career, going as far as possible. It’s always a thrill to me to get booked and perform in another market. I find a lot of guys, they’re just content on being local legends … they just want to perform at the local level in front of people they know, and face guys they know. Whereas for me, I always look for the new challenge.”

Like many on the independent wrestling scene, Prophet dreams of making a living at pro wrestling. He did an enhancement match once on WWE Smackdown and was featured in the TNA Gut Check a couple of years back, but that didn’t pan out. There is a small promotion in Victoriaville, Quebec, that he books for as well.

But is 28 years of age too late to get that big break and crack the big-time?

“I think it’s never too late. Some people will say that 30 is the cut-off age for WWE, but as of right now, they seem to be shifting towards wanting to hire experienced talent. I think the advantage of hiring experienced talent is that you have guys that are ready to go, they are not ones that you have to train and build from scratch,” he explained. “Signing someone my age might be a better idea than signing someone younger who doesn’t have that level of experience, who maybe was a failure at something else and decided to turn to wrestling as an alternative, rather than someone who, like in my case, their entire life, since they were five years old, they were wanting to be a professional wrestler.”

Still, having that day job is a good feeling.

“Really, in this day and age, no one’s going to get rich off independent wrestling. There are a few guys that they are lucky enough that they are able to do that, whether it’s a combination of talent, exposure, something along those lines. My ideal would be to live off professional wrestling.”