For someone who’s ostensibly retired, Jim Ross sure is a busy guy.

His barbecue products are still going strong. He’s a tireless blogger, offering up his thoughts on wrestling, MMA and all kinds of topics. J.R.’s podcast, born after some prodding by Stone Cold Steve Austin, attracts big names on a regular basis. 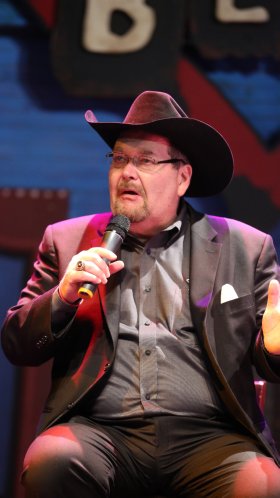 Jim Ross at the House of Blues performance in New Orleans on WrestleMania in April. Photo courtesy Jim Ross

And he’s still staying connected to wrestling fans, but in a more direct and personal way than ever thanks to his series of one-man shows called Ringside: An Evening with Jim Ross. His next stop brings him to the Danforth Music Hall in Toronto on May 9th, which is fitting since it was an iconic Canadian grappler who got him started down this particular road.

“Last summer, I think I got an email or text from Bret Hart wanting to know if he could give my contact info to a promoter by the name of Paul Inwood who lives near London, England,” Ross told SLAM! Wrestling. “Bret had just come back, I think he had done a couple of dates, and Paul was interested in me coming over to do these, as they call them, spoken word performances. So I said sure, I’ll entertain that idea. Hadn’t thought about it, really.”

Though Ross had some initial doubts about whether he’d enjoy the format or the fans would appreciate him as a solo act, he didn’t have much time to dwell on them during a whirlwind first tour. Still working in WWE at the time, he flew from Orlando to London, did his first show in Cardiff, Wales, and crashed for a few hours before heading back to London. After a show there the next morning, he was off to Manchester (the same night as a Manchester United-Chelsea match) and Glasgow before flying back to Orlando for talent tryouts.

Despite the kind of hectic itinerary he’s now happy to have left behind, Ross found that he liked having a chance to show off a looser persona after spending most of his broadcasting career as the straight man putting his partners and the talent over. He also quickly realized that he wasn’t going to be up on stage talking to the fans when he’d rather be having a back-and-forth exchange with them.

“Me going and doing a 90-minute speech ain’t happening, and I tell the audience that from the get-go,” Ross said. “I tell them, ‘Tonight’s show is about us. Tonight’s show is about our interaction. In a matter of moments, we are going to embark on a no-holds barred Q&A that I hope is going to be memorable for everybody. And we’re going to have fun, but first I want to take you on a little journey.'”

That trip down memory lane covers the entire span of his unique career in the wrestling business, where the man known for his black cowboy hat wore many others since getting his start in 1974. All of them get explored during the opening segment, though the delivery may change depending on whether a particular show is age-restricted (like the ones in New Orleans over WrestleMania weekend, which were 18 and over) or open to everyone like the upcoming Toronto date.

Ross has no plans to put parents in uncomfortable situations if they bring children, and he also has “an unlimited amount of stories” that he can relate in more than one way.

“I have plenty of material, so I don’t need to say, ‘Well, I didn’t have a real good show because there were too many kids there and I couldn’t use my “A” material.'” he said. “I can tell almost all of my stories with a PG rating if need be.”

There’s also an inspirational aspect to the shows that people might not immediately expect. In his trademark semi-deprecating style, Ross points out that a chubby guy with a Southern drawl and Bell’s palsy shouldn’t have a successful career as a broadcaster, not to mention all of the other positions he’s held in various promotions.

“Hopefully it’ll give somebody the encouragement that no matter what they’re going to do, you can be successful if you just refuse to fail,” Ross said. “I didn’t quit, and I didn’t let my illness or my condition define me. People can learn from that, I think. I don’t care what you do for a living. Don’t let somebody else put restrictions on you. Don’t accept somebody else’s description of what you can be. You determine what you can be.”

He hasn’t forgotten that he started out as a wrestling fan before his first steps into the industry, which is why he enjoys the interaction during the Q&A segments the most. John Pollock, who served as MC for the New Orleans performances, will also help bring order to the fan queries in Toronto.

J.R. calls the co-host and producer of The LAW a “really positive presence” with great product knowledge, and the admiration is definitely mutual.

“The guy’s a workhorse,” Pollock said. “Seeing him down in New Orleans, from all the media he did, the two shows in one night — it’s just incredible the amount of work in this guy just in one day that I got to experience.”

Once the questions start flying, no topic is off-limits. Every audience brings a little different flavour to each tour stop, though almost all of them venture into some of the more controversial or tragic wrestling events of the last few decades.

Sadly, more than one of these subjects has a Canadian connection, things like the Montreal Screw Job, Owen Hart’s death during a pay-per-view, or the grisly Chris Benoit saga. Ross won’t shy away from any of those areas if people want to go there.

“You’re going to get questions regarding topics that you might not have at the top of your list that you want to address, but they’re what the fans want to address,” he said. “They’re what the fans have on their minds, and I’m a big believer in customer service. The fans come first, so if that’s a question you want to ask, then have at it. I’ll try to give you the best answer that I can.”

Previous audiences have focused much of their attention on the time before wrestling became a big deal on TV, which Ross attributes to so much of the modern era being archived online. Anything dealing with the pre-Internet territory days is new info to younger fans, many of whom appreciate the chance to find out more about the people who built the foundation upon which today’s business stands.

In a market as rich in wrestling tradition as Toronto, that tendency should be even more pronounced.

“I’m very, very excited about coming to Toronto,” Ross said. “Canada in general probably deserves more respect than it’s been given for its contributions to the business over the decades. The respect, dedication and knowledge of the business of Canada’s fanbase isn’t exceeded anywhere in the world.”

Some of that fanbase will be in Toronto for the Ring of Honor and New Japan Pro Wrestling “Global Wars” event at the Ted Reeve Arena on May 10th. Just like the one-man show dates in New Orleans made sense when the city turned into the center of the wrestling world during WrestleMania, the hope is that people want to make a weekend out of it and attend both productions. And Ross is committed to going to the ROH show.

Ross’ representatives are eyeing similar synergy in Los Angeles this August during SummerSlam, as well as in Las Vegas during the UFC’s International Fight week over the July 4th holiday. Standalone shows haven’t been ruled out either, so it’s possible the tour could make its way to other cities in the future.

The Danforth Music Hall is probably the largest venue Ross has played so far, and he fully expects some tickets to be available at the door on the night of the 9th. His barbecue products will be on sale there too, free of the shipping and handling fees that accompany them when ordered online.

It’s all evidence that while he’s no longer the voice of the world’s biggest wrestling promotion and he might be more selective about how often he travels and what projects he chooses, J.R. is far from hanging up his hat. Regardless of whether the interaction, entertainment or education aspects of his Toronto show prove most memorable, there’s one theme that should shine through.

“My retirement was a nice way of putting me leaving WWE,” Ross said. “It didn’t mean that my life had ended, or my professional career had ended, or that I didn’t have any motivation to stay engaged with a fanbase that I had this love affair with for 40 years.”