BUFFALO, NY – Friday Night SmackDown (and also Main Event) performed for its Tuesday night crowd this week in Buffalo, NY, delivering a show that pushed all the familiar buttons for a crowd that was happy to respond enthusiastically.

In fact, with the long winter finally over, it felt like the First Niagara Center was full of people bursting out of their hibernation with raucous delight. It was a good-sized crowd (larger than what has been in attendance even for past PPV shows) and, besides Batista, there really wasn’t anyone resoundingly booed. Everyone got some love from the people as if to say it didn’t matter who you are, just thank you for putting on the show for us. 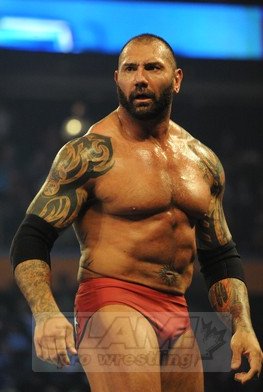 Alas, though, poor Batista; he can’t buy a fan club right now. Except, of course, the ironic cheering of some older males who seem to be gravitating to him in a counter-culture manner; so now that he’s generally unpopular, it might be cool to cheer for him, which may eventually end up bringing him the response he and the WWE expected upon his return.

John Cena, on the other hand, always has the majority of fans on his side in Buffalo. From a speech he made during the Main Event taping, to his ludicrously over-the-top pantomiming made during his match later on SmackDown, Buffalo respects John Cena. He repaid them after the taping was over by issuing a nonsensical challenge to Bray Wyatt (I can’t give you all of the inane details without spoiling the Friday night show); Wyatt accepted, and the bad guys were run out of town to send everybody home happy.

Points to the young kid in front of me who spotted the Buffalo Bills in attendance a long time before they were shown on screen (and talk about a pop from the crowd: the Bills can do no wrong … in the off-season). Points also for little kids calling out Goldust’s name throughout his match against Curtis Axel. The Bizarre One has seemingly transformed into the Ageless One, and he was in fine form tonight.

Being deprived of commentary is perhaps the lone drawback to attending a show live, so it was nice to be entertained after the taping by a father’s explanation to his son about how a beard automatically makes someone a villain.

Here it is: beards make you look creepy and evil, and everyone hates beards — especially women and children. But Daniel Bryan has a beard! Yes, but his beard is so big that people like it. The whole time he was growing his beard, he was a bad guy, and then it grew big enough to make him a good guy.

It was a nice treatise on facial hair, even if the son gave up too soon before asking why the Wyatt Family’s big beards don’t make them good guys.

Main Event matches:
Dolph Ziggler vs. Jack Swagger
Cameron, Naomi, & Natalya vs. Alicia Fox, Aksana, & Tamina
Goldust vs. Curtis Axel
Alberto Del Rio vs. R-Truth (who, amazingly, had the crowd in the palm of his hand)

Smackdown matches:
Sheamus vs. Dean Ambrose for the United States Championship
RVD & Big E vs. Antonio Cesaro & Bad News Barrett (the crowd likes doing the RVD thing, but Cesaro and Barrett were the clear favourites)
Kofi Kingston vs. Rusev (boy, that old acrimony for Russia sits very close to the surface here in the U.S.; it felt like Rocky IV all over again)
Roman Reigns vs. Mark Henry
3MB vs. Los Matadores
Batista vs. Seth Rollins
John Cena & The Usos vs. The Wyatt Family