Adam Cole has the ROH World in his hands

It’s a fun time to be in Ring of Honor. The company is returning to iPPV with Ustream, and debuts on traditional live PPV in June. During the course of the next two weekends, ROH is teaming with New Japan Pro Wrestling for stacked cards in Toronto and New York City. And who better to discuss these topics and more than ROH World champion, Adam Cole? 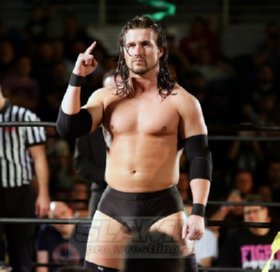 Ring of Honor has always had a good relationship with Japanese wrestling going back to its very beginnings, when grapplers like Dick Togo and Masato Tanaka wrestled on the first shows the company ever produced. Then in the mid-2000s the company’s relationship with Pro Wrestling NOAH, the hottest Japanese wrestling company at the time, brought in North America the now famous Samoa Joe versus Kenta Kobashi match. On top of it, ROH also used incredible workers like KENTA, Naomichi Marufuji, Takeshi Morishima and Go Shiozaki. Another legend, the late Mitsuharu Misawa, wrestled for ROH in a rare North American appearance. Let’s not forget about the Dragon Gate guys who gave fans several match-of-the-year-candidates before establishing its own presence on North American shores. At the peak of all this, in 2007, ROH even produced two shows in Japan.

When Sinclair Broadcast Group bought the company and put new management in place, Puroresu was put on the shelf so the company could concentrate its energies on this continent.

But with New Japan Pro Wrestling’s rejuvenation the past few years, it was only a question of time before the bond with Japanese Puroresu was going to renew itself.

New Japan talents like Hiroshi Tanahashi, Kazuchika Okada and Shinsuke Nakamura are considered among the best wrestlers on the planet right now. ROH’s A.J. Styles has just won the IWGP title, which is the biggest title in New Japan.

This coming Saturday in Toronto, fans will mostly see New Japan wrestlers working each other and the fans in New York City will see them tangled with ROH talent.

In Toronto, he will defend his championship against former ROH World champion “Mr. Wrestling” Kevin Steen, who won his title in the same venue — the Ted Reeve Arena in the city’s east end — amongst adoring fans. If he wins this fight (and the word fight is appropriate here), Cole will defend the belt in New York City the week after against Jushin “Thunder” Liger.

“If it was up to me, I would have loved to face either Tanahashi or Liger, the two are about the same. But I’ve been a fan of Liger since I’ve been wrestling,” Cole told SLAM! Wrestling.

Like many of his peers, Cole, 24, was a Japanese wrestling fan growing up and if the opportunity comes, he wouldn’t say no to New Japan, the company that Antonio Inoki created more than 40 years ago.

“Of course, if I have the chance one day, I’d love to work for New Japan. But I have to say that it’s just fantastic to work for ROH,” said the six-year veteran.

It will not be Liger’s first time in ROH as he was featured 10 years ago in what was called “The Weekend of Thunder,” where he wrestled against Bryan Danielson, who is better known now as WWE World champion Daniel Bryan.

If that match with Liger didn’t bring Danielson to WWE, it certainly did improve his record and such matches could also help elevating Cole.

“WWE is on the top of the mountain and if I’d say that I would not want to have a Mania moment, I would be lying to myself,” admitted Cole. “That being said, watching ROH grow is very exciting and something I’m proud to be part of.”

But before thinking about Liger, he’s going to have his hands full with Steen in Toronto. The last time Steen was in the same position, challenging for the World title in Toronto, he didn’t disappoint his fans and began his first and only reign so far, a run that lasted 328 days.

Cole, who ranks seventh in that category with more than 230 days as champion, will do his best to improve that ranking, but Steen is not your ordinary opponent.

“Wrestling Steen in this environment, in his house so to speak, a year after he won that same title could very well be the biggest match and biggest test of my career, especially since there won’t be too many Cole’s supporters out there” he said.

Steen is unpredictable, said Cole. “It’s very hard to prepare for someone like Steen. Usually Kevin brings the fight to people so I’m gonna bring the fight to him this time.”

Born in Lancaster, Pennsylvania, Cole started training and wrestling for CZW back in 2008 and quickly became a mainstay for the promotion. He debuted for another super indy, PWG, in October 2011 and in December 2012, he became PWG champion, defeating … Kevin Steen.

His ROH journey started sporadically in 2009 and in August of 2010, he signed his first contract with the company. He was then put in a tag team act called Future Shock with Kyle O’Reilly, who was recently ROH tag team champion with Bobby Fish.

It was an experience Cole will never forget.

“I could not have asked for a better partner and for a better situation when I first got booked for ROH,” he said. “We grew up together in wrestling and we were really a tag team both in real life and in wrestling. I’m so proud of him and what he accomplished.”

On September 20, 2013, Cole became ROH World champion for the first time, defeating Michael Elgin for title vacated by the injured Jay Briscoe. If Cole manages to keep this title against both Steen and Liger, he could very well enter Nashville on June 22 as ROH champion.

On that particular Sunday night, ROH will make its live PPV debut from the Tennessee State Fairgrounds. For many years, the company taped shows that were shown on PPV on a later date, much different from the live experience. Since then, ventures into the expanding world of iPPV have been fraught with technological challenges.

Not only will the show in Nashville will be live, but it’s going to be on that traditional pro wrestling PPV time slot of 8 p.m. Sunday night.

“It’s a huge step up. It’s very exciting for the company,” said Cole, promising that “2014 will be the year of ROH. You’ve got the returns of Chris Hero and AJ Styles, then the announcement of New Japan and now our debut on PPV. It’s just great for the wrestlers and for the fans.”

In his role of champion Cole has no choice but to be the face of the company and he takes that role seriously. To be ROH World champion on June 22 would be something special for him.

“Personally, I found that very humbling. When I was a kid, I remembered being so excited when I was watching a WWE PPV and got to see the warning and policy screen at the beginning. Being the champion for that first PPV is a lot of pressure and you can make sure that I’m going to be walking there as the first ROH World champion on PPV.”

If he can survive the next two week-ends and exit Nashville as champion, Cole will definitely be on track for a career year in ROH.