It’s a testament to the way the Internet has grown through the years that an author can start researching a name from the late 1800s, which leads to another name and then a different one. Next thing you know, there’s a book.

That, in a nutshell, is how Tim Corvin came to put together the self-published Pioneers of Professional Wrestling: 1860-1899. 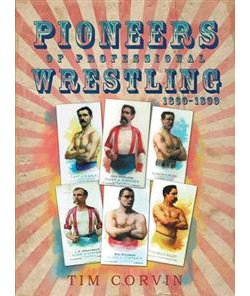 “I enjoy researching obscure history that few people know about and will never be found in any history books. So that interest combined with my lifelong passion for pro wrestling made this a natural project for me to pursue,” Corvin told SLAM! Wrestling.

His interest in pro wrestling stretches back into the late-1960s, and he has worked in various capacities for numerous independent wrestling promotions for the last decade and a half. By day, he’s a teacher in Dayton, Tennessee, who dabbles in documentary filmmaking as well.

Very little had ever been gathered on the era he targets in his book, 1860 to 1899. In part, it is because the most famous names such as Frank Gotch and George Hackenschmidt date from the beginning of the 20th century.

“Once I discovered that professional wrestling was happening prior to the 20th Century, I spent the next several months researching and documenting all that I could find,” Corvin said. “I ran an Internet search on the names of the two opponents mentioned, then among the information I found on them were the names of several of their opponents, so I searched those names and came up with more, and it continued to snowball. So most of the information in my book was what I researched and found over the Internet. What I didn’t find there was provided to me by various wrestling historians I reached out to.”He didn’t have a book in mind.

“I didn’t plan on doing anything with it beyond keeping it in my computer files and sharing it with anyone who might be interested,” explained Corvin. “But by the time I finished I felt that it would make a great book, since there are many fans today who will find this information as fascinating as I did, so why not share it publicly?”

Pioneers of Professional Wrestling: 1860-1899, produced through Archway Publishing, an arm of Simon & Schuster, explores the origins of mixed martial arts and pro wrestling in the United States, from the Civil War soldiers who wrestled in camps, to lumberjacks, miners, and railroad men. In all, more than 30 mat stars of the era are profiled, such as William Muldoon, Clarence Whistler, the original Strangler Lewis (Evan Lewis), and Farmer Burns.

Surprisingly, the book has a real international feel, with Canadians, Japanese, and of course, the Terrible Turk.

“I wasn’t trying to make this an international book, but I am pleased that it has that appeal,” said Corvin. “The many different wrestling styles of the time (and many of the wrestlers themselves) came from all around the world. There was a major influx of immigrants coming to America during this time, who brought with them their customs and traditions, including their wrestling styles. I believe everyone I profiled in my book had spent at least some time wrestling in America. I didn’t seek out foreign wrestlers, only those who wrestled in America or wrestled American wrestlers.”

Alongside the profiles and results are newspaper clippings, tobacco cards, lithographs, and many fun facts.

Also fun is imagining how some of the stars of the past would have fared in today’s outwardly worked version of professional wrestling.”The wrestlers I found most fascinating were those who I felt would fit quite well in today’s pro wrestling and MMA world,” said Corvin. “For example, Evan ‘Strangler’ Lewis (the original Strangler Lewis) was known as the dirtiest wrestler in the game. He would intentionally maim and cripple his opponents. There were reports of his opponents nearly being killed, coughing up blood with their entire heads turned purple. The fans hated him for his dirty tactics, yet they packed and sold out every arena he appeared in, and afterwards while the fans were booing and pelting him with garbage, he would graciously take his victory bow and hold up his championship belt amidst the pelting. So it appears the fans loved to hate him and he loved to be hated.

“Colonel James McLaughlin was another diabolical wrestler who would do well today. He literally killed at least three of his opponents. Clarence Whistler lived a reckless lifestyle, which attributed to his early death, just as so many of today’s wrestlers have unfortunately done the same. Farmer Burns, William Muldoon and others would also do well today as master mat technicians.”

What the book does not do is attempt in any way to establish exactly when professional wrestling became the staged spectacle we know and love today. It is commonly acknowledged that by the 1930s pro wrestling was pretty well all prearranged finishes.

But they apparently existed back in the 19th century as well.

“I did document anything I found that suggested that, or when the legitimacy of a match was called into question. Such as John McMahon, who was considered unbeatable, so after he lost a questionable match he was shot by someone who lost a big bet. Or that many years after the fact, a reporter wrote about overhearing William Muldoon and Theo Bauer discussing their worked matches behind the scenes. The rivalry between Muldoon and Whistler was also called into question.

“I think in a subliminal way, my information indicates that the legitimacy of matches being questioned began to occur more often in the 1890s, as this era was nearing its end. The same goes for any sense of sensationalism in wrestling, which first began to appear with the arrival of The Terrible Turk in the mid 1890s, who caused riots wherever he wrestled. I can equate him to several modern day ‘monsters’ in wrestling. The Terrible Turk was that era’s Abdullah the Butcher, Kamala, Umaga, The Great Khali and the like. So I think readers will see that as this era was closing, the sport was heading in the direction of what we recognize as pro wrestling today.”Naturally curious, Corvin continues to research old wrestlers, often with the help of historians like Don Luce and Mark S. Hewitt. There might be a second volume of Pioneers of Professional Wrestling down the road.