The Maritime provinces are getting an extra kick of estrogen in the coming two weeks, with a female-only wrestling tour hitting the cities and towns of Nova Scotia and New Brunswick.

It’s called Beauty Slammers: Ladies of Wrestling Tour, and is the handiwork of Devin Chittick, a veteran promoter and wrestler in the area.

Chittickhas been promoting for 13 years now, and has learned that there is a far better chance of succeeding and making a profit through tours than with one-off shows. In 2009, he ran 36 shows in 34 days in four provinces, and wrestled too, under his “X-Ray” Kyle Kruse. 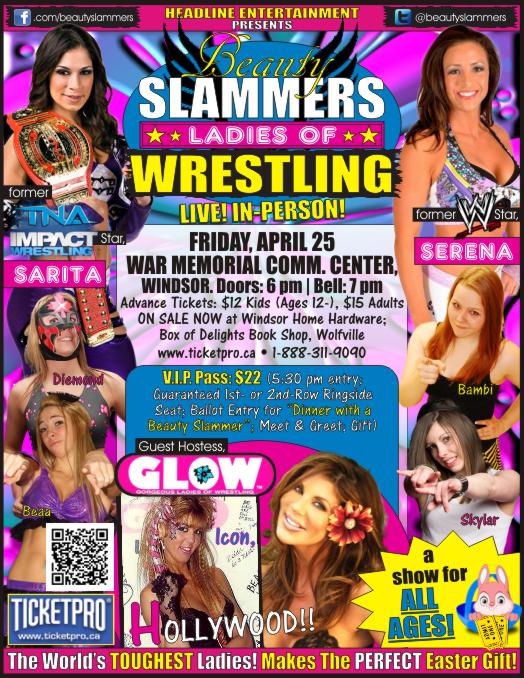 But this time it’s all about the girls.

The idea for Beauty Slammers came to him while watching the recently-released documentary on Gorgeous Ladies of Wrestling, better known to everyone as GLOW, the 1980s women’s only TV show.

“I never really thought more of it until I watched the GLOW documentary,” said Chittick. “It’s going to be something different than Atlantic Canada has never seen before.”

Headlining the tour is “Dark Angel” Sarah Stock, who was known as Sarita in TNA. It’s a homecoming for Stock, who was “Sweet” Sarah Stock during her early days wrestling in the Maritimes. Other names on the tour include former WWE star Serena Deeb, New Jersey’s Skylar Rose, Kaitlin Diemond of Ottawa, Beautiful Beaa from St. Catharines, Ontario, Serphantina of France and second-generation wrestler Bambi Hall of British Columbia.

Hosting it all is Hollywood of GLOW fame.

“I wanted to give the audience a little bit of everything and I think that’s what we’re doing,” said Chittick.

“I am more excited than anything to be hosting this new show with these incredible talented ladies, and I am very much looking forward to it!” wrote Hollywood (Jeanne Basonne) in an email.

For Kaitlin Diemond, it’s the chance to meet Sarah Stock and Serena Deeb that has her pumped.

The tie-in with GLOW makes sense too, she said. “Having Hollywood from GLOW brings a retro vibe to these shows and I know a lot of fans are die hard fans of that promotion,” said Diemond. “It was the first all women’s show so we have to honor them for being the pioneers.”

Hollywood has found today’s women wrestlers receptive to the history of GLOW: “If I was just starting out I would view it as a steppingstone to women’s wrestling… I think GLOW paved the way for the future of women’s wrestling today with comedy sketches, great characters, awesome costumes and singing!”