Following Kerry Von Erich’s suicide in February 1993, a lot of his memorabilia went missing, stolen from his home and at a benefit for Kerry’s daughters.

It took 21 years, but Bill Colville, a long-time friend of the Von Erichs, has found the treasures, stashed away in a dusty attic in Arlington, Texas.

The wonders of the Internet and Facebook are a big part of this detective tale. 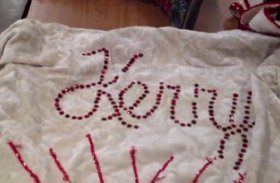 One of the robes that once belonged to Kerry Von Erich.

During the glory days of World Class Championship Wrestling, Colville parlayed his deep friendship with the family into a role as bodyguard/caretaker to the Von Erich boys at the height of their early ’80s fame.

The subsequent tragedies always hit him hard, but he never forgot his friends or the memories.

Colville wrote about what happened on his Facebook page: “20 years ago a trusted (well, I never liked or trusted her) employee stole a lot of Kerry’s personal possessions the night he died. The rest of his things she stole the night of the benefit for Kerry’s girls at the Sportatorium.”

The mystery was continually on his mind. “I’ve always thought I knew where they were, I just couldn’t prove it.”

A few months ago, he got a friend request on Facebook from DeAn Durham. He didn’t recognize her name at first, but veteran Dallas wrestler Chaz Taylor filled him in.

“She was related to the person I suspected and confirmed that yes, her aunt did have Kerry’s things and DeAn had always wondered why. She was young at the time and didn’t really question the legitimacy of her aunt having them,” wrote Colville. “There’s a long story I won’t go into here but suffice to say, we started a covert operation to get Kerry’s things back (she’s not crazy about her aunt either). Before we go any further, a police report was filed in Dallas, TX at the time and the Arlington Police Dept. has been made aware of the situation.”

DeAn Durham got the stolen items back and on Friday got them to Colville.

Then the story gets a little spooky to Colville.

“After loading the boxes in the back of the car, I drove a few blocks before turning on the radio. The radio was silent for a moment and then all of a sudden, ‘Tom Sawyer’ came on from the beginning!” he wrote. “For those that may not know, ‘Tom Sawyer’ [by RUSH] was Kerry’s signature song that we always went to the ring with. To make weird even weirder, the radio was unexplainably on a station I don’t listen to! I had goosebumps and called James Beard immediately. We couldn’t quit laughing thinking about Kerry nudging [his brother] Dave and with that look only Kerry could have when he was up to something say ‘watch this.'”

In The Pro Wrestling Hall of Fame: Heroes & Icons, Colville revealed the effect that ‘Tom Sawyer’ has on him: “I can’t even listen to it. I probably took Kerry to the ring 2,000 times to that song, over the years.”

World Class referee James Beard recalled the phone call on Facebook as well: “I’ve known Bill Colville a long time. Very few times I’ve seen him rattled. He was definitely shaken when he called me yesterday morning. When he told me what happened I felt a chill run all through me. Then, as we talked, the chill turned to laughter as we both could picture Kerry giggling away like he used to do when felt he had just gotten one over.”

The memorabilia includes photos, a visa for a trip to Japan, a passport, newspaper clippings, programs and magazines, and ring gear like trunks, boots and robes.

“I can’t say it wasn’t emotional unpacking and inventorying these things after so long,” wrote Colville. “Holding the robes one more time that I had held so many times before. How many times had those right robe sleeves been around my shoulder and my left hand gripping the back of the robes directing Kerry where I needed him to go through who knows how many countless thousands of fans in everything from high school gyms to syndicated TV shows in the biggest arenas in the world? I’m not sure emotional expresses it.”

In an email to SLAM! Wrestling, Colville revealed that he hopes to be able to share with finds with fans down the road, even as simple as getting a photo taken with one of the robes on a mannequin.

“It didn’t take me but a few minutes to realize that I needed to share the good news with the fans that after all this time still support, love and defend the Von Erich name and legacy,” Colville said.

He posted a video on YouTube showing the returned memorabilia:

Once Colville has completed an inventory, it will go to Von Erich’s family.

“It will all go to Kerry’s girls,” he said. “What is in the works right now if for some of it to go to PWHF [Pro Wrestling Hall of Fame] on loan from the girls. They can get it back whenever they want it. I have warehouses that I can store it in if they don’t have room. I’m going to take a complete inventory, photograph and catalogue the items for the girls and then they can come get them or if they don’t have room, I can keep them until they have room. I was always looking for those things to give back to them. Kerry’s grandkids need to have a sense of who and what he was to the public and have something to touch that was his.”