Cancer takes a beating thanks to Sixx and friends

The show centered around Ashley Sixx, wrestler and promoter, making his return to the ring after battling cancer. He won the main event, beating Michael Elgin, Ethan Page and Tyson Dux in a four-way bout. 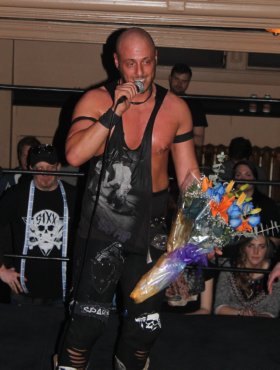 A winded, emotional Ashley Sixx addresses the crowd at the end of the show on Sunday. Photos by Greg Oliver

Post-show, Elgin told the audience about the respect he had for Sixx. “A couple of nice people came up to me here at intermission and said I was the strongest man they’d seen in professional wrestling,” said Elgin, who did a ton of his strength spots during the bout, including suplexing two men. “But Ash beat cancer, so I’d say he’s the strongest.”

What Sixx wasn’t was the most fit — and he admitted as much in an emotional 10-minute speech to the audience at The Great Hall in Toronto’s west end.

“I’m going to take a seat, because I’m freakin’ tired,” he said, as the partisan crowd chanted “Ash-ley Sixx.” Later, there was a “You’ve Still Got It” chant, but Sixx cracked: “I had it for about two minutes, then I lost my breath!”

The goal of Fight! 4 Cancer was to give a significant donation in support of The Princess Margaret Cancer Foundation

“So here’s the deal, folks. I went through nine months of chemotherapy, and I’ve been wrestling since I was 17, in high school. So this has literally been my life,” he said, talking about what a torture it was being away from friends and the ring.

“This year sucked man,” he confessed. “This is who I am. I’m a professional wrestler.”

As both the star of the show and the promoter, he got to choose who he wrestled. Sixx also had the band Time Giant play during the show, and perform “I Am The Fire” as he made his return to the squared circle.

Sixx talked about the three men with love and respect in his voice.

Hamilton, Ontario’s Ethan Page may look a lot like Fandango, but Sixx believes in him. “I’ve been telling him for years and years that as soon as he loses his gut, he’ll get signed by WWE.”

Tyson Dux is celebrating 18 years as a wrestler this week: “Without Tyson, I wouldn’t have grown to be the performer that I am today,” Sixx said of “the godfather of Ontario wrestling” who lives in Windsor, Ontario. “He hasn’t lost a step. He’s gotten better and better.” …

Later, Dux (@TysonDux) tweeted: “Welcome back to the brother hood @AshleySixx we missed ya and you killed it today #muchrespect”

Michael Elgin, a top contender for the Ring of Honor World title, said that he owes his career to Ashley Sixx.

“I started doing this when I was only 14. When I was 16, Ash saw something in me and said I could go on a road trip with him, and I had my first match. And the truth is that first match was for Truth Martini, and that man actually managed me and brought me in to Ring of Honor,” said Elgin. “So some of you might credit that to Truth Martini, but if it wasn’t for Ash, I would never have met Truth. Ash, from the bottom of my heart, you’re like a brother to me, I love you, I respect you, and I mean it, and people say it time and time again just to say it, but this is the God’s honest truth, I wouldn’t be where I am without you, so thank you.”

Sixx recalled meeting a teenage Elgin, who was wearing “zebra pants and a pink hat.” For that first trip to Michigan, Elgin called Ash and said, “I took off work. I’ll get fired. But I’m coming with you.” On another occasion, Elgin drove Sixx 16 hours to Minnesota just to possibly get booked, and he did, and they won the tag titles on the Saturday night “because that’s how good he is.” 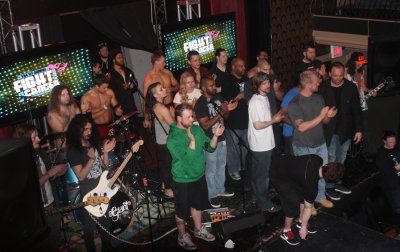 The locker room and the band Time Giant pay tribute to Ashley Sixx.

After thanking many of the friends who visited him in the hospital and kept up his spirits, Sixx got a standing ovation from the crowd, and the locker room, which had gathered on the ramp leading to the ring.

He warned the disease to watch out: “I’m going to punch that bitch in the face!”

Greg Oliver saw a ton of old friends at the show on Sunday afternoon, a tribute to the strength and passion of the Ontario indy scene. He can be emailed at goliver845@gmail.com, and you can follow him on Twitter @gregmep.