Give Insane Clown Posse YouShoot a pass, You know what I’m sayin’?

The latest YouShoot offering from Kayfabe Commentaries features the antics of the Insane Clown Posse. The DVD goes over the wrestling careers of Shaggy 2 Dope and Violent J and their participation in WWE, WCW, ECW and TNA as well as a short look into their musical careers.

As the interview begins host Sean Oliver leads the fully face-painted duo down memory lane about their passion for professional wrestling. They glowingly remember building their own wrestling ring in the backyard as 12 year olds and promoting shows. Shaggy 2 Dope was the perennial champion going by the handle of “White Tiger.”

Throughout their teenage years the ICP recalled being super fans as they would wait for hours outside the arenas in Detroit whenever a major promotion came to town. They were proud to say they shook the hand of every major star that ever set foot in Detroit except for Andre the Giant.

During those years they discovered that Al Costello of the world famous Fabulous Kangaroos worked as a security guard in downtown Detroit. He took the time to talk to the young men and on his breaks would teach them rudimentary wrestling holds. 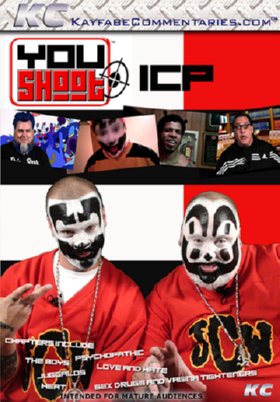 Sean Oliver creates a positive atmosphere where the ICP comfortably recall their first steps into the wrestling world working alongside the likes of Rob Van Dam, Sabu, Bobo Brazil and the Original Sheik. They felt that they had a great rapport with those guys as well as many others in the wrestling business.

One segment featured the ICP declaring who was cool and who was not. Most often they said that guys were cool and that the individuals had worked for their promotion. The impression was made that they had tight relationships with their employees and peers.

Around the 30-minute mark, the video became increasingly irritating. Both Shaggy 2 Dope and Violent J’s continual destruction of the English language becomes alarming. “You know what I’m saying?” is used multiple times in every segment. Quite frankly, it became difficult to understand what they were saying throughout the interview.

They came across as two guys who were laughing and having a good time as if they were in on a joke. Even recounting that while working with the Headbangers in the WWE they were beat up on live TV. The ICP quickly pointed out that the Headbangers work for them today and everything is cool. Of course it is. You are paying them. How many people punch out their boss? You know what I’m sayin?

The ICP is caught off guard when Earthquake (John Tenta) is quoted as not liking the pair’s attitude. The clowns were aghast that their boy who they were tight with would say such a thing. It was quickly reasoned that Earthquake probably was just upset about his positioning in the WWE at the time.

While the interview dragged for long sections there were some interesting nuggets about their music careers. The feud between the ICP and Eminem has been put to rest after their respective groups went out for beers and bowling. The process of writing lyrics and problems in their business lives were quickly discussed.

A funny section of the video explored the differences between ring rats and music groupies. Violent J goes into detail describing the look of an average rat compared to a groupie. In the end he decided that musicians get much hotter women.

As stated earlier the clowns really felt they were tight with the wrestlers. They laughed about their experiences with wrestlers good and bad. Even a terrifying encounter with the intense Chris Benoit gets chuckled away. Tommy Dreamer giving them the evil eye is seen as hilarious. Steve Austin tried to make small talk with them and they couldn’t find any common ground, so funny. Rob Van Dam kicked Violent J so hard his ear drum burst, which was a knee slapper. Mike Awesome power bombs Shaggy 2 Dope onto a bus, again serious injury becomes funny. Sting tries to explain to them that they have heat. ICP found that to be uproarious. You know what I’m sayin’?

It was not until the clowns get to listen to their tight buddies and employees discuss their shortcomings that their attitude changes. The ICP is shocked to hear that their boys would say that or they would claim that they were never there for that event. It was at that point the ICP stopped joking around. Perhaps they were the joke?

At a running time of 133 minutes, this You Shoot interview is 100 minutes too long. The tedious use of “You know what I’m saying?” and being oblivious to the disrespect that the wrestlers gave them is sad. This is one Kayfabe Commentaries production that is not worth paying for — unless you a serious Juggalo.