The Ultimate Warrior dead at 54

Shocking and saddening news came out late Tuesday night. Less than a day after appearing on Raw to celebrate his 2014 WWE Hall of Fame induction, the world of professional wrestling lost The Ultimate Warrior at the age of 54.

While the cause of death has yet to be released, TMZ reported late Tuesday night that the Warrior collapsed outside his Arizona hotel while walking to his car. The report goes on to say his wife was with him at the time. 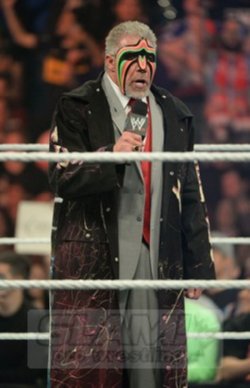 The Ultimate Warrior on Raw on Monday night. Photo by Mike Mastrandrea

Born James Hellwig, Warrior spent nearly 15 years in the business of professional wrestling. Starting in a tag team with Steve “Sting” Borden known as the Blade Runners, Warrior spent time in the CWA, UWF, and Mid-South before moving on to a solo career in WCCW. From there, his rise to fame came in two stints the then-WWF under the Ultimate Warrior persona. After a year in WCW, Warrior retired from the business until wrestling his last match on June 25th, 2008. The highlight of his career was being the first wrestler to hold both the WWF Intercontinental and WWF Championships simultaneously.

Making his final television appearance on Raw, Warrior donned a mask of his signature face paint and spoke to the fans. In retrospect the promo seemed prophetic.

“No WWE talent becomes a legend on their own. Every mans heart one day beats its final beat, his lungs breathe their final breath. And if what that man did in his life makes the blood pulse through the body of others and makes them bleed deeper and something larger than life then his essence, his spirit will be immortalized.”

The passing was reported on WWE Executive Vice President of Talent, Live Events, & Creative Paul “Triple H” Levesque’s Twitter page and confirmed on the WWE website. Warrior was survived by his wife, Dana, and two daughters.

More information will be reported as learned