If Japanese, American and Canadian women wrestlers have a strong reputation, Australian women have seen their stock rise as well. Madison Eagles was ranked the number one female wrestler by the Pro Wrestling Illustrated in 2011 and Emma has been dancing away on WWE Raw for for several weeks now. Another Aussie, the “Rate Tank” Kellie Skater, is also performing on an international level and compares favourably to her mates’ successes.

If you follow the women indy scene, you know her already. If you don’t, you need to.

Kellie Skater has been wrestling everywhere in the last two years. From NCW Femmes Fatales in Montreal to SHIMMER in Chicago and from Joshi4Hope in Japan to PWWA back home in Australia, the 26-year-old blonde has gained a lot of experience in that period of time. 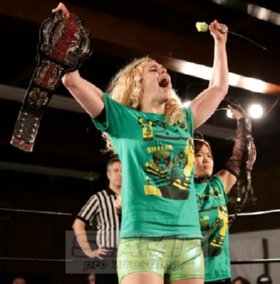 She first got her chance to make it in Japan through S Ovation/Joshi4Hope promotions and has stayed loyal to them ever since.

“I really love it over there! The training is so amazing, as is the quality of shows. I get great support from the Japanese fans. They are awesome and respectful. I speak more Japanese now than I did when I debuted — and have gained a bigger fan base definitely. It’s been wonderful,” said Skater.

“That was a wonderful experience. It was a great show with some amazing talent. I was lucky to get a chance to wrestle for them, especially against a close friend. Mutoh (a.k.a. Great Muta) is a legend. So it’s a great chance! … It’s a positive company which deserves the chance to grow.”

If Aussie wrestling is pretty much the same as the North American style — character and psychology based — Japanese wrestling, even for women, is very different.

“Japanese wrestling is very hard-hitting, as well as also having some amazing lucha thrown in,” answered the one who everyone calls “Tank.”

Back in the United States, she is teaming with Tomoka Nakagawa. Known as Team 3G (for Global Green Gangsters), they are the SHIMMER tag team champions, as they defeated the Canadian Ninjaz of Nicole Matthews and Portia Perez last year.

“It was the biggest moment of my career. Incredibly important. I was a fan of SHIMMER before I debuted for them. So to hold one of the titles is an amazing feeling. Especially to share it with Tomoka,” said Skater, who also has to work a regular job half of the year back home.

“Tomoka is one of the best people I have ever met. I’m proud to not only call her my tag partner but one of my best friends. We get along genuinely well. We started tagging in Japan because of our real friendship/drinking partner status,” she added, noting she was hanging out with her partner as she was doing this interview.

Most recently, they had to defend the titles in Japan against the team of Evie and Madison Eagles. 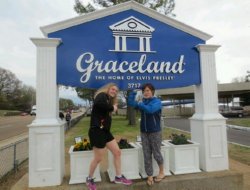 Where else do an Australian and a Japanese wrestler go when in the United States? Graceland! Courtesy @ratetank on Twitter

“It was a huge moment for us. Japan is Tomoka’s home. My second home. It really felt special. I was proud to defend the titles in front of the Japanese fans who have supported me so well on my tours.”

As mentioned before, there are a lot of Australian female wrestlers on the scene.

Madison Eagles was SHIMMER champion for a long time. Everybody’s favorite girlfriend Jessie McKay is a huge fan favourite everywhere she goes. Shazza McEnzie is a very good up-and-comer who wrestles for SHIMMER too. Evie (although she’s from New Zealand) is the most recent addition to the group and she’s already known for her great stiff kicks.

Being so far away from home, do the compatriots get along or fight for the same spots?

“We actually all get along great!” Skater answered quickly. “I love those girls dearly. Evie is one of us, my partner in crime often! All the PWWA/SHIMMER girls are good friends. We have a great time travelling and have made great memories.”

Emma, another Aussie, made her Wrestlemania debut last Sunday, as part of the Vickie Guerrero Divas Championship Invitational.

“I’m proud of her. She’s doing amazing. I’ve known her for years. We debuted at SHIMMER together and wrestled in Australia. It’s a wonderful thing for her to wrestle on such a huge stage. I’m happy for her and wish her the best!” 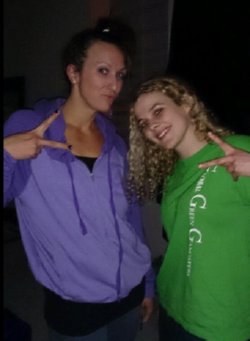 After having a great reaction and good matches in NXT, Emma was promoted to the main roster in a comedy role with Santino Marella. But for Skater, it’s all about being up there.

“It’s a way for her to get noticed. At the end of the day that’s a huge thing. I think it helps her a lot.”

Would she like one day to join her countrywoman and work for WWE?

“Of course, WWE is something I would be interested in. It’s not the be all and end all for me, though. If I never make it, I will have no regrets. However, of course it’s a goal, as it should be,” she said.

Last week-end in New Orleans, Tomoka and Skater kept their titles against the odd team of Nicole Matthews and Madison Eagles. This weekend, she will be in Berwyn, Illinois, for SHIMMER, taping for DVD volume 63 through 66.

What can fans expect from those shows?

“Quality! I think the shows will be something special. Our roster is talented and with so many girls hungry to prove themselves. Looking at our roster this time I have big expectations,” said Skater, adding that she keeps an eye on the SHIMMER title, currently held by Cheerleader Melissa, but focusses on defending the tag titles for now. 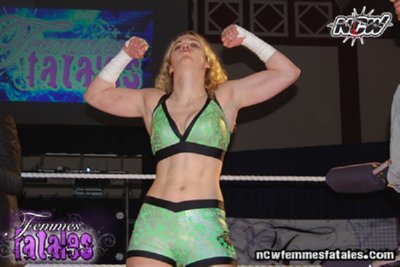 The “Rate Tank” during an appearance in Montreal at NCW Femmes Fatales.

With so many bookings in Japan, Australia and the U.S., she hasn’t come in Montreal for Femmes Fatales in a long time.

“I would love to return. Femmes Fatales is a wonderful promotion with great fans. I don’t know when I will be back, but I hope soon!”

Not that she has anything against the Commonwealth or the land of the free, but Skater’s heart is definitely with the Land of the Rising Sun.

And she explained why.

“I was a Bull Nakano and Jumping Bomb Angels fan as a kid. I got exposed to more Joshi when I started training and fell in love with All Japan Women. I would love nothing more to be in an era which rises back to their heights. I would like to see Joshi get back to the popularity it was in its peak and work shows then. That’s the ultimate goal. In the right circumstances I would definitely move to North America. However Japan is my happy place. I would consider moving there a major goal of mine,” she concluded.

Pat Laprade once went to a Montreal Canadiens hockey game with Kellie Skater. She saw Pat win a dance contest there — really! Get your own dance tips from Pat through his Facebook page and his Twitter account.