The conversation begins with “G’day,” and is peppered with Australian lingo like “brekky” and “mate.”

So it seems reasonable to assume that Kellie Skater’s nickname, “The Rate Tank,” is another nugget of Aussie slang that only makes sense to people Down Under.

Nope. Hardly anybody, Australian or otherwise, understands what “The Rate Tank” means. Thankfully, Kellie Skater — a petite but pugnacious rising star of SHIMMER and other women’s wrestling promotions — is more than happy to translate her unusual moniker: 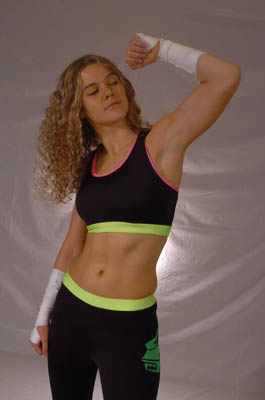 “A few other wrestlers from Victoria and I just kind of made up the term,” says Skater (Callee Ann Keating outside of the ring) during a Skype call from her home in Bacchus Marsh, a picturesque small town just west of Melbourne.

“The word ‘rate’ is the equivalent of ‘very,’ like if something is very awesome we’d say it’s ‘rate awesome,'” she explains. “I used to be very small — I was tiny compared to everyone else — but I would just say: ‘Whatever, I’m a tank, mate! I’m a rate tank!”

That Napoleonic attitude is Skater’s trademark — the pompous (and often misguided) belief that, despite her diminutive stature, she is exceptionally powerful and dangerous.

Canadian fans will get a first taste of Skater’s self-aggrandizing personality when she takes on Sweet Cherrie at the NCW Femmes Fatales event on March 12 in Montreal.

LuFisto, a French-Canadian brawler who has tussled with some of the toughest women (and men) in the business, has experienced Skater’s megalomania first-hand. “She is one of the biggest mouths I know,” says LuFisto, who’s headlining Femmes Fatales against Ayako Hamada.

“Pretending she is indestructible although she is rather thin, The Rate Tank will let the fans know how she feels… during the match and after!”

The brash persona is, Skater concedes, not a true reflection of her personality outside the ring, but rather an absurd amplification of her more mischievous side:

“When I’m (in character) I believe I indestructible, that I could move the Incredible Hulk. I think that I’m the biggest, the baddest, the toughest. I’m completely delusional.”

Such delusions of grandeur are what inspired Skater to step into the ring with Amazing Kong (the former Awesome Kong of TNA), who literally dwarfed and squashed the scrappy Australian.

Those same delusions led Skater to grab a microphone at a recent SHIMMER event and issue an open challenge to anyone in the building brave enough to step into the ring with her. Much to her surprise — and to the delight of the live audience — Skater’s challenge was answered by Serena Deeb, last seen on WWE television as a shaven-headed member of CM Punk’s Straight Edge Society.

“She accepted my open challenge and gave me a whoopin’,” recalls Skater. “But I loved being part of that moment, the holy-crap-Serena’s-back reaction from the crowd. Nobody knew she had left WWE, nobody knew she was there. It was great.” 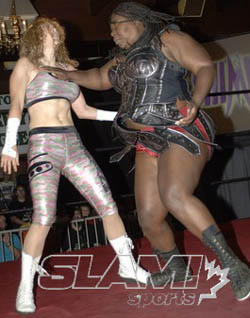 Kellie Skater takes a chop from Awesome Kong at the SHIMMER taping in September 2010. Photo by Buddy LaMantia

Taking a whoopin’ is one of Skater’s specialties, given her yappy-Chihuahua-in-a-pit-bull-kennel bravado.

One match in particular left Skater with some battle scars as mementos of her foolish courage. A quick Google Image search for “Kellie Skater” will turn up photos of the Aussie pointing to ruby-red welts on her chest — a grotesque patchwork of bruises and broken blood vessels created by a barrage of knife-edge chops from opponent Mercedes Martinez.

“That’s what happens when you decide to start a chop-off with Mercedes,” laughs Skater, whose chest has since returned to its normal fleshtone. “That chop-off was another one of my brilliant ideas. I started it, and she finished it. But hey, I’m The Rate Tank — I’m indestructible, right?”

Skater will spend a month in North America following the Femmes Fatales event in Montreal, travelling with a group of fellow Aussies and wrestling in a number of promotions in the American northeast.

She says Australian wrestlers are gradually getting more exposure in North America — a market that has seen very few stars from Down Under (aside from Outback Jack, a silly amalgamation of Aussie clichés who emerged, and vanished, during the Crocodile Dundee craze of the 1980s).

But Skater is not interested in portraying a crocodile-hunting, koala-cuddling Outback Jane. She wants to be known for her in-ring talent, not her nationality.

Given that she’s only a few years out of wrestling school, she’s got some serious momentum. She’s an expert at riling a crowd, she can unleash a belly-to-back bridging suplex that would make Dean Malenko salivate, and she recently ranked a respectable 37th on Pro Wrestling Illustrated‘s “Female 50” list.

Ultimately, she hopes to wrestle full-time for a major promotion in either North America or Japan, because the occasional commute back and forth to Australia is a long haul accompanied by horrendous jet lag.

Until she hits the big leagues, she’s more than happy to learn and ply her trade at smaller shows on both sides of the planet.

When she gets to Montreal in March for her first-ever match in Canada, she hopes to “have some fun while irritating people” as only The Rate Tank can.

There’s one more thing she’s hoping for in Montreal: snow. She has only seen it once in her life, and it was on top of a mountain.

“I just want to see it on the ground so I can jump in it,” she says. “I think that would be just phenomenal.”

One might even say it would be rate phenomenal.