The evolution of TNA has been nothing short of amazing. From its humble beginnings as a struggling small promotion running weekly pay-per-views featuring a roster full of veritable unknowns, the company has grown to an international entity with weekly programming and is home to some of the biggest names in wrestling history. The progression is plain to see when looking at two of the company’s newest DVD offerings, Best of the Asylum Years – Volume 1 and TNA’s Greatest Moments. 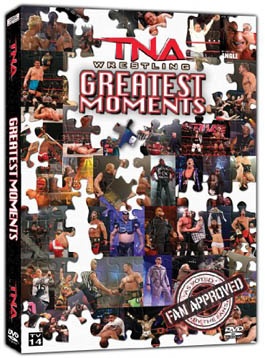 Asylum Years covers the stint between 2002 and 2004, when TNA ran exclusively in the Nashville Fairgrounds Sports Arena. Interviews taken with many of TNA’s key players, including Jeff Jarrett and Dixie Carter, provide detail on the mindset of the company during this period, a mindset focused on survival. Though the odds may have been stacked against them, they say, failure was not an option. All they could do was keep presenting the best product that they could, and hopefully the fans would respond.

The double-disc set includes over 20 matches which are a good cross-section of that product, and indeed there are several gems in this collection that many people may never have seen, particularly if they are only recent viewers.

An example of that is the first match on the set, which pitted Sabu against Ken Shamrock for the then NWA-TNA title. The unique stipulations of this match, designed to showcase both men’s specialties, were that the match could be won either by climbing a ladder and retrieving the belt, or by submission. The combination worked quite well, and the match was very good, despite the over-booked finish that added outside interference to the mix.

Other solid matches include a three-way ladder match for the X-Division featuring Jerry Lynn, AJ Styles and Lo-Ki, AJ Styles vs Kazarian in one of the first TNA matches to take place in the six-sided ring, the company’s first steel cage match between America’s Most Wanted and Triple X, and one of Jeff Hardy’s earliest appearances in TNA against “The Alpha Male” Monty Brown, who became a major breakout star and, had he stayed, could easily have been the flag-bearer for TNA even today. All of these match showcase the X-Division and the general faster-paced, action-oriented style that defined TNA in the early years. Matches involving AJ Styles and Abyss are definitely highlights of the set and really highlight how important these two are to the company, even today.

Another important trademarks of TNA was the bringing in of veterans to face off against the younger stars. Asylum Years includes a number of such matches, with stars like Shane Douglas, Terry Funk, Sting, Dusty Rhodes, and Lex Luger. The interaction between these legends and the young wrestlers who would ultimately go on to become major names themselves (case in point: one of Funk’s opponents in his match is CM Punk), helped add credibility to TNA, in addition to just being good matches in their own right.

Of course, this era of TNA was synonymous with Jeff Jarrett’s lengthy and controversial title reign. Through chicanery, outside interference, and general heelishness, Jarrett kept a vice-like grip on the belt against all challengers. One of the best build-ups to a title match in these early years was Raven’s challenge, one that fans were desperate to see end successfully. Their title match from April 2003 is included here, and, despite the formula being the same, the match itself definitely lived up to the hype.

Which is a general comment about the entire Asylum Years set. With many of these matches not having been on any previous DVD release, this is an excellent way to watch the company in its formative years. The focus being on in-ring action is a smart move, and by leaving out the bad gimmicks, stupid characters and convoluted storylines of that era, it clearly lives up to its “Best of” title. For long-time fans, this will be a great nostalgic look at the company that lets you relive some of the historical highs, and for newer fans, it will be a great way to see where the company’s roots were formed.

Compare this with the other recent release, TNA’s Greatest Moments, which featured only two complete matches in its look at the company in the years since 2007. This one is harder to recommend, since it’s very hit-and-miss, not necessarily in what was covered, but in how it was presented.

The first sign of where this DVD is going is in the first section, which is comprised of Hulk Hogan’s greatest moments. The press conference held at Madison Square Garden is featured, as is Hogan’s TNA debut from January 4, 2010. In hindsight, seeing how little good that Hogan’s involvement has actually done in terms of boosting ratings or buyrates, it’s somewhat ironic that this is considered one of the company’s greatest moments, but I digress. This section also features the entire match between Hogan and Abyss against Ric Flair and AJ Styles, a low-light in this reviewer’s eyes. 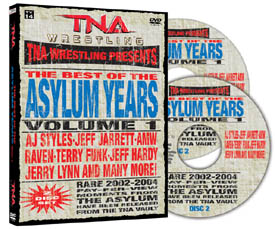 The rest of the three-hour DVD is a mixed bag of match highlights set up by interview segments with the parties involved. Yes, true to its title, the set does not concentrate on matches, but rather on moments.

Topics covered include the company’s championships, Sting’s Bound for Glory performances, debuts by various stars, and a grab bag of other topics. Unfortunately, due to the slap-dash manner in which they are presented — a short interview segment followed by an even shorter clip of the moment in question — contradicts the importance that they are trying to convey.

What’s particularly frustrating about the interview segments is that these are largely done in character. It would have been so much better to hear the candid, real thoughts of the parties involved. Interviews in character just come across as goofy — it’s not like they’re playing heel to a live crowd, so burying an opponent doesn’t do any good. Similarly, when AJ Styles — who is a genuinely nice guy in person — boasts arrogantly about becoming the first ever Grand Slam champion, it just comes across as a lazy way to produce a DVD.

So, too, are moments where the subject doesn’t even remember the moment in question, as when Brother Ray forgets his opponents when talking about Team 3-D’s 23rd championship win. Seriously, they couldn’t have refreshed his memory before the cameras started rolling? If he doesn’t care, why should the viewer? And why should that moment be thought of a one of the company’s “greatest moments?”

If there is something good to say about Greatest Moments, it’s that at least the company doesn’t shy away from its history, including moments featuring those of stars who are no longer with the company, like Gail Kim, Booker T, and Scott Steiner. But if that’s the highest praise that can be given, well, that tells you what you need to know about this set.

It’s unfortunate that TNA’s Greatest Moments isn’t better, since the subject matter offered so much potentially stellar material. For newer fans, it may provide enough broad information at not too deep a level, which may help them get up to speed. But for long-term fans, there is little here to recommend — this is for completists only.