With the explosion of British-born grapplers onto the U.S. wrestling scene, there it’s clear to see that there’s a lot of interest from both WWE and TNA in what’s happening on the UK independent scene. The next name hoping to follow the likes of Drew McIntyre, Wade Barrett and Doug Williams is “Lionheart” Adrian McCallum.

The three-night TNA Maximum Impact tour of the UK rolled through to the Braehead Arena in Glasgow, Scotland on January 27th and it was here that Lionheart was given the opportunity of a lifetime as he stepped into the ring with none other than TNA founder, Jeff Jarrett. 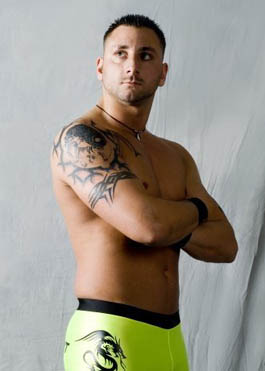 “The King of The Mountain” challenged the young Scot to a match worth $100,000 of his own personal money, with the purse going to the winner. Undoubtedly, this was a chance for Lionheart to make a big impression and further build up a reputation by competing against a veteran such as Jarrett.

The talented McCallum has long garnered great praise for his charismatic and exciting in-ring performances. Training at the BCW wrestling school in East Kilbride, Scotland, the popular Scotsman shared the same training space as WWE star Drew McIntyre, who along with “Highlander” Colin McKay, had a big hand in his development.

Long before he had even started training, Lionheart was a big pro wrestling fan. As a small child he recalls watching the show and marvelling at what he would see on the TV screen.

“Like many, my heroes growing up were guys like Hulk Hogan. Then as the times moved on, it became performers such as Bret Hart and Shawn Michaels who grabbed my attention,” he told SLAM! Wrestling.

“As I grew older and began training, I looked up to a lot of guys and I guess you could say I molded myself on them, with the main pair being The Rock and Chris Jericho — who have both had such a huge knock-on effect on my career.”

With a look and build similar to TNA star A.J. Styles, it’s obvious to see why TNA have shown interest in one of the biggest names in Scottish wrestling today. Standing six-foot, and weighing 220 pounds, McCallum has the size and experience necessary to realistically appear to be a challenge to everyone on the promotion’s roster. Having come about due to an email from another TNA superstar, Doug Williams, the chance to wrestle for one of the biggest wrestling companies in the world is something Lionheart had been building towards for quite some time.

“I had been pursuing TNA for a while now, sending DVD footage, promotional pictures and the like. Recent developments with the British Wrestling Council may also have been a factor in sealing the opportunity as well. The match itself was put to me by TNA management and I obviously jumped at the chance!”

The British Wrestling Council is an organization set-up to ensure there are safer regulations for wrestling schools and shows in the country. It has proved a very popular addition to the pro wrestling scene in the UK and looks to put in place certain high standards to establish a safe and healthy working environment for each promotion and its performers. Lionheart is behind this move 100% and feels the group has helped him greatly to get to where he is today. 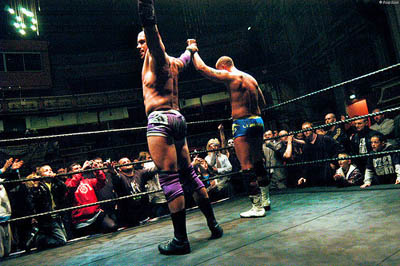 The match against Jarrett was a huge opportunity for the young but experienced Scottish grappler and he is beginning to see the possibilities of realizing his dreams of wrestling for WWE or TNA on a full-time basis, much like some of his peers have done.

“The chance to wrestle for one of the bigger promotions is now there, yes, and has been for the past few years. When you’re young and starting out, your goals are very modest. Often times people will confuse goals with dreams. Obviously I’ve always dreamt of making a full-time living from wrestling in America, but I never believed it to be a realistic goal until recently,” he said.

Lionheart will also take confidence in the fact that some of his friends are now established names with some of the top companies in the world.

“When Drew left for WWE and you now see guys like Doug Williams are household names in TNA, it’s inspiring and gives you that hope that with the proper dedication, anything can be possible.”

It’s no secret that the wrestling industry as a whole is crying out for new stars to be made, seemingly overnight. WWE and TNA are eager to find men and women who can carry the business into a new generation and there seems to be a real drive to create another lucrative period such as the “Attitude” era of the late 1990s and start of the new millennium.

The hype in the mainstream media for the match was been nothing short of astounding. Professional wrestling in Britain rarely features in nationally published newspapers or magazines but the publicity was been huge. This will only help TNA as a business and seems to be an extremely smart strategy. Wrestling fans in this country are fiercely loyal to their home-grown stars and enjoy living their own dreams through these men and women. 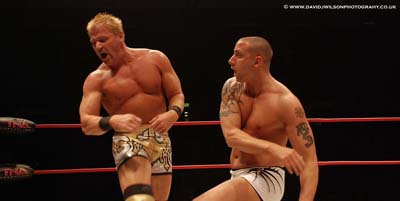 Jeff Jarrett is knocked for a loop by “Lionheart” Adrian McCallum. Photo by David J. Wilson

On the night, Lionheart came up short against Jarrett, but he will take heart from his performance on such a grand stage. If anything, there was perhaps more pressure than normal on McCallum due to his big break taking place in front of an expectant home crowd, but the charismatic Scotsman never looked out of place.

Defeated with the help of yet another guitar shot to the skull, Lionheart will surely see the match as valuable experience in his quest to wrestle for one of the larger wrestling promotions in America. TNA will have been pleased themselves with the media reaction and fan response to the young Scottish performer and may endeavour to use him again when touring here in the future.

McCallum is upbeat about his chances of truly making it as a professional wrestler for TNA or WWE and is clearly happy with his own performance.

“I’m as prepared as I can be. Physically and mentally I’m ready. As for where my career goes from here? We’ll just have to wait and see.”

Jamie Kennedy is a freelance journalist from the United Kingdom who has worked for many wrestling websites and publications, including SLAM! Wrestling, World Wrestling Insanity, Bored Wrestling Fan and The Wrestling Press.