Only in professional wrestling would men and women be seen walking the tops of cages like they were tightropes, soaring through the air like Superman and jumping off 20-foot ladders. And the best part is that some of the greatest high fliers of all time live to talk about it.

“I think a lot of this stuff is learned on a trampoline or a diving board or stuff like that. It all comes down to not being afraid to try them out in the ring, where you could actually get hurt,” said former TNA World Heavyweight Champion AJ Styles.

Learning to fly is one thing, but learning to fall is a much more important skill to master. This is why most, if not all wrestlers would agree that one must be comfortable on the ground first, because if someone doesn’t know how to land, then he/she is more than likely to crash. 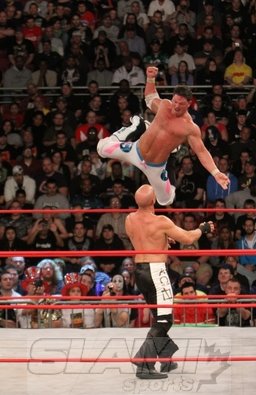 AJ Styles launches himself at Christopher Daniels at TNA Bound For Glory in October 2011 in Philadelphia. Photo by George Tahinos

TJ Perkins, who currently competes in TNA as Manik, learned this lesson at only 13 years of age. Of course, he wasn’t taking flight as frequently back then, but he did pay attention to everything that he was taught and was well aware of what he needed to do to avoid injury.

“In wrestling school, you just kind of learn the basics, so you can go out there and not get hurt. And then you’re eventually placed on an undercard, where you’re basically kind of fed to the wolves,” Perkins said. “It’s a very seat-of-the-pants type learning, where you just kind of pick things up as you go. You learn through experience.”

For the longest time, there weren’t a lot of high fliers in the United States; at least none that were headlining shows. Many of them were making names for themselves in places like Japan and Mexico, but American fans were just not used to seeing that style of wrestling yet.

But that all changed on October 17, 1983. It was on that date that all of Madison Square Garden, including a very young Mick Foley, witnessed Jimmy “Superfly” Snuka fly higher than any pro wrestler before him, off the top of a steel cage, and land with a splash on then Intercontinental Champion Don Muraco. This opened the door for many more high fliers to establish careers for themselves in the WWE.

Another man who was collecting frequent flier miles at the time was Randy Savage’s younger brother, Lanny Poffo. Though most people remember him as The Genius, some might recall that he was also Leaping Lanny Poffo.

“I was a gymnast since I was eight, and I competed until I was 10. After 10, I realized that I just didn’t have the body for the Olympics, because I was too big. A lot of gymnasts who are that size were getting hurt, doing all those manoeuvres,” Poffo said. “In my day, high flying moves weren’t as common. I would work on manoeuvres that wouldn’t require any cooperation from my opponent. I’m proud of the fact that I never hurt myself or my opponents in my 21-year career.”

As the aerial style of wrestling was increasing in popularity in the United States, Canada was creating its own high flying superstars such as Owen Hart, Brian Pillman, Chris Benoit and The Dynamite Kid. They would all eventually become huge stars in the WWE, but before that, they were flying all over Japan, competing against the likes of Jushin “Thunder” Liger, The Great Sasuke and Tiger Mask I-III; guys who would also later compete in North America.

Wrestling was probably the most common term used in the Guerrero household, as there were three generations of Guerreros in the business. The patriarch of the family, Gory, passed on years of expertise down to his four sons. The Guerrero brothers may have learned how to fly later on, but they were all born to wrestle.

“I had my own style. I’d wrestle and I’d put in my high flying moves. A lot of people call it Lucha, but to me, it’s just wrestling,” said Chavo Guerrero Sr., the eldest Guerrero brother. “My father was a wrestler. We were taught to wrestle; we were taught the basics. From the beginning, we were taught how to stand and how to use the ropes right and how to fall. Eddie was more into what you call Lucha.”

Chavo Sr. was able to learn from not only his father, but also some of the greatest technical wrestlers in the world at the time, such as the Funk brothers (Dory Jr. and Terry). He’s also been in the ring with guys like Roddy Piper in the States and Atsushi Onita in Japan. But that didn’t mean that he couldn’t fly around with the best of them. After all, he was a former WWE cruiserweight champion.

This would prove so important in the mid-late ’90s. There was a unique style of wrestling that was introduced to the majority of American fans around that time. Chavo Sr. referenced it earlier; it was called Lucha Libre, and it had many fans literally coming out of their seats.

The success and popularity of such legends as Gory Guerrero and El Santo in Mexico was enough to attract the attention of American promoters like ECW’s Paul Heyman, who jumped at the opportunity to sign some of the luchadores, because he always dared to be different, and it worked very effectively. So effectively that it caught the attention of Eric Bischoff, who eventually signed a lot of these luchadores to WCW as well. 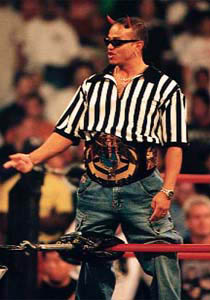 Guys like Eddie Guerrero, Rey Mysterio and Juventud Guerrera were now working where the big boys play. But they would also have to quickly adapt to the American style, when in the ring with a non-luchador. Then again, some guys didn’t mind the faster pace. Eddie Guerrero alone had fantastic matches with Chris Jericho, Dean Malenko and 2 Cold Scorpio. But these guys would also have to adapt to the Lucha style, which they didn’t seem to mind either.

In today’s business, safety always comes first, which really makes a lot of sense. Not to say that it wasn’t a priority about 20 or 30 years ago, but perhaps one of the best ways to ensure safety is for someone to know who he/she is and who he/she is in the ring with.

“Back in the day, whenever the matches were on, everybody watched everybody’s match. A person like Dean Malenko was a 1,000 hold man. A guy that’s got 1,000 holds has forgotten more holds than most kids know. You got to figure that at any point, he can flip, he can fly, but he’s a ground-based wrestler. He’s going to tie you up in a knot and try to keep you on the ground,” Scorpio said. “Then again, when you’re working somebody like The Nasty Boys, they weren’t going to try any high flying or anything like that; they just wanted to beat the sh– out of you, period. You shouldn’t be worried about, ‘Is this guy going to be able to take this?’ because bottom line is that if you can’t take it, you shouldn’t even be in the business.” 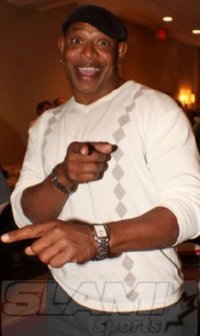 2 Cold Scorpio in October 2011 at a fan fest. Photo by Christine Coons

Despite the fact that these cruiserweights were consistently having the best matches of the night, they just couldn’t elevate themselves above the mid-card. It was frustrating for some, but that was about to change.

When the WWE purchased WCW from AOL Time Warner in 2001, the company established its own cruiserweight division, utilizing former WCW stars such as Billy Kidman, Chavo Guerrero, Shannon Moore, Gregory Helms, Ultimo Dragon, and Rey Mysterio. The company attempted this kind of thing before, with its semi-regular and Japanese WWF Junior Heavyweight Championship from 1967-85, and its Mexican-flavoured light-heavyweight division, but it never really achieved the same level of success that WCW’s cruiserweight division had.

This time around, the division had a much longer run. The cruiserweights quickly became a highlight of Smackdown, and picked up right from where they left off in WCW.

“At the time when Vince had the cruiserweight division going with Kidman and Chavo and Rey and Eddie, man, what matches they would have; that made the whole show,” Chavo Sr. said. “They were so good and so fluent. I enjoyed the hell out of that.”

While this was going on in the WWE, there was another company that was starting to make a little noise in Orlando, Florida. It wasn’t Walt Disney World; it was Total Non-stop Action. This was another wrestling company and it lived up to its name completely, due in large part to its own cruiserweight division, which it referred to as the X-Division. Actually, it wasn’t a cruiserweight division at first. In fact, there were no weight limits to speak of, but going by the way some of the wrestlers would fly around the ring, nobody could really tell the difference.

“Being able to adapt to anyone in professional wrestling is the key to being one of the best in the business. Not that I’m the best, but I feel like I have the ability to adapt to anyone’s style,” Styles said. “Any time I wrestled Christopher Daniels or Amazing Red, who are also high fliers, it’s fun to see what we can pull off. Guys like Sonjay Dutt I love being in the ring with, because I can be a good base for him, because I not only know how to do these moves, but also know how to take them as well. It’s just a good recipe for a good match.” 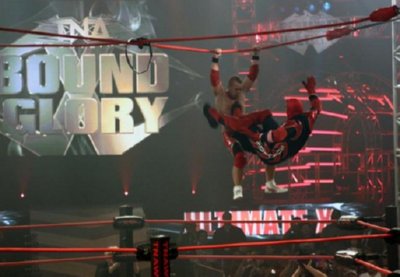 Styles has been in the ring with all athletes of all sizes, not just in TNA, but around the world. He wouldn’t have been the first TNA grand slam winner if he hadn’t. In fact, because the X-Division came without weight limits at first, a lot of the high fliers often found themselves in the ring with workers of different sizes and styles; a challenge that Sonjay Dutt was more than willing to take on.

“I just learn to adapt. I actually love the big man-little man dynamic, as it’s just a great and easy story to tell,” Dutt said.

There is no denying that both the cruiserweights and the X-Division were very exciting to watch. However, it was still the heavyweights, and in some cases, super heavyweights, that were monopolizing the top spots in the business.

That was until February 15, 2004. It was 10 years ago that Eddie Guerrero won the WWE championship from Brock Lesnar and created hope for anyone who has ever been told ‘You’re too small.’

“It was amazing. First of all, I was there. I was managing Chavo at the time, and he won the WWE Cruiserweight Title that time. I didn’t know what was going to happen, so when it happened, I was very excited; I was happy; I was emotional,” Chavo Sr. said. “He (Eddie) was not a little guy when it came to muscle, but compared to Brock Lesnar and all these guys, he was small. It was really emotional and gratifying that one of my family members had broken that stereotype and had become one of the biggest stars that they ever had in this business.”

Eddie Guerrero’s success created opportunities for future stars of the wrestling business. And nights like that are the reason why guys like Rey Mysterio, Daniel Bryan and A.J. Styles are no longer called cruiserweights; instead, they’re called champions.