In the last couple of years World Wrestling Entertainment has been starting to truly take advantage of its massive professional wrestling back catalogue. Amongst the DVD/Blu-Ray releases made available, the ones based on World Championship Wrestling material has proven to be some of the most successful in terms of sales and popularity so it should come as no surprise that WWE would go back to that well again. 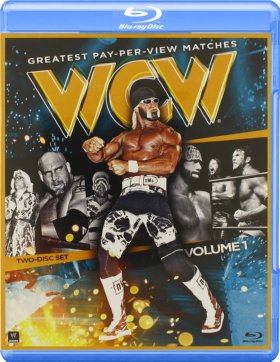 In WCW Greatest Pay-Per-View Matches Volume 1, WWE has managed to put together another strong collection that by the end will leave many yearning for not only a second volume, but also to get in a time machine and return to those halcyon days when WCW and WWE drove each other to incredible heights that have not been matched in an age. (Of course, those in the U.S. can watch all the old PPVs on the recently-launched WWE Network now.)

The collection begins with host Booker T giving the viewer a rundown on WCW and some of the various PPVs before launching into the first bout which is probably one of Ric Flair’s less seen Starrcade matches, the 1987 match against Ronnie Garvin. While WWE fans may only remember Garvin as someone who competed at the middle of the wresting card in WCW it was an entirely different story. In WCW, Garvin was a fierce competitor who had some great matches with Flair, and their Starrcade match in the steel cage certainly fits that description.

From there things jump ahead a year to 1988 for a Great American Bash match between Barry Windham and Dusty Rhodes and a Starrcade match pitting the Road Warriors versus Sting and Dusty Rhodes. The Windham/Rhodes match takes place when Windham was part of The Four Horseman and was really starting to approach the apex of his career. The psychology that both Windham and James J. Dillon utilize to enhance the match really makes for a compelling story that has the audience going nuts for most of the contest. As for the 1988 Starrcade Road Warriors versus Sting and Dusty Rhodes match, one of the most notable things is that the video is considerably sharper compared to the previous match in the collection. One of the interesting elements is that while Sting and Dusty Rhodes are meant to be the faces it is obvious that the Road Warriors were still very over with the crowd. The match itself is a good hard-hitting bout that demonstrates why so many miss this era of wrestling as it really has everything you could want.

Next is 1989, with the Chi-Town Rumble match between Ric Flair and Ricky Steamboat as possibly one of the best of all time — but unfortunately it has been included in numerous WWE DVD/Blu-Ray releases over the years. Nevertheless, there is no disputing how great this match is and it is one that is recommended viewing. The other match that year is a Halloween Havoc match with Lex Luger facing the challenge of Brian Pillman. By 1989 Lex Luger’s course towards the main event picture in WCW was set. With regards to Pillman, he was starting to truly make a name for himself, and being this match took place before many of his later career injuries, Pillman in this match has a lot more speed compared to the wrestler many may remember from the WWE Attitude Era.

Perhaps a bit surprisingly is the fact that there is only one match from 1990 which is a classic confrontation featuring Ric Flair versus Sting and one match from 1991, an intriguing match pitting Lex Luger versus Barry Windham. Both of the matches are ones from The Great American Bash PPVs, but in many ways the 1991 bout is the one that viewers may want to pay attention to. By 1991, Ric Flair had gone to the WWE and taken the WCW World Heavyweight Belt with him, so the Luger/Windham match was to crown a new champion. Throughout the match you can hear the crowd periodically chanting “We want Flair” which really helps to give some idea how tense things were in the company.

By 1992, WCW had started to push more of the spotlight onto Sting, and the Wrestlewar War Games match reflects that as the Stinger headed up a team to take on The Dangerous Alliance. From earlier in that year there is also a very fun and fast bout between Jushin Liger and Brian Pillman that marks the era when WCW started to build up its light heavyweight/cruiserweight division. There is also an intense and bloody 1993 Halloween Havoc match from the Vader and Cactus Jack feud from that year that gives a taste as to what made their rivalry one that is so fondly remembered.

As for matches provided from 1994, they include a Bash at the Beach contest between Steve Austin and Ricky Steamboat and a bit of an infamous Halloween Havoc career versus career bout featuring Hulk Hogan taking on Ric Flair. What makes the match infamous is that normally going into a match like this the heel is the champion and the challenger is the one who has had to put his career on the line in order to get the title shot. However, that’s not the case with this match. Instead Flair is the challenger with his career on the line, Hulk Hogan is the champion, the match takes place in a steel cage, and the special enforcer is Hogan’s friend Mr. T. As a result, there really isn’t any doubt as to who the winner is and in some ways it might represent the beginning of where things in WCW started to go awry. Regardless, the Flair/Hogan match is still a good quality one and worth watching.

Weirdly enough, there is absolutely no 1995 matches featured and the only 1996 match is the often seen Bash at the Beach match where the New World Order was formed. Faring much better is 1997, with the Spring Stampede match between Diamond Dallas Page and Randy Savage. The match is intense, the two competitors have excellent chemistry in the ring, and the action spills out all throughout the arena making for a wild contest. There is also the 1997 Halloween Havoc Eddie Guerrero and Rey Mysterio match and it is another classic that shows why the WCW cruiserweight division was so talked about.

The year 1998 includes another Randy Savage match from Slamboree where he faced Bret Hart. The match represents an interesting contrast in styles, though one strange element is the fact that both competitors are heels as far as the crowd is concerned. There is also the cruiserweight bout between Chris Jericho and Juventud Guerrera from the Road Wild PPV and it features some great in-ring action and character work by Jericho. Also, the 1998 Halloween Havoc World Heavyweight Match featuring Goldberg versus Diamond Dallas Page is included. For those unfamiliar with the match, it is the one where the video feed towards the end cut out because the company had ran past their allotted time and as a result had to offer a refund to people who bought the PPV. While it is understandable to want to include a Goldberg match another less seen match might have been a better choice.

In the regular collection there are no matches from 1999 and thus things skip ahead to the 2000 Bash at the Beach match pitting Jeff Jarrett against Booker T. Ironically enough it is the only match in the entire collection that features the host of the DVD/Blu-Ray collection Booker T, and while the bout is solid, during his WCW tenure there were certainly stronger contests featuring “the five-time, five-time WCW Champion.” There is also the 2000 Starrcade ladder match between 3 Count (Jamie Noble & Evan Karagias) and the Jung Dragons from that same year which quite a number of great maneuvers as each of the competitors try to win a WCW Cruiserweight title shot. The last match provided comes from the 2001 Greed PPV and features Scott Steiner versus Diamond Dallas Page. A good amount of the action takes place outside the ring and is a pretty stiff and physical contest.

While WCW Greatest Pay-Per-View Matches Volume 1 is not a perfect collection, due to the inclusion of matches featured in other WWE DVD/Blu-Ray releases, it is an incredibly strong set that shows why World Championship Wrestling was must-see television. Hopefully Volume 2 will be coming soon.