DETROIT — WWE brought TV tapings back to Joe Louis Arena on Tuesday night, as fans were treated to a live shoot of Main Event and a taping of Friday Night Smackdown.

For those who had gotten used to seeing hot crowds lately, well, this show isn’t for you. The crowd, which filled the whole lower bowl and about a third of the upper bowl, featured a lot of kids, and the crowd as a whole rarely got into anything that wasn’t Daniel Bryan related.

Between Main Event and Smackdown, Bryan made three appearances on the show, but was still garnering the biggest reaction each time out. 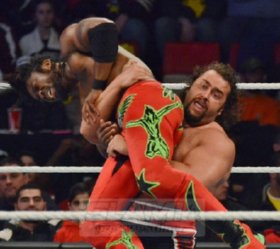 Alexander Rusev quickly dispatched of Kofi Kingston in a quick dark match to start the night in Detroit. Photo by Brad McFarlin

The show ran on a bit of a different time schedule due to the live airing of Main Event at 7 p.m. Tickets for the show said 7 p.m. for the start time, so many were late arriving when the taping went on the air. Prior to Main Event, Alexander Rusev quickly dispatched of Kofi Kingston in a quick dark match.

The live broadcast of Main Event followed, with great matches featuring Daniel Bryan beating Kane and The Usos successfully defending the WWE Tag Team Championship against Los Matadores. The Usos received one of the bigger reactions of the night for their big win here, in what definitely was a fun, action-packed face vs. face match.

Following the broadcast of Main Event, the fans were treated to an unanticipated dark match. To say the least, after the three-man team of R-Truth, Xavier Woods and Sin Cara entered, the fans were shocked (and very happily surprised) when the lights went out and the Wyatt Family declared they were here.

The match went just about as you would expect, as the Wyatts used their size and power, but the good guys used their speed to stay in it, but when it was all said and done, it was Bray Wyatt hitting R-Truth with Sister Abagail for the pinfall.

There was no post-show dark match.

Some fans were disappointed that both John Cena and Randy Orton, although neither were advertised to appear. Triple H was, however, and did not appear on the show.

Batista received a good amount of hate, but nothing like had been seen recently. There were very few chants in general on the show, other than for Daniel Bryan (which some were chanting as “Let’s Go Bryant” instead of “Daniel Bryan”), and very few signs, as well. Generally, not a very good crowd, which is unusual for Detroit. The in-ring action, for the most part, wasn’t blow-away by any means, but it was really solid from top-to-bottom and the wrestlers deserved better.

WWE returns to Detroit on Friday, June 6 for a house show.