In a sport where cutting an intense interview or trying a cool catch phrase is paramount, Louis Long won’t do it. He might even seem like he is ignoring the fans. The focus he displays in the ring is laser-like, blocking out all noise. Why does Louis Long act this way? It is because he is deaf.

The 37-year-old Long, known in wrestling as The Silent Warrior, has been deaf since birth. He became infatuated with the sport of wrestling as a child watching the WWF on television. “I loved Hulk Hogan and Andre the Giant,” said Long. “I looked up to them and I think they are true heroes.”

Louis grew up as many other kids did in Buffalo, New York, playing soccer, basketball and participating in track and field. Still he was drawn to wrestling. “My brother and I loved wrestling in the backyard,” recalled Long. He was determined to be around wrestling. “I first got involved in professional wrestling as a ringside photographer.”

In January 2010, Long began his training with Empire State Wrestling. It was there that he was taught by Brandon Thurston, Pepper Parks and Blackjack Phoenix. His trainer, Parks, has been impressed with Long’s attitude: “I respect how much Louis loves pro wrestling and how hard he works and promotes himself.”

“I am strong hearted,” implored Long. “I wanted to prove to them all that a deaf individual could do it (wrestling) as well.”

There have been a few deaf wrestlers in the history of wrestling. David “Silento” Rodriguez was of Latino background from Monterrery, California, and rose to be a high mid-card wrestler in Texas. Alan Kilby, a deaf-mute from England, was a successful mid- and light-heavyweight in the 1960s. “Silent” George Hubert started wrestling in the 1950s and kept going on and off for another 40 years. Harry Kendall and Colin Williamson were another couple of Brits who were deaf. Fans of Maple Leaf Wrestling in the early 1980s remember Silent Brian Mackney getting bounced around.

Sometimes, Long has been plagued by negative people who doubt that he can succeed in the sport. “I never see myself as disabled because I can do anything, except I can’t hear. I don’t need ears to wrestle.” In fact he feels that he can give greater concentration to a match because he does not have background noise to distract him.

Some might be wondering how Long, as The Silent Warrior, communicates with his opponent in the ring. “I use eye contact, expressions on the face to tip off what will happen next,” explained Long. Prior to the match he would meet with his opponent and use American Sign Language (if his opponent is deaf) or write his ideas and thoughts on a notepad in order to communicate. Since wrestlers are very dramatic, Long uses those cues to react during the match.

On his right arm The Silent Warrior has a tattoo of his wrestling mask. “I was fascinated with The Destroyer growing up,” said Long. “He inspired me and was one of the first American masked wrestlers to work in Japan and now I am the first masked U.S. deaf wrestler to work in Japan.”

“My oldest boy and I watched him wrestle in Japan,” remembered the Sensational, Intelligent Destroyer Dick Beyer. “I said to Louis, ‘Your body is your gimmick.’ He had a mask but Louis had something I didn’t and that is being a deaf wrestler.”

Dick Beyer is certainly proud that Louis has been making a name for himself internationally and has great respect for the Silent Warrior. “I thought he was terrific,” said Beyer. “He has come over to my house for advice about working in Japan. He even brought other deaf wrestlers to the Cauliflower Alley Club Reunion and the CAC provided them with an interpreter.” 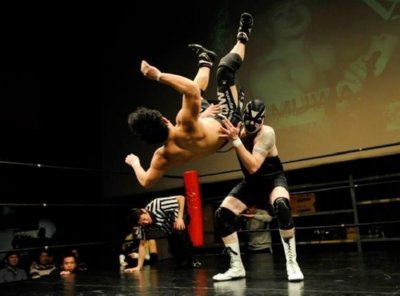 His introduction to wrestling internationally started in 2011 in Tokyo, Japan. Long wrestled for Touroumon Japan Pro Wrestling and in his debut on November 26, 2011, he defeated Sawaterio. Since then he has returned to Japan, wrestled in the Philippines and Canada, as well as throughout the USA. 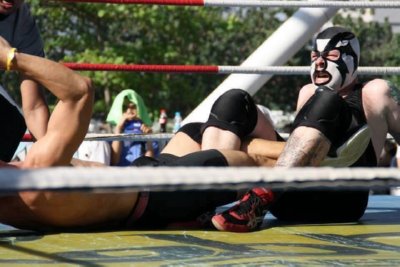 The Silent Warrior traps a Filipino grappler in a figure four leglock during a tour of the Philippines.

A cook for the Buffalo Sabres organization, Long has been enjoying the sizzle of professional wrestling. “This gets me excited!” exclaimed Long. “So many people have said, ‘Oh, he can’t do it.’ I just can’t hear. I will be a great wrestler.”