Mat Matters: Young vs old Doctor Who debate can learn from pro wrestling

The Los Angeles Times reported that two genres of shows trended as the most talked about in the Twittersphere in the third last week of December 2013: pro wrestling and Doctor Who.

More than Nielsen ratings, twitter comments reflect the Zeitgeist of younger viewers, who watch their shows online or via services like Netflix. 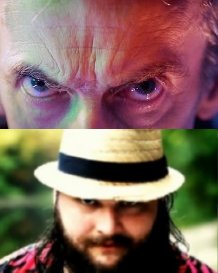 WWE Wrestling was the Twitter Champion, with its flagship Monday Night Raw show making the top of this list, while two of its other shows made #7 and #8. Not a purely WWE phenomena, pro wrestling rounded out the top 10 with Spike TV’s IMPACT! Wrestling show making #10.

The only other genre that had more than one appearance on this list was sci-fi, specifically “Doctor Who.” Number two on the list was “The Time of The Doctor,” the final appearance of Matt Smith as The Doctor, and the brief introduction of his successor, Oscar-winner Peter Capaldi. According to the LA Times article, “Doctor Who” hit the list again at #5, with a tribute show to Matt Smith’s tenure as the ever-reincarnating/regenerating Time Lord.

While the audiences for pro wrestling and Doctor Who are radically different from one another, there are some who count themselves fans of both. In face-to-face conversations and email exchanges with this reporter in the past, Paul Heyman has revealed himself to be a fan of Doctor Who at some points in his life. And so has former ECW/WCW/WWE wrestler Stevie Richards.

Both pro wrestling and Doctor Who have also gone through major upheavals in their history. Most recently with Doctor Who, there have been tensions amongst fans with the younger Matt Smith relinquishing his spot to the much older Peter Capaldi.

Some news reports, such as this article in the Daily Mirror, cite social media and interviews with teenage fans of Doctor Who who are upset with an older actor taking over the role (despite the classic series featuring mainly older actors, up to when it was cancelled in 1989). Showrunner Steven Moffat is clearly on the defensive against angry teenage girls at his choice of an older Doctor.

However, Moffat and the BBC could look at the world of televised pro wrestling as a case-study: agents, bookers, and wrestling critics/fans have dealt with storylines where older wrestlers have taken away the “top spot” from younger wrestlers. In most cases, this has not led to a ratings collapse.

For example, Ric Flair has become champion numerous times, defeating wrestlers many years his junior. The NWA World champion was often a veteran — and looked it. Besides the six-time champion Lou Thesz, who exuded class, Gene Kiniski was a crusty veteran when he won the belt in 1966, and Dory Funk Jr., with his follicly-challenged head, looked far older than he was. And no one messed with Harley Race, because his years of experience was etched on his face and inked in his tattoos. 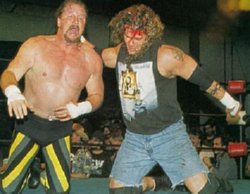 Terry Funk and Raven go at it.

In more recent times, let us not forget when Paul Heyman surprised everyone by booking another Funk, Terry, to defeat Raven, who is 20 years his junior, for the championship at ECW’s fantastic Barely Legal PPV in 1997. In the 2000s, when The Rock was the most electrifying man in sports entertainment, a wrinkled Hollywood Hulk Hogan won the hearts of the fans in Wrestlemania in Toronto when they faced each other — and Hollywood was playing a heel. He might have lost the match, but it seemed to be a passing of the torch from a young star to an older star by the time the match was over: Hollywood’s brand overtook The Rock’s. Older was not necessary a step back. One might even say that The Rock regenerated into Hollywood Hulk Hogan by the time that match was over: the younger star was out-electrified, and the younger audiences stayed with the show.

Like Hogan to The Rock, passing the torch to the next Doctor is a tradition on Doctor Who.

Capaldi’s tenure as the Time Lord could be just as successful as Flair’s and Hogan’s late-runs as the top stars of wrestling, if handled correctly by Moffat. In America, the popular “Hot Topic” stores (which cater to a teenage market that neither the WWE nor IMPACT! seem to have any presence) in Florida have been selling out of “Doctor Who” t-shirts and other merchandise, featuring the faces of the younger Doctor actors like Smith and David Tennant. The BBC could brand its new Capaldi t-shirts without his older face, but perhaps with his already over catchphrase: “I’ve got new kidneys! I don’t like the colour.” Or maybe the shirts can show the close-up shot of his eyes, which don’t show Capaldi’s wrinkled face, but reveal a piercing gaze that is almost Kevin Sullivan or Bray Wyatt-like. 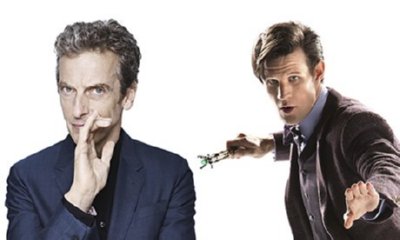 In December 2014, let us see if Capaldi’s Doctor Who Christmas Special makes the top 10 ratings on the Twittersphere, despite having an older face.