Tiger Joe Marsh: From the ring to On the Waterfront

With the Academy Award nominations just released, it is a good opportunity to look back on a pro wrestler turned actor who never won an Oscar, but was in a couple of Oscar-winning movies, like On the Waterfront, and award-winning stage productions, like Guys and Dolls. 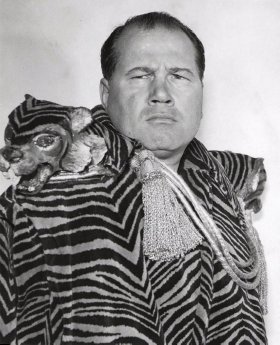 Chances are you’ve seen him, as his film resume is pretty long, running from 1949’s Pinky to The Cat from Outer Space in 1978, plus TV spots, like Simon & Simon and CHiPs.

He was born Joseph Samuel Marusich to parents of Yugoslavian descent August 25, 1911 in South Chicago, and grew up in the Windy City, living around 24th Street and Wentworth Avenue. When he reached the seventh grade, he quit St. Jerome’s Grammar School, and began working as an errand boy at a shoe store.

The legendary Los Angeles Times sports columnist Jim Murray wrote about Tiger Joe in 1965, more than a little tongue in cheek. “He once sold newspapers to Al Capone and watched Frank Nitti’s (or Johnny Torrio’s) car for him — a wicker-trimmed Pierce-Arrow with bullet holes in it. He got into wrestling because he couldn’t see that his father — who had traded Croatia’s rocks for Gary, Indiana’s ingots of hot steel — had improved himself any in the land of golden opportunity.”

At a gym located on 31st Street between Princeton and Wentworth Avenues, Marusich learned wrestling, and was introduced to the pro game by Steve Savage.

Dropping Marusich in favour of Marsh, was a natural. The “Tiger” nickname came from his ring gear, which became more elaborate over the years, thanks to his Hollywood connections.

“Ralph Alswang, Broadway costume and set designer, has created a $1,000 Tiger Skin Robe for Tiger to wear as he enters the ring,” reads a story in the May 1953 edition of NWA Official Wrestling. “The robe, complete with Tiger head epaulettes, has become a trademark known to all sporting fans throughout the world.”

“He stood over six feet tall and weighed 262 pounds,” Anthony Marusich told the Chicago Tribune upon Tiger Joe’s death in May 1989. “He was ferocious in the ring, but outside of it he was gentle and very tender. He was very easygoing and everybody liked him. He had no children of his own, but was very fond of little kids. He was just a very gregarious person.”

Tiger Joe Marsh was a villain, warned the Hartford Courant in November 1939, as he was “as unethical and rough a wrestler as have ever appeared in Hartford.”

On the WrestlingClassics.com newsboard, Lou Thesz was asked about the big baddie. “Tiger Joe Marsh was a Chicago boy and ended up in the movie industry,” wrote Thesz. “I really liked him and he trained with Ad Santel and myself a few times. He was not really champion material.”

Therein is one of the last great mysteries for professional wrestling historians.

Marsh always maintained that he was world champion for a time in 1937.

“In his PR sheet he was listed a former world champion wrestling winning the title in 1937,” said historian Tom Burke. “There is the story that he was wrestling in Lawrence, Mass against Paul Bowser’s champion, Danno O’Mahoney and the ref slipped up and counted too fast and Joe won. Rumor or fact an interesting tid bit.”

Murray, never one to get in the way of a colourful story, reported it as well in his profile of Marsh:

He won the “Heavyweight wrestling championship of the world” (which made him one of a select group of 20 or so at the time) in 1937 when a referee got his signals crossed in Lawrence, Mass., and awarded him the title over the Irishman, Danno O’Mahoney. In Irish-heavy Massachusetts this was as big a mistake as voting Republican, and Tiger Joe had to write a letter to the booking agent explaining it was no fault of his. He held the “title” only for a week.

“With Dan Anderson’s finding of the mysterious first Fred Beell-Robert Friedrich match, the Marsh mystery seems to be one of the few remaining ones in my feeble mind, along with Farmer Burns in the 1880s,” said historian Don Luce.

Regardless of the truth, the fact is that Marsh’s career would go in a decidedly different direction, following his four years in the service, partly stationed at Florida’s Gainesville Naval Station, during the Second World War.

A chance meeting with director Elia Kazan led to his first film role, performing as a courtroom bailiff in Pinky, which Kazan directed and starred Jeanne Crain. Kazan would also use the part-time wrestler in Panic In The Streets, with Richard Widmark and Paul Douglas — he has a great streetfight scene with Jack Palance — and in Viva Zapata! where he was a revolutionary. 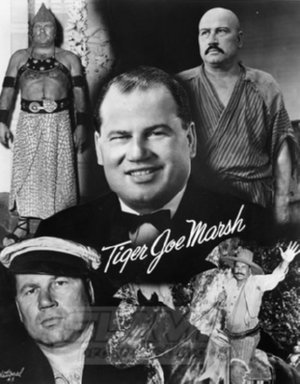 Marsh is probably best remembered for his role as the corrupt union’s muscle man in On the Waterfront, the story of a prize fighter who tries to get out of his messed up life on the docks. Kazan’s movie won eight Oscars, including Best Actor for star Marlon Brando.

“In the course of his dual career, Joe has made invaluable contacts and friends in all phases of show business, sports, and the social set,” reads the NWA Official Wrestling article. “Not bad for a kid who spent his early youth acquiring bruises and black eyes.”

When he was penning a look at professional wrestling in March 1957, The New York Times‘ Gay Talese turned to Marsh for a quote about the fans:

Other critics maintain that wrestling merely pleases the “blood-thirsty” customer, which is what certain customers have been since the days of the Roman arena. Tiger Joe Marsh, a wrestler-turned-actor, compares wrestling fans to the bullfight fans “who see blood and then yell, ‘Ole! Ole! Ole!'” But Tiger says that certain of the blood-thirsty clientele also buy horror comic books, watch gangster movies and gruesome television shows.

A November 1954 article in Wrestling U.S.A. profiled Marsh as well, just as he was cast as a Lybian guard in The Egyptian. “And if the schedule gets jammed, the Tiger will enlist his brother Tony to help out on the movie front. He landed Tony a part in On The Waterfront — so it looks as if the Marsh family might someday rival the Barrymores,” reads the article.

Tiger Joe Marsh was able to play more than just thugs, though.

He was a part of a touring cast of Guys and Dolls, as big Julie, and toured as well as, appropriately, the wrestler police chief in The Teahouse of the August Moon.

By the mid-1980s, Marsh had returned home to Chicago. When he died May 9, 1989 at Michael Reese Hospital in Chicago, his brother Anthony was the last surviving member of the family.