The old adage is that you can take the dog out of the fight, but you can’t take the fight out of the dog. Perhaps this mantra could suit Jim Cornette these days. Through his mostly self-imposed exile from the world of professional wrestling, Cornette has seemingly learned to let things roll off his shoulder a bit easier these days. However, in the newest Kayfabe Commentaries release, Breaking Kayfabe with Jim Cornette, Cornette is still at his outspoken best despite a more removed tone for his own sake. 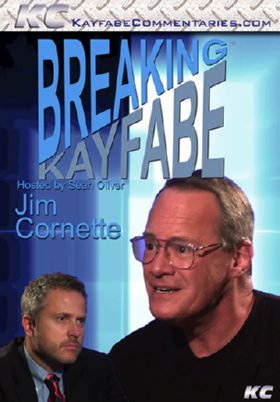 Numerous topics come about during this interview with Kayfabe Commentaries interviewer Sean Oliver, but most of it is focused on the career of Cornette after the turn of the millennium. The subject that kicks off the discussion and provides some of the most dramatic tension in the interview is the discussion of the rift between Kayfabe Commentaries and Cornette. Both sides attempt to speak out what they felt lead to the end of the business relationship, with it mostly centering on Vince Russo. Here, Cornette is at his best, demonstrating his straightforward attitude while it seems Oliver is more reserved from the business side of things. The tone definitively paves over the rocky road the counterparts were once on and sets the path for the rest of the discussion.

As Russo’s name was brought up, it naturally lead to Cornette discussing his time with TNA. The description of the chaotic work environment as the Jarrett regime switched over to the Carters is painted by Cornette. The mouthy manager remained as one of the few Jarrett era mainstays after Jarrett himself and Dutch Mantel were ousted as Russo took over writing for the company. As always, Cornette’s demeanour adds an intrigue to the stories here, where you can see and hear the stress and anger in his passionate, vigorous tales.

Given the state of TNA through screen presentation and backstage rumour, the TNA stories didn’t fascinate as much as Cornette discussing his time as head booker in Ring of Honor. Where as Cornette felt doomed to failure because of his association with Russo in TNA, ROH acted as a new slate for Cornette to leave his mark on. This was not to be, as ROH was marred by technical difficulties and, according to Cornette, management issues. In this section, Cornette is clearly still letting the wounds heal over as it was his last job in the wrestling industry. Because of this, you can still flashes of the “old” Cornette, where he isn’t afraid to hold back on the names that wronged him and the problems that plagued him. The ROH discussion is a classic Cornette tale that, for better or for worse, demonstrates why he is possibly the most interesting shoot interviewee in pro wrestling.

My personal favourite part of the interview comes as it winds down and Cornette discusses his rehabilitation from the wrestling industry and where he is today. Discussion about acceptance of his place in wrestling today and his life as it stands now show the depth of the complex man, where he delivers small riffs on his philosophy on life, politics, entertainment, and everything that he enjoys today.

For shoot interview fans, this isn’t necessarily the old Cornette. A man once incoherently angry, while entertaining itself, is no longer there. Here is a more calculated, yet still equally passionate Cornette that can still spin the yarn like no other. The interview comes full circle in a way, as it unravels and reels in the angry Cornette to display a man who has finally had an epiphany about where wrestling falls in his life. Whether or not you like or dislike or agree or disagree, Jim Cornette is one of the most entertaining speakers the business of professional wrestling has ever had and this interview gives you yet another glimpse at that.