WWE in Montreal all about Cena

MONTREAL – WWE’s matinee show on Sunday at the Bell Centre is not one people will remember a decade from now. But for the fans attending, especially a good number of kids due to the 5 p.m. start, it doesn’t really matter because it was all about one guy: John Cena.

It was Cena’s big return to Montreal as he was not in town for the last house show in September 2013. His last presence was at Raw in September 2012, where he delivered such a memorable promo at the end of the show.

On Sunday, the crowd wasn’t the biggest. Actually, the final number will probably be about what WWE usually draws (unless there were more complimentary tickets than usual), but at the same time the lowest for a Montreal show in eight years. 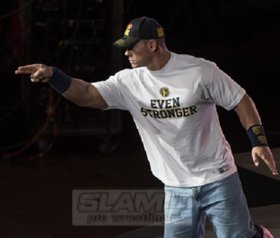 Even if it wasn’t a capacity crowd, you wouldn’t have known it when the first notes of Cena’s music hit the speakers — it was that loud. To me, the surprise was that Cena was the last one to enter the ring and the last one to be announced, something usually reserved for the champ. So much for Randy Orton as the Unified champion.

Then again, no one can deny that the star of the show was Cena. Like it or not, Cena is that polarizing guy, in the sense kids and women love him and scream for him and on the flip side, by and large men and people with some wrestling knowledge hate him and heckle him. One way or the other, he generates a reaction nowhere near what others can do.

The match was a good one, mostly because of the false finishes at the end. When Orton kicked out of an Attitude Adjustment and Cena got out of an RKO, the crowd went totally wild. It is such an unfortunate thing that they chose to end the match with Orton being disqualified for a low blow. It was like if a huge cold shower had hit the Bell Centre. Of course, they sent people home on a happy note with Cena getting even with Orton after the match, but they had such a great momentum at the end of the match that a clean win by Orton would have worked better; at the very least, a pin involving some kind of cheating.

The weird thing when you think about it is that it was clear Cena was going to be the star and granting it was his return after 16 months, he was nowhere to be found locally in the media. Nothing against Cody Rhodes, Antonio Cesaro, Kane, and Sin Cara, who were all made available for interviews in the weeks prior to the show, but a good interview with Cena in the biggest newspaper in Montreal, let’s say just before Christmastime, would have helped greatly.

Montreal is a big event kind of city. If the fans don’t feel like it’s an important show, they may not show up. With Cena not being advertised through the roof and with several other superstars like CM Punk, Daniel Bryan (or Wyatt) and The Shield booked on another house show, the feel of a big show wasn’t there at all. That being said, a live event will always have the edge on a regular house show. To make matters even worse, a big ice storm hit the province the day before and perhaps prevented WWE from what could have been a better walk-up crowd.

The last time Montreal received the visit of Monday Night Raw, in September 2012, it was the night Bret Hart came back in town and the night Jerry Lawler had his heart attack. Since then, fans can’t wait to welcome “The King” back in Montreal.

With the last two house shows combined drawing as many fans as Raw drew in September 2012, it would be a good idea for WWE to come back with a big show in what has been, and still is to a certain degree, a good market for them.