BUFFALO, NY – The WWE entered the First Niagara Centre in Buffalo on Saturday night with a show that featured the tag team division in full force. The event was far from a sell-out, but the crowd was eager and ready for action.

The Prime Time Players defeated Rybaxel in a 20 minute match that warmed up the crowd with exciting double teaming and fan interaction. Curtis Axel showed a smooth repertoire of moves and spent the majority of the match in the ring with Darren Young. The Bella Twins pinned Aksana and Alicia Fox in a quick paced and fun 10-minute match. 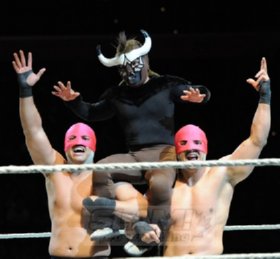 When the Real Americans came to the ring they were met with a mixed and vocal reaction from the fans. Zeb Coulter, the teams’ manager, complained that Sin Cara was an illegal immigrant and needed to get out of the country. They faced the WWE tag team champions Cody Rhodes and Goldust. The fans rallied behind the champions with chants of “Rhodes” and “Goldust” when the brothers were in a pinch. The Rhodes brothers retained their titles after 20 minutes of action.

The final tag match of the night featured Los Matadores and El Torito against the Three Man Band. The fans loved the physical comedy of this match as Heath Slater ran at his own jacket as one of the Matadores held it and yelled “Ole” when Slater missed his target. Jinder Mahal proved that he is an exceptional talent as he took an aerial assault from El Torito that got the crowd to their feet with a thunderous ovation. The 12-minute match ended with a predictable loss for the 3MB.

The tag team action was excellent and proved that the WWE is making a significant effort to reignite that division. In each tag match the heels effectively isolated one of their opponents, working them over in the corner. The battered opponent would struggle to get to his partner only to be pulled back to the opposite side of the ring. The crowd really reacted with sympathy and shouts of encouragement for the battered good guy and indignation towards the evil doers. The quality of the tag team matches had even the most jaded of fans reacting in a positive way. 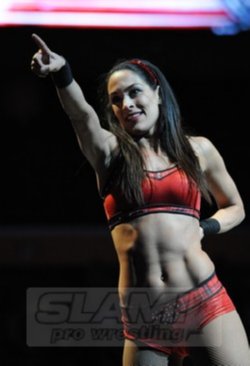 The show also saw Albert Del Rio defeat Sin Cara in 14 minutes with an arm bar. Kane took down Zack Ryder in a quick match. After the match Kane issued an open challenge which was accepted by the Big Show. One minute into the match Big Show knocked out Kane.

If there is any doubt about John Cena’s popularity, then last night proved that he is the hero to the children of Buffalo. When Cena entered the ring for the main event against Randy Orton the fans exploded in euphoria for the never say quit superstar. The champion, Orton, was lustfully booed by the pro-Cena crowd.

The match was a see-saw affair that saw Orton mock the crowd with Cena’s “You can’t see me” hand gesture. Cena kicked out of multiple pin attempts and when it appeared he was rallying towards a championship win Orton hit him with a low blow. This violation resulted in Orton’s disqualification from the match and he was able to retain his title.

The matches were well received and without the time restraints of television the wrestlers were able to bring their craft to life. It was a wonderful evening of WWE action from Buffalo. The WWE superstars also took time to sign autographs or have photos taken with ring side fans on the way back to the locker room. A great evening of wrestling!