By BILL FERNOW – For SlamWrestling.net

David Shoemaker, author of The Squared Circle: Life, Death and Professional Wrestling, has long toiled under the patronage of the Gawker Media Empire, one of the bigger internet media outfits around, as writer of the Dead Wrestler Of The Week column on Deadspin, and a Grantland regular.

Something that sets Shoemaker apart from the rest of the troupe is that he chose to write his column under a hood, at least figuratively, using the name “The Masked Man,” whose spare biography simply states: “The Masked Man works in publishing.” 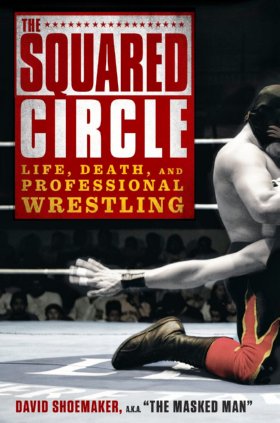 If you wonder whether writing about wrestling under a gimmicked name means Shoemaker is just as deranged as the rest of us wrestling fans, the dedication in his book (To Mom and Dad, who never made me turn the channel when this junk was on) confirms it. How would any of us have blossomed into such upstanding marks if not for the forbearance of those who raised us?

Another gimmick for Shoemaker might be “The Wordsmith,” but in the babyface sense. He can write.

His sheer enjoyment of wrestling is apparent, and it emerges from the page. Authors of wrestling books often take a tone with the reader, falling somewhere between outright ridicule and pseudo-intellectual pedanticism (Shoemaker is forgiven for quoting Barthes, which has become a sort of trope among the intelligentsia when they write about wrestling). Shoemaker leaves himself room for a little tongue-in-cheek (and uses it), and his is a voice of enthusiasm, refreshing when compared to the base disinterest of those who ploddingly churn out material about wrestling simply to make a buck.

Shoemaker divides his book into four parts, by era (Golden, Territorial, WrestleMania and Modern) containing chapters that are each devoted to a dead wrestler. These chapters are, for the most part, re-writes of many of his previous “Dead Wrestler of the Week” columns, available online. For free. There is material in the book that isn’t available on Deadspin, but much of it is, which makes the book feel a little bit like a rehash at points.

In “The Golden Era,” Shoemaker briefly covers pro wrestling’s beginnings as a spectacle at the start of the 20th century up to about World War I, during which time, dirty fighter (and Iowan) Frank Gotch became a celebrity. Promoters grew the business after they smartened up to harnessing what made wrestling a hit at carnivals. Shoemaker curates the material deftly, which likely prevents most readers from skipping ahead. It’s unlikely that there’s anything here most readers of SLAM! Wrestling haven’t already read. This is a book for the softcore wrestling fan. That’s not necessarily a bad thing.

“The Territorial Era,” according to Shoemaker, begins in post-World War II America, in the age of television. Gorgeous George is the star, and the machinations of the NWA and the resulting promotional offshoots are laid out succinctly. A broad swath of wrestling’s deceased superstars have their bios presented here, including a cool write-up about “The Chiefs: Wahoo McDaniel and Jay Strongbow,” which compares and contrasts Wahoo, the hard-hitting, hard-nosed old footballer, and Strongbow, the Italian guy masquerading as a Native American, two wrestlers who seem to exist in parallel universes.

Shoemaker writes about Vince McMahon’s hostile takeover of wrestling in “The Wrestlemania Era,” and “The Modern Era” gives us the biographies of wrestlers whose stars shone on Monday Night RAW. A double chapter devoted to Chris Benoit and Eddie Guerrero is very well done, with Shoemaker recounting their careers and friendship, and their similarities. Both were extremely talented, but, as Shoemaker notes, weren’t perceived as superstars. Both achieved that status to become legends, at great cost to themselves and their families, obviously and horribly so in the case of Benoit.

Shoemaker includes his facile analysis of wrestling’s broader cultural significance in terms of race in “Race In Wrestling,” a section that doesn’t shy away from wrestling’s shameful past, and present (Cryme Tyme, anyone?)

As you read the book, moving from one chapter to the next, there is a sense of redundancy as the wrestlers’ careers often overlapped, so that the same events are described again. This is an obvious by-product of Shoemaker re-using the columns he wrote at different times for the chapters of the book. While it isn’t maddening by any means, it contributes to the feeling that the book was more assembled than written.Shoemaker’s approach isn’t that of an historian but more as cultural analyst and commentator. No doubt wrestling historians could find gaps in certain areas of the book, but that would be missing the point. Shoemaker’s intent is not to detail every (alleged) happening in professional wrestling, but rather to give the reader a tour through the world of wrestling, using the lives of dead wrestlers to help us translate its meaning to fans and non-fans (or, those who feign ignorance about pro wrestling).

BILL FERNOW is based in Minneapolis, and given the weather there, sitting inside to read and do a book review is a good thing.