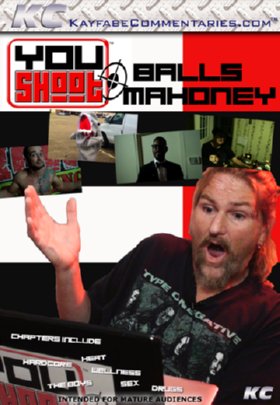 Kayfabe Commentaries’ latest video, You Shoot: Balls Mahoney, touches on many of the important milestones in Mahoney’s wrestling career. This video runs for 108 minutes and it is certainly entertaining and honest. Mahoney answered the questions offered by host Sean Oliver and emails from fans with a great thought and care.

The interview was split into sections that dealt with important aspects of Balls Mahoney’s career, such as his early years, heat, sex, drugs, wellness and hardcore wrestling. An interesting piece of information from his early days as a wrestling fan is his relationship with Chris Candido. The two were childhood chums and he attended his first wrestling matches with Chris. Their careers intertwined one another’s and it was evident that he still cares for and misses his friend who passed away in 2005. In fact they started their own backyard wrestling group when they were teenagers.

Mahoney recognized that many of his mistakes in the business have come from his bad temper. He looked back on these situations with a sober eye and admitted his mistakes and has taken the time to apologize to those he may have hurt. Among those that experienced his wrath were “Hacksaw” Jim Duggan, Vince Russo, New Jack, and the Big Show. He even had a funny and accidental altercation with Vince McMahon. At one point Mahoney even challenged the Big Show to a fight at The Monster Factory wrestling school.

When asked about alcohol and drugs, Mahoney did not shy away from the topic. He openly admitted to alcohol infused altercations that could have ended his wrestling career. In fact in one instance it is the Sandman who was the voice of reason with the police officers and spared Mahoney time in jail.

On the drug side of things you saw a man who was honest about his demons. He respects wrestlers who can get themselves clean from drugs and alcohol and revealed that he only has a drink every month or two now. His drug use is of greater concern as Mahoney admitted that he can still go on drug benders, but not often.

When asked about his attempted suicide after Extreme Championship Wrestling folded in 2001, he nervously and carefully described his journey into darkness. In Puerto Rico he attempted to end his life when his girlfriend left him, his job with ECW was gone and he hit rock bottom. Mahoney painted a depressing picture of his life at the time and is very thankful that he survived.

While the interview is clear and coherent, it rarely took a linear approach to his career. Feuds and angles between Mahoney and the Dudley’s or New Jack are quickly glossed over. It would have been interesting to delve deeper into the creation of the Balls Mahoney character or even his Xanta Klaus character during his first WWE run. Very little is mentioned about his on-screen interaction with Kelly Kelly when he was on the WWE brand ECW.

Balls Mahoney came off as an honest and emotional person who enjoys his family and wrestling. Over all the video was fun and had many interesting stories that shed light on the man during his time in the ring. At the end, Mahoney simply asked that he be remembered as a guy who could have a good match. This video, You Shoot: Balls Mahoney, is a fun watch that can take you on an emotional ride.