When this writer first interviewed Chris Hero for SLAM! Wrestling back in 2006, what struck me more than what he said was his attitude. Positive, humble (yet still confident in his abilities), and with a strong yearning to learn and improve his game, Hero was, simply, more upbeat about wrestling than almost anyone I’d ever met. I’m glad to see that, seven years later, even after experiencing a career setback, Hero’s positivity still shines through.

“Maybe it would have been (disastrous) for some people,” he said about his recent release from WWE, where he performed on the developmental NXT brand as Kassius Ohno, based out of Orlando, Florida. “I don’t know, maybe because I learned so much during my time there, I grew so much as a person and as a performer, I’ve got nothing (negative to say). I didn’t end up where I thought I would, or where I hoped I would. But I’m still doing all right.” 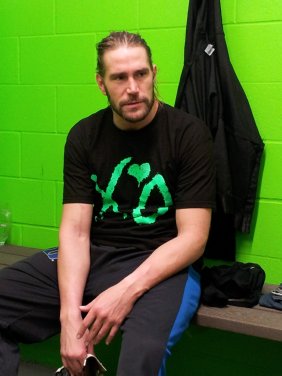 Chris Hero during a recent show for Smash Wrestling in Toronto. Photo by Mike Mastrandrea

The release actually has let Hero (Chris Spradlin) get back to his roots, so to speak, as he now has the opportunity to take bookings for various independent shows, including the Smash Wrestling show, which took place in Mississauga, Ontario, in mid-December, where he defeated Lance Storm, and where this interview was conducted (he returns to the promotion on January 26, 2014 to face A.J. Styles).

In addition to Smash Wrestling, Hero has recently returned to Combat Zone Wrestling, Pro Wrestling Guerilla, and on January 4, will be returning to Ring of Honor.

“Yeah, it’s fun to do all these shows again. Florida’s awesome, but I wasn’t able to travel as much or see my friends. So now I’m back on that. Every trip I’ve done so far, I’ve been able to come a day early or stay a day late, and visit with people.”

His old Ring of Honor tag team partner, Antonio Cesaro, recently told SLAM! Wrestling’s Pat Laprade that he’s pull for Hero. “I had the chance to talk to him and Chris is a very optimistic guy and he’s going to keep himself busy,” said Cesaro, who worked under his real name of Claudio Castagnoli before his WWE run. “He’s already started wrestling in a lot of places. He will keep doing what he loves, he will pick himself up like he always did and continue to wrestle.”

“Sure, it’s different,” he said, about having to adjust from the WWE style of shows. “Different locker rooms, different people. And because I’ve changed so much of what I did, I’ve been having to remember what it was that I did before. It’s just a matter of refreshing my memory — oh yeah, I used to do this. Also remembering how the crowd reacts, and doing a lot more individual banter with them, and stuff. It’s not like getting back in the saddle entirely, but it is adjusting the saddle to what works and what doesn’t.”

“(WWE) has a very specific style of how they want you to portray things because there it’s always about the big picture — yes, it’s about for the people in the crowd, but it’s also for the millions of people behind the camera. Now, it’s a lot more bare-bones, you’re working more for the fans in attendance, the people are right there and have immediate responses. So it’s a lot of getting used to being back in that environment.”

It also allows Hero the chance to mingle with the fans before and after the show, taking pictures and selling merchandise.

“I love the chance to interact with the fans, like doing signings and pictures after the show, because that’s me. They all came because they, for one reason or another, like wrestling and to have fun, and that’s me too. It’s changed a little bit over the years. But some fans are just a little shy, and you can kind of see it. It’s always fun to meet with them and try to open them up and see if they had a good time, instead of them being afraid to say hi.”

But as much as fans at these shows have given him (pardon the pun) a hero’s welcome, it is bittersweet as many would like to see him perform on an international stage in WWE. Hero would as well, naturally, but realizes that sometimes things don’t always happen the way you’d want them to.

“On the grand scheme of things,” he considered, “the tragedy of me getting fired ranks pretty low on the tragedy scale. It’s not like I destroyed my leg and I had to go through a year of rehab or I couldn’t wrestle any more for some reason or a family member passed away. I just got fired. I lost some job security, I lost a paycheque.”

Online rumours suggested that Hero had been in the doghouse for some time before his release, ostensibly because of his physique. While he did confirm that his physical look was an issue, he refuted that as being the reason for his firing.

“Some people thought that was why I was fired, but no. The rumours were four or five months behind. At the first of the year, they said they wanted me to tighten up. I understand. I’d had a couple of injuries — I don’t want to blame the injuries, but they kind of messed my head up, and I wasn’t necessarily in the right head-space. I was working hard, but not necessarily in all the right areas. So I had put on a little weight, and when I gain weight, I put it on right around (my midsection), so there was some discussion about that. I was off shows for a while, yes, but by those time the rumours came out on the internet, I was already back on the road. And by the time I was finishing up at NXT, I was in the best shape I’d ever been in.”

“I think there were some people that for one reason or another didn’t ‘get’ me. What I mean by that is that some people love me, and some people don’t understand why some people love me. And that’s been the story through my whole career. I remember when I was with (CM) Punk and (Colt) Cabana in Ring of Honor, some people would say, ‘I don’t get it. What’s with this guy? I don’t see why he’s so special.’ But some people loved me. And I think that translated there, to the point that they said, ‘We don’t really see a future… the way it is right now.’ There was respect there for my talent and ability, but there just wasn’t something there they were looking for.”

Though that doesn’t mean there won’t necessarily be at some point in the future.

“Absolutely,” Hero said about whether the door was open for a potential return. “In my exit interview, they said we would take a little while and revisit later on and see if things change. (Triple H) himself told me that he’d give me another shot and look at me later on. And also, like, ‘You have a good attitude, you work hard,’ that kind of stuff.”

With the mention of Triple H, the question had to be asked about a particular moment in one of Hero’s recent matches — where he kicked out of a Pedigree delivered by his opponent Johnny Gargano. Some have said this was a symbolic F.U. to Triple H or possibly the WWE as a whole. But Hero is quick to dismiss the thought.

“It was not a dig at Triple H,” he said firmly. “I have no problem with Triple H at all — he always had time for me, and to talk with me. The metaphor is that me getting fired was me getting Pedigree’d. Me kicking out was me coming back from getting fired. People are reading into that more than it was.”

Indeed, Hero would prefer that his fans don’t dwell on the negative, but instead focus on the positive, as he has done.

“Sure, the chances of me main-eventing at WrestleMania 30 are looking a little bleak,” he laughed. “But I still want to be the main event at a WrestleMania.”

“What’s important for me now is that I don’t feel like I’m doing this alone. It’s important that everybody support me positively. I understand that some people are mad and upset, but that doesn’t get anybody anywhere. If they support me and we build something new together, we can all enjoy it. And who knows what will happen?”