This week WWE Monday Night Raw goes “Old School,” bringing back some of the legends who helped make this company the powerhouse it is today. WWE Hall of Famer “The Million Dollar Man” Ted DiBiase will be one of those legends in attendance tonight and spoke about what to expect for this week’s episode.

Anytime the WWE brings back legends, you know the show has potential to be one of the more memorable events of the year. Even though Ted DiBiase doesn’t know all of the old school wrestlers who will be making an appearance, the group he does know is very impressive. 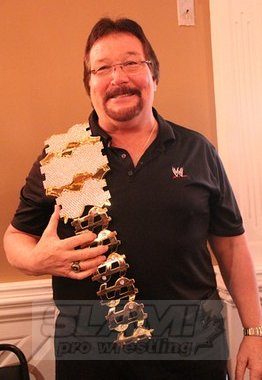 Ted DiBiase and his Million Dollar title in June 2013. Photo by Christine Coons

Of course, that’s not the complete list, just who DiBiase has heard will be attending. “By word of mouth I’ve heard of the other guys,” DiBiase said. “For events like these, the company contacts the talent and wants to know if you’re available and if you’re interested. I was both.”

Events like these are some of the rare times that DiBiase, as well as all the other WWE Legends, get to see each other. “It’s like any other business. You form different relationships with your different coworkers,” DiBiase said. “Some of them become personal friends, not just colleagues. That’s me and Mike Rotunda.”

Even though DiBiase and IRS will be at the event, don’t expect a Money Inc. reunion match. “The only thing I can guarantee is that you will NOT see me in boots and tights and you will NOT see me wrestling on this show or any other show,” DiBiase said. “I’m going to be 60 years old in about 15 days (His birthday is January 18). My wrestling days are over.”

Jokes aside, DiBiase wasn’t kidding when he said that’s all he can guarantee because even he doesn’t know how he’s going to be used on Raw. “I don’t know until I get there,” DiBiase said. “It’s wrestling. They don’t send you a script of what’s going down ahead of times. That’s how we do things. You kind of have an idea of what you’re doing along the way but you don’t really know until you got there.”

It may be a little sad for fans of when DiBiase was an active wrestler, but DiBiase is at peace with the fact that his active wrestling career has ended. “I had my career. I had my run and enjoyed it.” What might be a little surprising is that DiBiase actually doesn’t have a list of some potential fantasy matches he’d like to participate in, mainly because he no longer religiously follows what’s going on in the WWE any more.

“I know some of these guys but I don’t know what’s going on all the time,” DiBiase said. He did say that he would have liked to have had a match with his boys and Rotunda and his two sons (Bo Dallas and Bray Wyatt), but that time has come and gone. “My boys have tried it and decided they didn’t want to,” DiBiase said. “His boys are right there in the middle of things right now. Good for them.”

Even though DiBiase has no desire to lace up the boots again, the times he has thought of going back to the ring, it would be as a mentor, rather than some fantasy match to stroke his ego. “I’ve watched some guys and thought, ‘Wow. He’s got talent. I’d like to get in the ring and show them some stuff.’ But nothing beyond that,” DiBiase said. “Have I ever thought about what it would be to be in the main event with The Rock? No. It’s not one of the things I think about.”

For those who only grew up watching Monday Night Raw, you sometimes forget that one of the biggest draws of the show was the fact that it was done live and that anything could conceivably happen. With Money Inc, a possible APA reunion and maybe the Nature Boy or Bob Backlund putting Randy Orton in his place regarding his ranks among WWE Champions, this could be one of the better episodes of Raw.