Notes from the crowd at Raw in Toronto

Before the show, the merch tables were packed, with lots of people getting the Wyatt Family shirts, and a one night only Edge shirt with today’s date on the back. 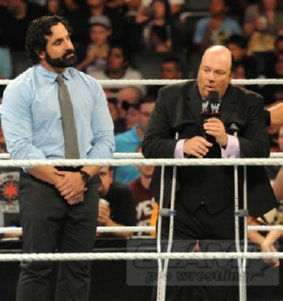 The building looked pretty much full. The audience included lots of kids, but that didn’t stop a chorus of boos from filling the arena when John Cena was shown on the TitanTron.

Before the show, Justin Roberts posed with some of the ringside fans before getting into the ring to announce the taping of WWE Superstars was set to begin.

1) The Usos beat Heath Slater and Jinder Mahal (3MB). Good match that had the crowd reacting throughout – a “3MB” chant broke out at one point. Slater is terribly under-rated.

2) Zack Ryder vs Big E. Langston was pretty much a squash. Langston won with the Big Ending.

Paul Heyman’s personal doctor was portrayed by local indy star Asylum. He’d later post on Twitter, “This doctor’s got a fever and the only prescription is more kendo stick!” (@Asylum1240)

After the cameras turned off, Orton got up and Justin Roberts announced him as still the WWE Champion.

Before the match, Heyman announced that the match would NOT be for the I-C Championship.

Punk came to the ring and laid out Axel with the Singapore cane. He then started wailing away on Heyman with the cane, but Axel low-blowed him from behind. Axel posed for way too long, and Punk recovered and hit the GTS out of nowhere to get the pin. Heyman ran off before Punk could get to him. After the match, Punk went back to the ring and hammered Axel with a chair until Axel escaped.

It was announced that WWE would be returning to Toronto for a house show at the Ricoh Coliseum on Dec 30. Tickets are on sale now.