With WWE’s 20th Anniversary of Monday Night Raw approaching, the first ever World Wrestling Federation Commissioner Sgt. Slaughter took a few minutes of his time to talk about the past 20 years and some of his favorite moments this show has provided. 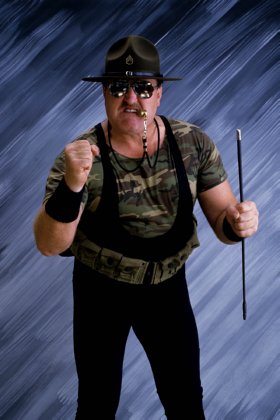 Sarge was working with the WWE when the first episode of Monday Night Raw aired. He fondly remembers the craziness that took place just to set up the Manhattan Center for the first episode. “We didn’t know what was going to happen out there,” Sarge said. “The Manhattan Center is this small little building that’s not made for professional wrestling, much less a professional wrestling production.”

If you’ve never been to the Manhattan Center, specifically the Grand Ballroom where the event took place, it’s amazing that the WWE was able to transform a place built for big bands and dancing events, into a workable professional wrestling arena. “I remember going up and down the elevators, unloading trucks and we all were helping each other out,” Slaughter remarked. “We had a time restraint… It was just a crazy time.”

It turned out the WWE really liked taping episodes of Raw there, as the Grand Ballroom would host Monday Night Raw 28 times. A lot of Sarge’s favorite memories from Raw came from that building.

His favorite moment that Sarge was not a part of was the May 5, 1993 episode which featured a parking lot brawl between Intercontinental Champion Shawn Michaels and Mr. Perfect Curt Hennig.

Michaels was cutting a promo outside the Manhattan Center when Hennig came out of nowhere and proceeded to beat down Michaels, throwing him into the side of a door and then on top of the car, smashing the windshield. The car was owned by WWE Hall of Famer Howard Finkel, and suffered $3,300 of damage.

“I rode to the arena with Howard Finkel and the next thing I know we’re looking live at the monitor and they go through the windshield of his car,” Sarge remarked. “I’ll always remember Howard jumping out of his chair going, ‘That’s my car! That’s my car!’ I said to him, ‘Yeah, that is your car.'”

Sarge remembers the two of them heading outside to see if it really was Finkel’s car. “We got out there and sure enough, it was his car,” Sarge said. It gets worse for both Sarge and Finkel. “We had to bundle up pretty good that night to drive it back to Connecticut because we couldn’t leave it in New York City.”

It was the unpredictability of moments like that on Raw that led to Slaughter’s all-time favorite episode of Monday Night Raw. One week after the car fiasco, May 17, 1993, an virtual nobody, simply known as “The Kid” (Sean Waltman a.k.a. X-Pac) would go on to upset Razor Ramon (Scott Hall) in less than three minutes. “That started a lot of the success of where we were looking to go,” Sarge recalled. “It was one of those moments you hope works out. It (Raw) is still going on today so I guess it must have worked.”

For Sarge, seeing Waltman pull off the upset was great for him because it was Slaughter that brought him to the WWE. “I saw some tapes of him and I brought them to Mr. McMahon for his attention,” Sarge said. McMahon said that Waltman was “a little small.” Sarge agreed but told McMahon, “Look at what he can do. He’s all over the place (in a good way). We hadn’t seen much of that at the time in professional wrestling.”

For all of Waltman’s wrestling ability, he was terrible on the mic at the beginning of his career. “He had so much ability, but he couldn’t do a promo for the life of him,” Sarge quipped. “I worked with him on promos from about 2 p.m. until 10 p.m. All for a 30-second promo. Finally I just said, ‘Okay, let’s wrap it up.'”

That was when Waltman had just flown into town and didn’t have a place to stay yet. “I was living in Western Connecticut at the time so I took him home,” Sarge said. “I stopped and picked up a couple of steaks, called my wife up and told her we were having a guest for dinner and to get the guest room ready.”

But it wasn’t just that upset match that made that episode of Raw Slaughter’s favorite. Later in the show, Marty Jannetty, who hadn’t been in the WWE in more than a year, showed up to challenge — and defeat — his former Rockers partner Shawn Michaels for the Intercontinental title. “That episode showed that anything can happen on Raw or any WWE live event. Vince McMahon strived on the element of surprise and it sure surprised us all.”

For all three matches, Sarge listed these people because they were “talents that I wanted to work with as a wrestler.” The three matches are definitely intriguing. Option number one would be a Mr. Perfect vs. Randy Orton match, option number two would be a Triple H vs. Shawn Michaels (both during the original DX era) match and the absolute dream match would be The Undertaker against Andre the Giant. (Although Andre wasn’t an active wrestler when Raw first aired, he was still alive, so we’ll allow that one.)

Those who remember Slaughter’s time as the Commissioner will probably remember that there was a Triple H/Shawn Michaels match for the European Championship that didn’t go the way Sarge thought it would. “I would have loved to put them against each other, which I did but it backfired on me,” Sarge said. “I need some stipulation where these two talents can go out and show what they can do. I know they’re best friends and it’s tough to get them to fight each other.”

With 20 years of WWE Raw now in the books, what will the next 20 years of Raw look like? Will the show still be on television or will it evolve into something online or simply as part of the WWE App? Whatever happens in the next two decades of professional wrestling, it will always be interesting.