While Levi’s Stadium has not yet completed construction, it may very well come down in early 2015. With the San Francisco 49ers being a perennial playoff team in the National Football League, the stadium should be rocking in the early stages of the year. However, the stadium will not receive a break from sporting pandemonium after the NFL playoffs conclude. 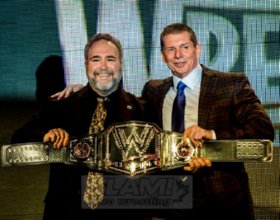 WWE WrestleMania XXXI will be held at the Santa Clara-based stadium on March 29, 2015. The WWE held a press conference Tuesday morning to announce the plan, which confirmed that “The Granddaddy of Them All” in the sports-entertainment world be centered in the Bay Area.

Rosenberg also gathered thoughts on the event from the 49ers CEO. “WWE is certainly a model for innovation as they have perfectly blended the worlds of sports and entertainment. We look forward to providing the most technologically-integrated WrestleMania experience ever,” York said in a statement to the paper.

In addition to the event itself, the week-long extravaganza that precedes the show will have events centered in San Jose and San Francisco — the WWE Hall of Fame ceremony and Monday Night Raw will both be in San Jose. Tickets go on sale late next year for the 31st installment of the event.