Wrestling and religion mix in ‘A Masked Saint’

“I believe in the story of someone who wants to do good, and that was the primary idea behind the story that really drew me to it,” said Warren P. Sonoda, the director of the movie, A Masked Saint. “I came on pretty late in the project. There had already been several drafts of the script and what kind of drew me to it was kind of the idea of trying to make a family film with a lot of wrestling in it. There was a challenge there, because on the one hand, you have sort of a spiritual journey of a man, trying to come to terms with his place in the world, and part of that has to do with ‘Is he going to use his fists? Or is he going to do it behind the pulpit?'”

A Masked Saint it is about a retired professional wrestler named Chris Samuels (the character that is based on Dr. Whaley) who moves his family to a small town, to start a new life as a pastor. But when faced with challenges beyond his control, Samuels quietly turns back to professional wrestling, in order to overcome them. 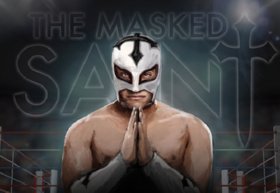 Brett Granstaff, who plays Chris Samuels in the movie, is very determined to overcome some of the more challenging aspects of the role, and he finds the story to be truly inspiring.

“I was drawn to this role, because of the complexity of the role. I wanted the challenge of tackling such a complex character. This role has three unique sides: Chris is a wrestler, Chris is a pastor and Chris is a father and loving husband, who is having problems at home. Just one of those would make a great film; in this role, I get to tackle all three. I also wanted to get in the ring and learn how to wrestle. I grew up watching WWF back in the mid-late ’80s. I remember going to a show in Nashville and being blown away by the moves and the spectacle of everything,” Granstaff said. “The real Chris Whaley and Pastor Chris Samuels are very similar. A lot of the circumstances and events that happen to Pastor Chris Samuels also happened to Chris Whaley. The major differences are that we have embellished some of the events or changed the locations and circumstances of certain things. But as a whole, Chris Whaley and Pastor Chris Samuels are very similar on paper. However, as an actor, I wanted to develop my own persona and character for Chris, which is why I never met him in person before we started filming. I spoke with him a few times, and we communicated a lot via e-mail and Facebook. I knew that he was a pastor and that he wrestled on the local circuits in Texas, during seminary school. He is a great guy; I was surprised by his wicked sense of humour. He is always cracking jokes.”

It’s been five years since the movie The Wrestler was released in theatres. The film touched the hearts of people worldwide, both wrestling fans and regular moviegoers alike. Most historians would likely agree that it was as true as a true story can be, without actually being based on any specific person. Naturally, there are going to be a lot of comparisons between The Wrestler and A Masked Saint, because of that wrestling connection. There might be some similarities, but in actuality, the movies could not be more different.

“I really approached this as a story. It’s not specifically a wrestling story, it’s not specifically a religious story; it’s a story of a man. It applies to everybody. People that are wrestling fans will get a kick out of it, because the wrestling is really cool. Some of these moves are moves that have never been done before in a ring, because they’re too dangerous. With the spiritual side of things, I believe in people wanting to do good, and I think that part will really resonate with a large portion of the audience that’s going to be coming to see an inspirational, spiritual family film,” Sonoda said. “I think (this is different), because it’s based on true events and inspired by real-life things that have happened to Pastor Chris Whaley. There’s a very specific feel to the small town that we recreated. It’s a town that’s just looking for direction and when a pastor comes to town, who is able to either preach from the pulpit or take action into his own hands and fists, things just change around. And that’s interesting, because that’s sort of the spin on the pastor turning into something else or someone from another profession finding his calling and working in the ministry.”

“I know nothing about wrestling, so in a lot of ways, I’m the perfect director to do this, because I can approach it from a laymen’s perspective and ask questions like ‘Why is this done this way?’ Or ‘How are we supposed to do this?’ And then it’s edited by a lot of technical consultants like Pastor Chris Whaley, who is the man that the story is based on,” Sonoda said. “We had Roddy Piper with us, during the scenes with the wrestling; he was a great resource. I said ‘Roddy, you were there. You tell me how this happened.’ And he would say ‘Oh, we do this.” There’s a wrestler named The Grim Reaper, played by James Preston Rogers, and he was an ex-pro wrestler. They all kind of surround me and give me the information I need to make the scene work.”

The best actors are probably the ones who can take on several very different roles and interpret them in different ways, but also make it believable. Out of everyone involved in the movie, Granstaff probably has the toughest job; not just because he’s in the lead role, but also because he’s essentially playing three very different characters in one: wrestler, pastor and family man.

“When I first began this journey, I thought it was going to be very difficult to make the transition between a pastor and a pro wrestler. That was one of the main reasons I took on this role. How does one justify being a pro wrestler and also being a pastor? After living with this role and character for a while, I have come to realize that those two professions aren’t really that dissimilar. As a wrestler, you create your persona/character, your routines, your calling cards and then you play to the crowd and get your fans and your followers. A pastor has a very similar task. As a pastor, you have to find your voice as a pastor, and how best to interact with your church and your followers? It also helped that I was playing the ultimate babyface. If I was playing a heel, it would have been much more difficult,” Granstaff said. “As for wearing a mask, I am not worried about connecting with the audience, under the mask. I can say a lot with my body language and with my eyes. I made sure I had big cutouts in the mask for my eyes, because I wanted to still be able to communicate, using my eyes and my looks. Between my body language and the looks with my eyes, I can still communicate and let the audience know what is going on; it’s a case of show, don’t tell.”

The movie, which is being shot in Sault Ste. Marie, Ontario, is expected to be released in theatres across Canada and the U.S. in the summer of 2014.

“When you take action into your own hands, you have to be ready for the consequences. It’s all about learning the right and wrong of it. That’s what Pastor Chris in the film, ultimately does,” Sonoda said. “The wrestling is a metaphor for good and evil, because in wrestling, you have the faces, you have the heels and you have the story line. When you try to diverge from that, that’s when badness happens. When he diverges from the scripture and the sermon and he takes things into his own hands, that’s when all hell breaks loose.”

Blaine van der Griend now has one more reason to look forward to next summer.