Hell in a Cell has Paul Heyman intimidated

Paul Heyman swears he is not nervous about entering the Hell in a Cell complex on Sunday, teaming with Ryback against CM Punk. But he does find the very idea intimidating.

“The concept of walking into the Cell is intimidating because there’s a level of expectation to live up to,” Heyman admitted to SLAM! Wrestling. “I think ever since CM Punk and I have been presented together or against each other on television that we’ve delivered quality segments in everything that we’ve done, including SummerSlam with Brock Lesnar, including Night of Champions with Curtis Axel. So there’s an expectation from us and the audience to deliver a certain level of performance inside of the Cell — and that can be intimidating.” 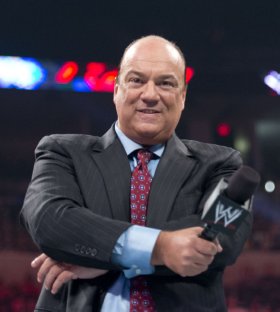 At 48 years young, Heyman knows that he can’t exactly be a bumping machine in the ring.

“I also am looking forward to it, because I think everybody involved is smart enough to know, both the resources that we have to use with that cage and the limitations that we are constrained by, just in terms of what I’m able to do,” he said. “I think we rise to the occasion on stuff like that. I’m not nervous about it, but I’m certainly aware of what a disaster it could be. I think once again we’re going to pull something out that people are going to be really buzzed about.”

Buzz is a good word to describe Heyman as well. There’s an electricity when you talk to him; he’s thoughtful, quick on his feet, self-deprecating but confident; he’s experienced in both the highs and the lows of the wrestling business.

Having started as a manager in the AWA and NWA/WCW, before being the creative means behind ECW, Heyman is back where he started in a way, but far more knowledgeable and appreciative of everything.

“Surprisingly, it’s fun to be back,” he chuckled.

The bumps are different than when he accompanied the Original Midnight Express or Samoan Swat Team to the ring.

“It took me this long to learn how to do them,” he laughed.

The idea is that Paul Heyman, the character on WWE television and not the real person, has to do the bumps, he said.

The Hell in a Cell match is meant to be a finale of sorts, the way a cage match was back in the day.

Like most of the WWE Universe, Heyman is curious about the other Hell in a Cell match on Sunday’s pay-per-view, from Miami — Daniel Bryan versus Randy Orton for the vacant WWE Championship with Shawn Michaels as the special guest referee.

“The championship has really been up in the air for 60 days now, and that’s unprecedented in WWE,” said Heyman. “They have to settle in now on where they’re going with the championship, and wherever they’re going, the next step that has to take place. I can’t imagine it’s going to continue being Daniel Bryan and Randy Orton just locked together at this level of intensity past this Sunday — so there’s going to be resolution this Sunday, one way or another between Daniel Bryan and Randy Orton. I’m looking forward to how that plays out, because it’s that old expression that we used to use in ECW: ‘It’s a match that both men have to win and neither man can afford to lose.’ So I’m really interested to see how things play out.”

Just as we are interest in where Heyman, the “advisor” goes next, with his charges Ryback, Curtis Axel, and the part-time Brock Lesnar.

Paul Heyman’s insight helped a lot into Greg Oliver and Steven Johnson’s book, The Pro Wrestling Hall of Fame: Heroes & Icons (with Mike Mooneyham), but he’s only quoted once. Can you find out where? Buy the book! Greg can be emailed at goliver845@gmail.com, and you can follow him on Twitter @gregmep.