Anyone who has ever conducted an interview typically has one great fear, which is that the end result will be something largely incomprehensible and difficult for people to follow. Unfortunately, Kayfabe Commentaries’ latest release, Breaking Kayfabe with Marty Jannetty, spills into that realm of incoherency.

Despite the efforts of KC’s interviewer Sean Oliver to try and rein in Jannetty, he largely fails, and so what is left are stories that veer off wildly into unrelated or trivial tangents that make for a frustrating viewing experience. 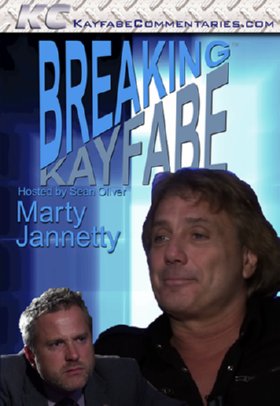 As well, the interview is very short, clocking in at an hour and 11 minutes. Usually, Kayfabe Commentaries’ interviews are approximately two hours, so this was an early sign that there might be something amiss.

The interview does expose, though, the effects that Jannetty’s lifestyle has had on him. Throughout the interview Jannetty fidgets, is unable to sit still, and gets up out of his chair several times. He also frequently seems to have difficulty focusing and loses his train of thought when responding to questions posed by Oliver. As well, during the interview, he has an almost glassy look in his eyes. At times, it’s difficult to watch as it’s inevitable to make a mental comparison to how Jannetty was during the 1980s and 1990s versus today.

The tragedy is that the interview does contain some interesting information about why Jannetty and Shawn Michaels quit WWE, just prior to Michaels starting his solo career. The reason for the resignation given is it was because Jannetty and Michaels were paid a significantly lower amount compared to other talent for a commercial. Additionally, Jannetty gives the impression that Michaels expected Vince McMahon to counter the threat of quitting by paying them the same amount as the rest of the talent. Alas, the gambit backfired with McMahon telling them they could finish up at Survivor Series, and Jannetty declares that what was really going on was that this was WWE’s attempt to begin the separation of The Rockers.

The remainder of the interview primarily focuses on details related to Jannetty’s sexual escapades, his struggles with drugs and pain killers, contemplation of suicide, his family and growing up in the southern United States, becoming a Born Again Christian, and dealing with his knee and ankle problems on a daily basis. Many of these subjects would make for interesting viewing, but again they are marred by the fact that Jannetty constantly veers off onto inconsequential particulars and Oliver, despite a game effort, is only marginally able to pull him back in.

Out of these, Oliver is most successful at keeping Jannetty on topic when he discusses his knee and ankle problems. This leads into a compelling discussion about why if the WWE is willing to send wrestlers to rehab for their addiction problems, why are they not willing to pay for the surgery to repair the problems that wrestlers suffered from their time working for the company? Jannetty points out that the reason he takes prescription pills is to deal with the pain from his knee that impedes his ability to walk properly; and that he had in fact talked to the person in charge of the WWE Wellness Program and asked if they would be willing to pay for him to have surgery. The response Jannetty says he received was that if the WWE did that for him they would have to do it for everyone. If this is in fact true, it demonstrates a monetary decision on the part of WWE, and shows a lack of caring and compassion for all the wrestlers who sacrificed their bodies over the years who generated enormous profits for the company.

The interview ends with Oliver asking Jannetty five rapid-fire questions, such as, if he could have dinner with anyone living or dead who would it be. Ironically enough, Jannetty stays completely on topic for these last couple of minutes and gives clear and concise responses. It suggests that perhaps if Oliver had resorted to this approach more throughout the interview, the overall product would have been more intelligible. However, by the end of the interview it’s quite clear that Oliver is completely exhausted, and a bit exasperated, from interviewing Jannetty. Also, based on Oliver’s facial expressions it’s pretty evident he knows how much the interview has gone off the rails.

Hopefully, this interview is just an aberration and Kayfabe Commentaries’ future releases will return to the high standards of some of their past interviews. Thus, KC’s Breaking Kayfabe with Marty Jannetty is not recommended except for the most die-hard Jannetty fans.