The Marty Jannetty Story is one of the most compelling documentaries made about pro wrestling. Jannetty’s time in wrestling seems to be a warning to all young wrestlers about what can go wrong. Ranging from substance abuse, to trouble with the law, to trouble with women, Jannetty seems to have covered every vice.

Marty Jannetty is the reason why the documentary works so well. He gives the producer unlimited access. No question is out of bounds. His tales of excess just pile on top of one another. At certain points, viewers will find themselves yelling, “Marty, dump the girl,” or “Don’t do that last hit of crack!” Of course, Marty never does dump the girl and smokes the crack and pays the inevitable consequences.

Jannetty should be credited for not placing the blame on his fellow wrestlers. The documentary could have easily turned into a shoot interview where other wrestlers are thrown under the bus. Jannetty accepts responsibility for most of his problems. The one wrestler he seems to harbour animosity towards is Shawn Michaels. It is not surprising as Michaels became a superstar, Jannetty’s career was going into the toilet. 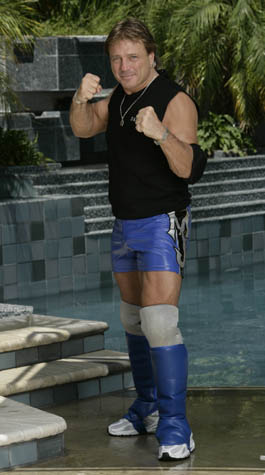 A recent photo of Marty Jannetty.

Jannetty is bitter about a certain episode during his wrestling career. In a Rockers tag team match, Jannetty had a move go wrong with a jobber named Charles Austin. Austin’s neck was broken and he later sued Jannetty and the WWE. Jannetty was found to be partially responsible and had to pay a large sum of money to Austin.

Although Jannetty’s personal life appears to have been a disaster the last two decades, he still is at home in the ring. There are several scenes where Jannetty is wrestling with younger wrestlers on the indy circuit. He genuinely seems to care about giving them advice on how to improve and make it in the business. Despite all the substance abuse, Jannetty is still a very capable ring worker and is in decent shape. The matches may not have the flare of the Midnight Rocker days but are still very entertaining.

One thing that differentiates The Marty Jannetty Story from other independent wrestling documentaries is the quality of the production. The documentary is well shot and the audio is clear. These may seem like necessary prerequisites but many productions have an amateur veneer about them. The Marty Jannetty Story does not appear to be edited in somebody’s parent’s basement.

While the documentary is well made and interesting, there are a couple of minor complaints. It clocks in at over four hours. Jannetty’s stories are fascinating but could have perhaps been edited for brevity. Also, a couple of matches from Jannetty’s days in the AWA or WWE would have completed the documentary, though I understand WWE copyright probably would prevent any of these matches from being included.

The documentary ends with Jannetty sharing a story of how Shawn Michaels helped lead him to becoming a Born Again Christian. Jannetty pledges his life to God and claims he wants to work with disadvantaged youth. While the viewer will want to wish him every success in his new life, you are left with the lingering feeling Jannetty has not dealt with all of his personal demons. Hopefully, we will see Jannetty on a future episode of Raw rather than Cops.