With her funky hairdo, piercings, and tattoos, Quebec’s Angie Skye tries to stand out in a world of too many Barbie-doll Divas. So at the last Femmes Fatales show, when she got to wrestle her doppelgänger, Christina Von Eerie, it was actually a little weird, but in a good way.

Von Eerie, who hails from Sacramento, California, and has more experience than Skye, having worked in Mexico and in TNA as Toxxin, is perhaps a little more punk rock than Skye.

They met only recently at a SHIMMER taping in suburban Chicago. 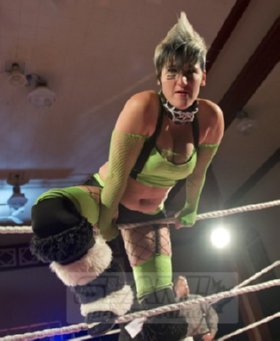 Angie Skye at the Femmes Fatales show in Montreal in July 2013. Photo by Minas Panagiotakis, www.photography514.com

“We were standing side by side and we were practically the same thing,” recalled Skye. “The first thing that came to mind is that I either have to team with her or face her. We’re too similar. When they told me I was facing her last Femmes Fatales, I was ecstatic; I was so happy. It was something I could check off my bucket list.”

This go around, on Saturday in Montreal at the Centre Sportif St-Barthélemy (7111 des Érables), it’s a three-way dance with the very blonde cheerleaderish Kimber Lee facing Von Eerie and Skye.

Skye has been trying to stand out for a while now, both in and out of the ring.

“I consider myself out of the ordinary. Usually people fit in a little box; well, I’m a little circle,” she said. “I like tattoos, I like piercings, I like funky hairstyles. I like standing out. I want to be noticed for the fact that I’m not like all the other girls, the Barbie thing.”

Von Eerie gives props to Skye. “Certain alternative looks get grouped together. For example, Gothic and metal and punk rock and skater will get grouped together because you have that ‘rock image.’ I personally hate getting placed into a group, just — for example– because I have a Mohawk. It’s just a haircut,” Von Eerie said. “It’s all about how different and original you can be. Angie has her own look and her own personal style. She is who she is inside and outside of the ring. I have respect for anyone who can go out there and represent themselves for who they really are.” 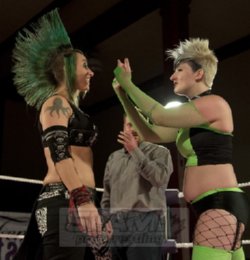 Christina Von Eerie laughs at the brashness of Angie Skye at a Femmes Fatales show in July 2013 in Montreal. Photo by Minas Panagiotakis, www.photography514.com

This past weekend, she piled into a car with Madmoiselle Rochelle, Midianne, and Mary Lee Rose for the 15-hour drive from Montreal to Chicago for a chance to be a part of SHIMMER, and its pre-show Sparkle matches.

It’s Skye’s third trip to SHIMMER, and she loves the atmosphere.

“The girls there, they help you a lot,” she said. “I still consider myself new. All the girls there have a lot of experience. Every time I do a match or whatever, they give me their point of view so I can become better. The whole feeling there is amazing.”

Skye, whose birth name is Myriam Desgagné, was born was born in Ottawa, Ontario, but grew up in Saint-Hubert, Quebec. “My father was in the Army, so he was travelling a lot,” she said. Her father, though, was a fan of the squared circle.

“It’s classic. I was watching wrestling with my father. It was always a big passion,” she recalled.

Naturally, the next step was to dream of becoming one of the larger-than-life wrestlers. 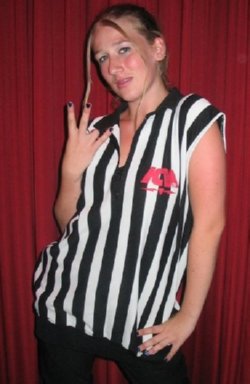 A young Myriam Desgagné as a referee in ICW.

“When I was a kid, ‘Oh, I want to become a wrestler!’ At one point, a friend of mine brought me to a wrestling show. The second time I went there, they told us they have wrestling classes,” she reminisced. About a month later, she got the nerve to do it — and had to tell her Dad. “I told my father, and he said, ‘Oh, can’t you be like a normal kid and do soccer or basketball?’ From there, it was a growing passion. I always want to learn more. I always want to become better. There’s not a stopping point for this.”

Her training was at the ICW school, under Rocky Stone. She was the only girl in the class.

“From the start, they told us in wrestling, there’s no sexes. It’s just two persons facing each other,” she said. “They didn’t go softer because I was a girl. They treated me like one of the guys.”

The training went on for about three years, and then she started heading out to learn from other people. The debut of Angelina Skye — her original ring name, shortened to Angie Skye by Femmes Fatales — was about four years after beginning training.

“I didn’t see myself as good as other people told me I was. Confidence issues, I guess. I don’t consider myself super-good or super-talented, but what I do, I do it well,” she explained.

Even now, years later, the 5-foot-4 Skye isn’t one to brag about her skills, even if Femmes Fatales has been solidly moving her up the cards, and have added “The Angel of Death” to her name.

Much of the credit goes to Gen Goulet, who is better known as the veteran women’s wrestler LuFisto, the driving force behind Femmes Fatales.

“The fact that the girls are getting a lot better and the fact that we girls have a better path in wrestling is because of her,” said Skye. “She opened a door and she always has our back. The fact that I got better, because at first, I was pretty much average, Sweet Cherrie helped me a lot. She’s one of the veterans here in Quebec wrestling. Then I started wrestling a lot more with Kalamity, and then I took on Gen. I’ve learned SO much. Those were the stepping stones for me to get a lot better.” 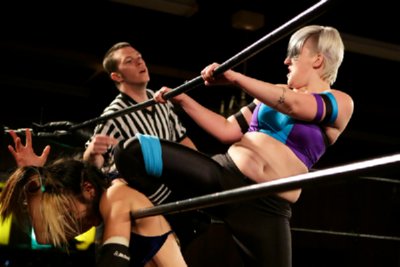 Angie Skye keeps Mia Yim pinned against the ropes in Angie’s debut on the main roster of SHIMMER this past weekend. Photo by Ricky Havlik, RickyHavlik.com

Skye considered what she could improve on.

“When I wrestle I focus too much on the match; I don’t focus on the interaction with the fans,” she said. “I’m more wrestling for me than them, which, technically I’m supposed to be wrestling for them; and a few technical things when you wrestle, but that will come with time.”

Away from the ring, when she is just Myriam Desgagné, sewing is both a vocation and a joy — she makes her own ring gear. For someone with such lively hair it was surprising to hear that a career in hairdressing didn’t work out. 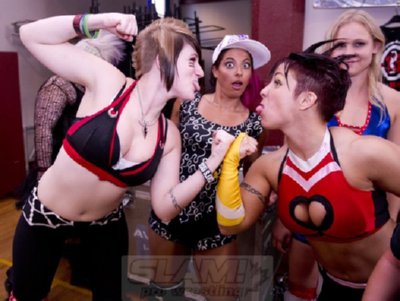 All in all, Skye gets a rush out of performing, but can’t quite see it ever becoming her main line of work.

“No, I don’t think so. I love wrestling, but not to do it as a full-time job. It’s hard on the body, it’s hard on the mind,” she said, sharing her goal. “But there’s one thing for sure, right now I’m more on the Sparkle roster of SHIMMER, but my main goal is to be on their main roster, and to be featured on their DVD.”

Time for a new addition for the bucket list, Angie — on Sunday, she participated in a main roster SHIMMER match, losing to Mia Yim, for a bout that will be on SHIMMER Volume 61.

— with files from Dan Murphy

The words “funky,” “tattooed” and “piereced” have never once been used to describe Greg Oliver, the Producer of SLAM! Wrestling. Greg can be emailed at [email protected], and you can follow him on Twitter @gregmep.