I almost hate to check my messages these days and when I get a phone call from a number I know is connected to one of my old wrestling friends and co-workers, I often hesitate to answer. Instead of the happy feeling you think you’d immediately get, my first thought is often, “What’s happened now and who died?” It’s a sad commentary that those thoughts come first, but after the last couple decades of receiving so many bad news calls and messages, it’s just a fact of life for many of us who worked in the wrestling business. 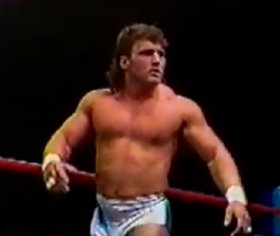 I came home from a wonderful weekend of wrestling, having worked two great events with NWA/New Japan in Houston and San Antonio and the morning after getting home, I was hit with the news that another of our Texas wrestling family had passed away from an apparent heart attack. “Hardbody” Calvin Knapp was only 43 when he died this past Sunday, October 20, 2013.

Calvin came into the wrestling business in the early 1990’s after competing in body building and as a close friend of Kerry Von Erich. He owned Hardbodies Gym in Terrell, Texas and was well known in the area as a successful businessman and trainer.

Calvin was only about 5’9″ tall, but he packed a solid, well built body into that relatively short frame. He was never the slick, technically perfect wrestler, but he had great appeal and understood how to make the most of the skills he had while displaying a great deal of charisma. Lady fans, in particular, loved him.

While he may never have had the light come completely on when it came to all aspects of working in the ring, he always had his heart in it and always gave great effort. He was capable of good matches, especially with the right opponent and his look and appeal made him a valuable piece of the puzzle for us in Dallas.  He carried the GWF Light Heavyweight title a number of times and could always be counted on to do his work in a professional manner. Anyone who had any experience with Calvin saw his love for wrestling in his work and the way he carried himself outside the ring.

When I was in between wrestling jobs for 2-3 months after the Sportatorium had closed and there were only some house shows here and there to work, Calvin had me work some in his gym in Terrell, helping with training and overseeing things. He was always very generous and I enjoyed being around him.  All of us who knew and worked with Calvin appreciated his friendliness and fun loving character.

Knowing Calvin’s obsession with body building and maintaining that degree of muscle mass during his wrestling career, his untimely death brings back my distaste for the implied pressures on that generation of guys to look a certain way and do whatever it took to get that look. Often, that meant placing extraordinary strains on body frames and organs that were not meant to carry that much muscle. In that respect, I still blame the powers that be (or were) during the 1980’s and 90’s especially, who made it pretty clear that if you didn’t have a particular look physically, your skills would probably never get you over enough to become a star. 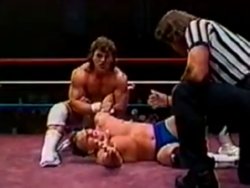 James Beard referees a match in GWF between Calvin Knapp and Alex Porteau.

I have no doubt that the climate created by those in power to achieve that look led to a lot of guys doing things in excess that put unnatural stresses on their bodies and those things, however long it might have taken for some, led to a lot of the health problems and deaths that have occurred within the wrestling family.

I know everyone is personally responsible for their own decisions and actions. I’m not discounting that and I’m not saying Calvin, in particular, or all who have passed at a young age did so because of excesses in striving for that kind of body. But, I will never believe the fact that we have lost so many relatively young wrestlers in the last couple decades in particular, is not directly or at least indirectly connected to the pressures, implied or otherwise, to look a certain way.

Calvin’s death is another sad loss for all of us who are a part of the Texas wrestling fraternity, especially those of us who have been around a while and have seen so many of our friends pass. There’s simply been too many gone too soon.

Because of that, I still hold my breath when I open my messages and hear my phone ring, hoping there’s no more bad news; At least for today.

CALVIN WAYNE KNAPP
Calvin Wayne Knapp was born June 23, 1970 in Dallas, Tx to Larry and Melba (Threat) Knapp and grew up in Mesquite, and graduated from Mesquite High School. He was into wrestling, weightlifting and bodybuilding from a young age. At age 19, he was named Mr. Teen Texas. In the early 1990s, he opened Hard Bodies Gym in Terrell, Texas. “Always a generous spirit, Calvin believed in giving back to the community he loved and he was an active and devoted mentor to many high school athletes as well as many others at Terrell State Hospital where he believed in the power of healing through exercise,” reads his obituary. “Calvin had a love for life and his family was his priority and he made sure he was a role model for them with his work ethic and perseverance. Calvin found happiness in every experience life had to offer. Sharing his time these past seven years with Shawn, his soulmate and partner in business, brought him joy and fulfillment with her love and support.”

Calvin is survived by his wife, Shawn White-Knapp, and children, Sierra, Chance, and Zachary Knapp, C.J., Gavin, and M’Cleigh White; his father, Larry, and brother, Ricky. He was preceded in death by his mother, Melba, and brother, Mike.

A Celebration of Life for Calvin will be on Thursday, October 24, 2013 at Anderson-Clayton Bros. Chapel at the Anderson Clayton Bros. Funeral Home, 301 W. Nash Terrell, TX 75160, beginning at 2 p.m.

James Beard was a professional wrestling referee and creative consultant for over 30 years, working for World Class, USWA, GWF, SWS/WWF in Japan, NOW/Japan, and Big Japan, as well as a number of other wrestling organizations. He is currently in the process of completing a book about his experiences in the wrestling business and is head of wrestling operations for NWA/Texas Stampede in Dallas and NWA ArkLaTex in northeast Texas.