Money in the Bank anthology climbs the ladder to success

The three disc DVD set or two disc Blu-Ray set clocks in at a whopping six and half hours. The Blu-Ray also includes also includes every match where the winner of Money in the Bank cashed in his contract to compete for a title, with the exception of Randy Orton at SummerSlam 2013 and Damien Sandow from, well, Monday night. 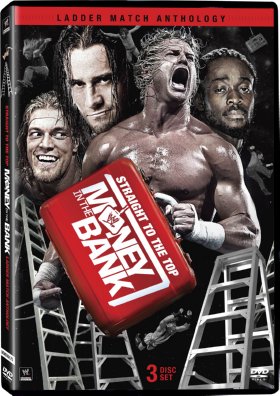 If you are looking for a documentary style DVD, you won’t find it here. The Miz, a Money in the Bank winner, serves as the host of the DVD, filling in the gaps with pertinent information or setting up a clip from the archives. Moments like Chris Jericho pitching the concept of the match on Monday Night RAW or Edge cashing in Money in the Bank for the first time are far and few between though. Most of the time though, when one match ends another starts right away.

With that being said, the real stars of this DVD are the matches themselves. Each match is shown in its entity without being edited, with one exception. The very first Money in the Bank Ladder Match feature Chris Benoit. WWE has done its best to expunge Benoit from the record, but some things you just can’t change. Benoit entrance has been removed and all audio mentioning has been cut. This leads to several stretches without commentary, which is a little jarring.

Visually, the matches look great. Even footage from the pre-HD era looks good, and two ladders fill in the space on the sides of your screen.

Even though the matches are the same style, they are by no means alike. With over 50 superstars competing over the eight year span each match tells it own story and features unique spots. Sure, you’ll see two wrestler fall to the floor from the top of a ladder as another participant pushes it. The anthology also can unintentionally highlight the holes in wrestling logic. In 2011, The Big Show introduced a heavy duty ladder that could support his weight into the match. The commentators explained what the ladder was, how much it weighed, even how it was built. Two years later when Show was in the match again, the commentators had no idea what this strange ladder was. Also we get to revisit the era of Michael Cole the heel play by play announcer; that’s the commentary that should have been taken out.

The big difference between Blu-Ray and DVD is that the Blu-Ray adds another two hours of footage. Every championship match where the Money in the Bank was cashed in is showcased in the special features. That’s a dozen title matches. SPOILER ALERT! Eleven of those challengers won the title. Also include is a behind the scenes look following The Miz’s WWE title win.

If you’re a fan of the Money in the Bank, (and who isn’t?) this anthology is definitely worth picking up, especially the Blu-Ray with the bonus footage. At over 8 and half hours of wrestling you are definitely getting a lot of bang for your buck. Plus the cardboard case has a pop up handle so it looks like a little briefcase!