The latest Kayfabe Commentaries entry in its Timeline series is Lex Luger. Prior to 1993, Luger was probably best known for his days as a member of the Four Horsemen and later challenging Ric Flair for the NWA World Heavyweight Title. However, by 1992 with Flair having absconded with the title belt when he went to WWE, Luger had concern about the direction the company was headed, so he reached out to Vince McMahon to see what his options might be. 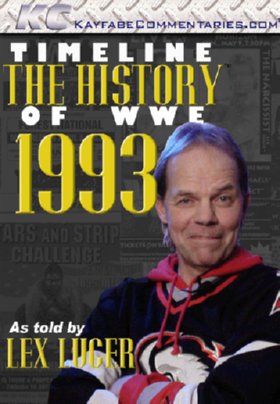 It is at that point which the Kayfabe Commentaries interview picks up, as Luger details how McMahon was able to cleverly get around the remaining year on his contract, and how that ended up having him join the World Bodybuilding Federation. It becomes readily apparent listening to Luger speak that from a business perspective he is very astute in understanding how things work and why; this would be a skill that would serve him well over the years.

The interview, also, touches on the three significant wrestling figures that passed away in the first half of 1993 — Andre the Giant, Kerry Von Erich and Dino Bravo — and the effect that each one had on the locker room. Luger reveals that the death of Andre The Giant hit Vince McMahon particularly hard and alludes to the fact that the two men discussed the matter a fair bit back in 1993. As for the reaction to the death of Von Erich and Bravo, Luger describes the predominant feeling in the locker room was one of shock, but that there were some who indicated having awareness of the matters that lead to each passing.

A particularly fascinating story Luger relates is his Wrestlemania 9 match against “Mr. Perfect” Curt Hennig. Prior to the match Luger explained he was feeling very relaxed, but when they were in the ring later on that quickly changed when Hennig admitted he couldn’t remember what had been planned. Luger would go on to acknowledge that he was only able to remember pieces of what they were supposed to do and that astute viewers may be able to spot that when watching the match back.

Additionally, Luger details how “The Narcissist” character was designed by McMahon and the rest of the WWE management, and just as he was getting comfortable in the heel role, he was brought into the office one Wednesday afternoon and told they were going to turn him into an all-American babyface.

In the interview Luger is very honest about having mixed emotions about the change, and the doubt he had that the switch to that type of character would work. However, he makes it clear that McMahon was able to reassure him, which led to the famous bodyslam of WWE Champion Yokozuna aboard the USS Intrepid.

As Luger discussed this, the subsequent Lex Express tour, and his SummerSlam match with Yokozuna, it becomes very evident his appreciation and affection for not only this time in his career, but also the fans. Luger even directly addresses this towards the end of the interview stating that he has a new appreciation that he didn’t have earlier in his career.

Luger’s failure to win the WWE Title at SummerSlam is also discussed, and while he declares that it would have been nice to win it, he states that he was taught in the old-school wrestling tradition by his trainer Hiro Matsuda that it is his job to do what the promotion asks and not to argue.

As well, Luger demonstrates a great deal of humility when he admits that some of his feelings about how the movement to different styles and sizes of wrestlers in WWE, which he didn’t approve of back in 1993, was wrong. The fact that Luger is willing to acknowledge such a thing in an interview says a great deal about his character and shows that at least nowadays he is nothing like the impression that people might have of him from his earlier wrestling days.

The interview finishes by discussing his Survivor Series match where he was the “sole survivor” and how he is today. For those not aware, in 2007, Luger suffered a nerve impingement in his neck which led to temporary paralysis; however, as of the time of this interview he indicated that he is in much better shape and a happier place.

Kayfabe Commentaries’ Timeline: The History of WWE – 1993 – As Told by Lex Luger is a very strong interview which provides some very good insight into that particular year in World Wrestling Entertainment history. Hopefully, Kayfabe Commentaries will invite Luger back for subsequent interviews as it would be fascinating to hear his thoughts in more detail on the NWA and WCW.