Highs, lows, and redemption all in Lex Luger’s story

In his book Wrestling With The Devil wrestler Lex Luger, along with co-writer John D. Hollis, walks the reader through the life of a man with an skills and an ego that propelled him through football to become one of the top professional wrestling stars of the 1980-1990s, his downfall, and his redemption in becoming a born-again Christian. Here are some highlights from the book. 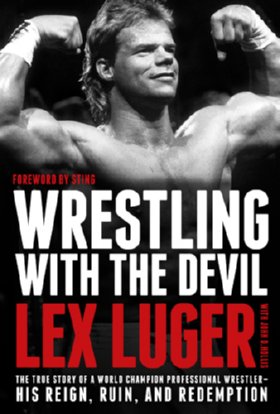 The foreword, by wrestler and friend Sting, is worth the read alone, speaking on how Sting did not like Luger when they first met, but ended up becoming business partners and friends.

The early parts of the book describes his childhood excelling in sports and going to Penn State University, University of Miami, the Canadian Football League, and ending up in training camp for the National Football League.

After being cut from football, Luger ends up meeting and training with Hiro Matusda in CWF (Championship Wrestling from Florida). He writes: “I was twenty-seven and Matusda had another twenty years on me, but he did everything he asked me to do.”

On deciding on his name: One of my favorite television shows was Magnum P.I. with Tom Selleck. I looked up magnum in the encyclopedia, which led me to research guns. TV’s Magnum carried a semi-automatic pistol; I thought in honor of my German heritage, a lugar would be apropos. It’s easy to guess where Lex came from – an homage to my favorite superhero, Superman, who battled his villainous archenemy Lex Luthor.

On his name “The Total Package”: Dusty Rhodes (The NWA Booker) was giving me a pep talk. “Let everyone know you have the brains, the brawn, and the professional football pedigree … You’re the total package.” The Total Package. Everyone loved the way it sounded, and we quickly passed it to the announcers to include it in the introductions.

On officially signing with Jim Crockett Promotions sometime after being a member of The Four Horsemen (Luger got a three-year deal for $350,000 annually): Because I was feeling empowered, I said one more thing. “Can we get first class airfare too?” I asked. At the time, Ric (Flair N.W.A. Champion) was the only Horseman who flew first class; Arn, Tully, J.J., (The other Four Horsemen) and I always sat in coach. I thought it sent the wrong message to fans and sullied the image of the Horsemen as athletes accustomed to only the finer things in life.

Signing With the WWF (WWE): After talking with Vince McMahon, Luger was to tell the W.C.W. that he was burned out and wanted a year off for other ventures. He would work with McMahon’s new World Bodybulding Federation (WBF) for a year, and then would become merge as a wrestler. W.C.W. let Luger out of his remaining contract, but the plan did not work, due to his motorcycle accident.

Teaming with Elizabeth in W.C.W. after his return in 1999 to W.C.W.: One day, early on, a friend of Elizabeth’s mentioned that Elizabeth had a thing for me. Although it was intriguing, I didn’t think very much about the comment … Not long afterward, I found myself in a full-blown extramarital relationship with Elizabeth, something I vowed would never happen to me.

The death of Elizabeth at Luger’s house, while sitting watching movies together eating TV dinners: She had taken a few bites of food, but the next moment I looked over, her head was rolled back as if she was sleeping.

She didn’t answer or move.

I sat my tray aside, walked over, and knelt down in front of her, moving the tray off her lap. I nudged her, but she didn’t move. Man she’s really out! I nudged her once again on her shoulder. She made a gurgling noise and some saliva came out of the side of her mouth, but she didn’t open her eyes. Something’s not right.

The book later discusses how when trying to get into Canada for a show, Luger was stopped at the border, and escorted back to Atlanta due to an outstanding warrant. After missing two meetings with his probation officer, and not doing proper paperwork to be allowed out of the state, the judge sentenced him to four months in prison. It was there he eventually befriended the chaplain, Pastor Steve, and became a Christian after spending time with Steve when Luger was released from jail.

After flying to San Francisco for an autograph signing, Luger felt a pain in his neck and back. Once he got into the hotel, he woke up at 3 A.M., stating, “I was jolted awake by the same unbelievable pain between my shoulder blades that I felt on the airplane. This time something was different. I couldn’t move anything except my head and shoulders. … The combination of my heavy workout before my flight and sitting on the plane with my head awkwardly turned had set my neck up for the ‘perfect storm.’ I had cut off the blood flow to my central spinal cord, which caused bruising and massive swelling … the result is the same; paralysis.”After the diagnosis, Luger was transferred to the Shepard Center in Atlanta, where the doctors told him:

“You are a C5-C6 quadriplegic. There’s always hope; however, realistically, there is very little chance of you regaining any significant movement from the neck down … Once home, you will need round-the-clock care.”

“For how long will I need that?”

Luger goes on to explain how his faith in God has led him to be able to walk, drive a car, and share his story to others, including helping others train in a more healthier way.

The book is one of the more interesting and positive wrestling books out there, and author Hollis writes in an easy to read way, with short chapters, which make reading easy to flow.