MISSISSAUGA, Ont. — With the WWE on tour in southern Ontario, Santino Marella took the opportunity to officially open his Battle Arts Academy Sunday night before heading back out onto the road himself.

The 15,000 square foot facility, in an industrial area near Eglinton and the 403 highway in Mississauga, the city to the west of Toronto, has been open for a few months now, but never really christened.

Sunday night, some of Santino’s colleagues from WWE made the trek after the house show at Copps Coliseum in Hamilton, including Damien Sandow, Xavier Woods and Alicia Fox, who held an impromptu gymnastics class for some of the young girls in attendance. Other notables on hand were Canadian boxing legend George Chuvalo, former WWE referee Jimmy Korderas, and Ontario indy wrestlers like Leah Von Dutch, Tomer Shalom, Buck Gunderson, Logan Savage, Anthony Fiasco, and Vane. About a thousand people came through to the open house during the hours that it was available, snacking on pizza, hors d’oeurves, and mini cupcakes, as well as bottles of water and protein shakes. 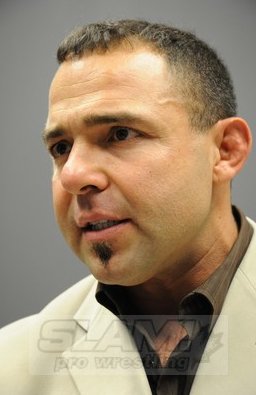 Anthony Carelli is the man behind Battle Arts Academy, but to WWE fans he is Santino Marella. Photos by Mike Mastrandrea

Battle Arts offers classes in mixed martial arts, pro wrestling, strength and conditioning, for the whole family. There’s a full MMA cage, a wrestling ring, and various other training locations with rings, weights, free weights, and other mats with various other workout tools, including a Thor hammer.

In conversation with SLAM! Wrestling, Marella was really Anthony Carelli, a hometown boy looking at life outside the grind of the WWE schedule.

“I don’t remember exactly when the idea came to me,” Marella said, “But I thought about how much I wanted to be able to give back. And what better place to do it than right here, right at home. My parents live four minutes away from here.”

“I knew that because I’m on the road so much, I wouldn’t be able to be there all the time,” said Marella. “So what better partner than Yuki Ishikawa? I was in Japan about a year ago, and met with him for lunch, and (we made a deal). He brings the best training that you can get in the world.”

The events area is named after Don Kolov — who was on hand as well.

“Don was so good to me. When I was young, he knew I didn’t have a whole lot of money. He was very generous to me, and helped me a lot,” recalled Marella. “Without him, I wouldn’t be here in front of you now. So I’m very glad and it was my pleasure to name the live events arena after Don.” 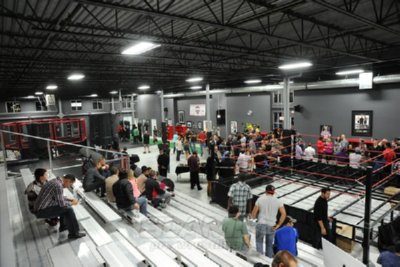 A good view of the Battle Arts Academy.

Marella hopes it is a brand that can expand. “It’s a world-class training facility, that just happens to be in your neighbourhood,” he said. “I’m most proud of the fact that we have the kids’ training right beside the mothers’ class. Every day, moms can bring their kids for judo or wrestling classes, while they do their workouts. It’s really something the whole family can do and be involved with.”

With WWE in Toronto at the Air Canada Centre on Monday night for Raw and in Ottawa for Smackdown on Tuesday, Marella and his dreaded Cobra hold may just be there.

“I arranged to have four months off. That four months is up, and now I’m ready to get back out there, and do what I love to do,” he revealed. “I just signed a three-year extension with WWE. I’ll continue to renew as long as I can.”

“Bloodthirsty” Bob Kapur is still aching from trying out the gymnastics with Alicia Fox. Heal him at bobkapur@hotmail.com.