Steve Martin once joked about how phony it sounded for every comedian, no matter where they were, to say “Hey, it’s really great to be here,” before gushing “Hey, it’s really great to be here” to his audience. The point is, it’s an old truth in show business that you can take your show from town to town and simply tweak a little local reference to endear yourself to the crowd before doing it all over again somewhere else the next night, nor was it any different in terms of taking wrestling shows from territory to territory before the advent of weekly television tapings.

Between the two recent WWE house shows in Windsor and Hamilton, you’d be hard-pressed to find any differences in the show except for R-Truth yelling out “Windsor” or “Hamilton” … but then, with R-Truth, I don’t suppose you’re guaranteed to know which city he’s going to pander to. I’ll tell you what, go read Matt Bishop’s review of the Windsor show again (because you already read it, right?) and I’ll tell you the similarities and the two differences that Hamilton’s show had to offer.

The line-up was almost identical, starting off with the Christian-less need for a Battle Royal to determine who would face Alberto Del Rio later on that night. Dolph Ziggler once again defeated Heath Slater and Jinder Mahal to seemingly win, before having to dispose of a returning Damien Sandow to win legitimately. Sandow then faced Big E Langston and lost; then it was Prime Time Players versus 3MB; AJ Lee losing to Naomi in a non-title (and slooooow-paced) match; and Fandango kiboshing a dance-off to start a match with R-Truth.

I wonder if the poll results of fan voting to originally decide between a match or a dance-off was the same: 70% of Hamiltonians were in favour of watching them dance. As suspicious as that may seem, I do believe I heard the excitement of exactly 30% of those in attendance when it turned into a match anyway.

After the intermission, things got a little crazy as Bray Wyatt took Erick Rowan’s place in the match against Tons of Funk; and then Xavier Woods did his best in taking on Ryback, losing but getting a good hand from the crowd for his efforts. 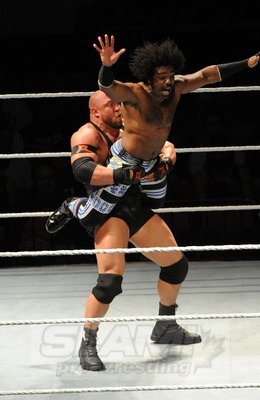 Before getting to the main event, you might wonder why you’d attend a house show if the results are almost identical to what transpired not many miles away. Well, the beauty of a live WWE show is that, when it’s clicking, it’s great theatre that draws you into the story. It doesn’t matter that you’d seen Hamlet before or read it in school — when you watch a live performance, if it’s good, then you’re drawn in as if you’re watching it for the first time.

And, in Hamilton at least, the WWE put on that kind of show. This was exemplified in the main event as Ziggler and Del Rio quite honestly lived up to the creed of giving their all no matter the size of the crowd (it was sparse in Copps Coliseum). By the conclusion of the match, much as it seemed to be in Windsor, they had the crowd ready to believe that there may just be a shocking title change in their own city, to be announced on Raw the next night. The performance by Ziggler and Del Rio was that good. 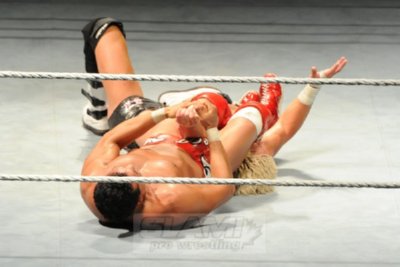 Yes, the ending fell flat again with the nonsensical late call for a disqualification, but the ride up to that point was terrific. They also improved on their “sign-ripping” bit, as Del Rio grabbed a kid’s sign for Ziggler and tore it up, only to have Ziggler walk over later on and not only give her his own shirt, but have her help him rip up Del Rio’s.

The crowd favourites on the night were, apart from Ziggler, AJ and Ryback, despite both of their attempts to vilify themselves and cast aspersions on Hamilton’s character. The hands-down heels were Slater and Mahal, probably because Hamilton’s rich musical history means people don’t put up with air bands (shouldn’t Rush’s Neil Peart have come out and lay a beating on them?).

Great songs, books, movies, and a multitude of other performances are at their best when a recipient feels like they were created just for them. For just under three hours in Hamilton, everything that the wrestlers did felt spontaneous instead of stale, familiar but not forced. From an outsider’s perspective, the show may not sound like much of a happening, but there’s another truism that goes hand-in-hand with great performances: “you had to be there.” By the incredible power of direct connection, the WWE delivered a show with “one night only” feel, no matter how many nights they’d done it before.