Q & A with Patrick Jones, author of The Main Event

The new book, The Main Event, is aimed at the Grade 4-8 crowd, but despite being marketed at a younger set, it references the early days of Gotch and Hackenschmidt, right up until today’s WWE stars. The man behind the book, Patrick Jones, is a veteran of the early teen market, and shared details of how the book came about, and what he wished he could have included, in a question and answer session with SLAM! Wrestling.

Jones, a former librarian, is probably best known for 2009’s The Tear Collector, but he has written a number of other novels, and contributed to various other books, including Guys Write for Guys Read: Boys’ Favorite Authors Write About Being Boys. He has also received numerous awards, including the Great Lakes Book Award for Nailed, and lifetime achievement awards from both the Catholic Library Association and the American Library Association.

Fans of combat sports will soon be more familiar with his work, as there is a similar book aimed at the later primary grades, Ultimate Fighting: The Brains and Brawn of Mixed Martial Arts, as well as a trio of MMA novels, Head Kick, Triangle Choke, and Side Control. 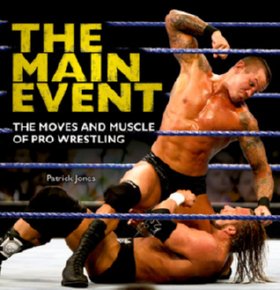 Q: Why the switch from teen fiction to non-fiction books on pro wrestling and MMA?

A: Actually my first published work was a story for the Long Island based fanzine In This Corner. I was eight and for the next few years I was the Detroit correspondent for the publication. My first article in my profession was called “Wrestling with Magazines for Teenagers” which was a call for libraries to buy more magazines of interest to boys, in particular pro wrestling magazines. This started me on a career of publishing and presenting to librarians and teachers about connecting young adults and libraries with a real focus on boy readers. When I was asked to contribute to the anthology Guys Read, I included a piece about growing up in Flint, Michigan, and not finding wrestling magazines at the library (my piece was one of two selected to be recorded / aired on National Public Radio). So, I was invited to lunch by a publisher and editor who wanted to “pick my brain” about boys and reading which lead to a conversation about a series they had called Spectaculars Sports, which lead to me offering my services to write the book. They took me up on it, and soon after it was finished, they asked me to do one on MMA. At the same time, my novel writing career had stalled for a hundred boring reasons, but this same publisher put on series books at non-readers — a.k.a. boys — so I pitched the idea of a series set in a Dojo with teens learning MMA as the backdrop for quick, easy to read, plot-driven stories.

Q: Why are there so few books on the history of pro wrestling aimed at kids and teens? There are lots of books about famous baseball, hockey, basketball players, etc.

A: There are surprisingly many, however, like The Main Event, they are mainly geared for the educational market. So, while you can buy them online, you won’t find them in the bookstore. Even more so than The Main Event, these books are geared a much lower level readers and focused on individual wrestlers as opposed to a history. The reasons are varied, but mostly because despite WWE’s “Did you know” hype about how popular they are, the interest level among young people is WAY down than in the past. Another reason — and this often gets me in trouble — is the vast majority of people buying these books are not only not wrestling fans, they are anti-wrestling. I recall back in the 1990s when I was trying to get a George Napolitano book on a national list of books for reluctant readers, and the female librarians spoke with great disdain about having something “so trashy and vulgar” in her library. And that was before the Attitude Era, so that’s another possible reason. And finally, like Mick Foley wrote in Have a Nice Day, there’s probably still the belief that wrestling fans, of any age, don’t read.

Q: What do you wish you could have explored more about pro wrestling?

A: Three things — first, I really didn’t have room / words (I had a set word count as is true of most series books) to explore the showbiz aspects that add so much. Intro music, costumes, character development, and fan interaction. Second, I would have loved to have made the history section much more detailed, but even in the history, I mainly focused on the WWE. Finally, it broke my heart not include my favorite wrestlers growing up (The Sheik and Dick the Bruiser) and since I live in Minneapolis now, every person asked why didn’t I include something about Da Crusher or Baron von Raschke.

Q: Is it hard to simplify and condense complex stories and histories into something more concise for younger readers?

A: This was very difficult to do because one of the main thing that fascinates me about the business is the backstage politics and that’s not something a 12-year-old cares about. Writing about the specific matches was difficult because combat sports again involve all the senses, and describing a suplex ain’t easy. Also, I couldn’t focus on again what I find most fascinating — how wrestlers put matches together because I tried to stay away from “it’s all a work” for the most part. Finally, since so much of the focus was WWE, I couldn’t talk about indies, ROH, TNA, or other than a side-bar wrestling in other countries.

Q: Was it harder to narrow down the Top 10 matches or pick the wrestlers to be included? Why?

A: Well, I had help thanks to those great Pro Wrestling Hall of Fame books… as well as Top 100 Pro Wrestlers of All Time book. I started with a list of 50 wrestlers and in the end could only include 16, but all of them, to quote Jim Ross, are “first ballot hall of famers.” But I left out really important people, especially from the early years like Jim Londos and even later stars like Bret Hart. Same thing with the matches, but in that section, it wasn’t about work rate (again, my fascination, not that of a 12-year-old) but historical significance so the Steamboat versus Flair series isn’t described, but Andre versus Hogan at WMIII is.

Q: Did you have much input into the layout and photo selection?

A: None, which was fine with me. I helped with the captions, and I’m just amazed at how many great photos they were able to find and then use.

Q: What has the response been like so far?

A: Unlike my other novels, this was a work for hire, so I’m not earning royalties, thus seeing sales. I know it has made some best lists including one from the Chicago Public Library. The fact that the publisher keeps asking me to write more says something. No hate letters from Von Raschke fans, yet.

Q: Having worked in a library, where do you see these type of books going in the age of ebooks and tablets?

A: That’s the question everybody in libraries, schools and publishing is asking, and I think it’s still being sorted out. I have a dumb phone and a laptop, and have only read two ebooks in my life, so I can’t really compare the experience. The book format integrates text and illustrations I think better than reading it on a phone or maybe tablet. Picture books for children I also don’t see as going away, but novels for all ages and text books are probably in the most trouble. Maybe it would increase readership of books about wrestling. You know, like 50 Shades of Grey gained popularity in part because people could read it on their Kindle and nobody would know. Tablets take the shame out of reading about wrestling.

Q: What are you working on next? Any plans for more wrestling?

A: If I do another set of Dojo books, one of them would have a teen studying MMA as a way to prepare for WWE, but we’ll have to wait until we see how well that series does. So far, early reviews are positive and one book (Head Kick) was picked up by the Junior Literary Guild which is quite an honor. I turned in this summer a book for a series about bareknuckle boxing set in the 1870s, so I wrote / imagined the first MMA bout when a bareknuckle Irish boxer battled a Chinese immigrant teen who knew kung fu. I’d love to write more about wrestling for kids or adults because after some years of being disillusioned, the continued push of CM Punk and the big push of Daniel Bryan have me watching WWE again and even buying SummerSlam PPV, which I haven’t done in years.

Q: Is it a prerequisite to have more exclamation points in a book aimed at young readers!?  😉