A couple of new books have come out in the last little while aimed at a younger market, two for early grades, and one for middle grades. To help with my review of these books, I solicited the aid of my six-year-old son, Quinn, who knows what his Dad writes about, but has played an old Smackdown vs. Raw Wii game more than he’s ever watched wrestling on TV. 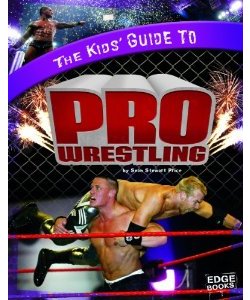 So obviously there’s a lot he can learn from these books.

Up first is The Kids’ Guide to Pro Wrestling, from Edge Books: Kids’ Guides, and written by Sean Stewart Price.

Quinn’s thoughts: I liked the smallest champion, Hornswoggle, the best. I learned about steel cage and ladder matches. The glossary was new to me, and I learned some new words. It makes me want to watch Raw. This was the appropriate reading level for me, and I am just finishing Grade One. Some of the guys in here I’ve heard of through my Dad, like John Cena, Hulk Hogan and Andre the Giant. There was nothing on Big John Quinn — I have a T-shirt of him!

Greg’s thoughts: Right off the bat, I was pleased to see “Consultant: Mike Johnson, PWInsider.com,” so I knew The Kids’ Guide to Pro Wrestling would at least be accurate, and it is. It explains what wrestling is, talks about heels and babyfaces, well-known moves, top stars and memorable moments. It is surprisingly all over the map, and not WWE-centric. Gorgeous George and The French Angel get mentions, along with the expected John Cena and The Rock. It’s a decent enough read, but not exactly something your primary grade reader will go back to again and again, I don’t think, making it a good library pickup.

Another book, from publisher Millbrook Press as a part of their Spectacular Sports series, is The Main Event: The Moves and Muscle of Pro Wrestling, from established author, Patrick Jones, who has written 2009’s The Tear Collector, among other books.

Quinn’s thoughts: It was cool to read because it tells you the history of pro wrestling, from the first few matches to WWE. It was fun to learn more about ladies in the ring. The ripped off ear of Yukon Eric was kind of disgusting. They called him Gorgeous George, but after he shaved off his hair, he wasn’t really Gorgeous any more. I want to see Hulk Hogan wrestle now, and more of John Cena.

Greg’s thoughts: This book was perfect for Quinn, who devours similar books on famous hockey and baseball players, though it is aimed at kids a little older than he is. The facts are excellent, the subjects widespread, and the photo choices are great. 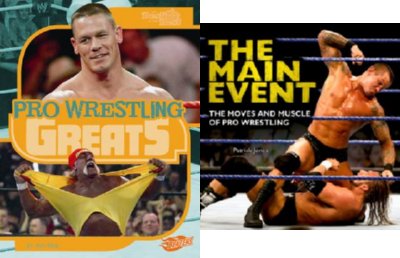 The weakest, by far, is Pro Wrestling Greats, by Ann Weil, and put out by Capstone Press. It is a quick read, with a single line on a number of current stars, and a couple of factoids on the 30 pages.

Quinn’s thoughts: Is Hulk Hogan black, Dad? (No, son, that’s just a really deep tan in the photo on the cover.) I like the picture of Triple H jumping through the air. But it is too short, and does not tell me history, like The Main Event.

Greg’s thoughts: Quinn polished it off in a couple of minutes. To me, there’s no value in returning to it, as there is with The Main Event. The glossary explaining some of the wrestling terms is a nice touch though. (We wrote about this back in 2011, but it was new to Quinn.)

Overall, I am pleased that there are more books aimed at younger readers about pro wrestling and that the likes of Mick Foley have helped to break down the stigma that librarians (and book publishers) may have had at one time towards professional wrestling. The fact is that reading is reading, and we should be encouraging our kids to read about whatever interests them.