When it was announced that Rob Van Dam would make his WWE comeback at the Money in the Bank PPV, wrestling fans were thrilled. Actually, it was almost a stroke of genius, as this PPV was being held in RVD’s second hometown, Philadelphia, where he is well known for his time with ECW. The reaction was amazing. “I had very few nights like this one in my career!” said RVD. 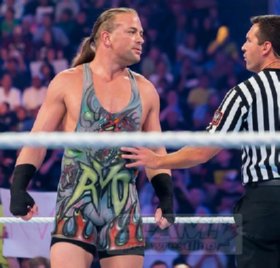 After nearly six years, Rob Van Dam made his long-awaited WWE comeback in a Money in the Bank match against Randy Orton, Christian, CM Punk, Daniel Bryan and Sheamus. But as good as the match was, it’s the reaction of the crowd for RVD that made it even more special.

“The reaction in Philly did not surprise me, but I appreciated it a lot. Any town I go now, I’m expecting fans to react that way since I was gone for so long,” RVD told SLAM! Wrestling. “And I will try to deliver every night for these fans because of this. But I was associated with South Philly for so long because of the ECW connection, it was expected. It was a great reaction just as I thought it would be.”

The match was the best thing on the show and Van Dam more than contributed to that. The following night, he made his Raw return against Chris Jericho and then, after eight years, his Smackdown return against Darren Young.

Having wrestled on the indy circuit and for TNA for the past six years, what was it like to be back to a full schedule?

“I left WWE because I needed more balance in my life, I needed to have my energies balanced and now was the time to come back. The schedule is not lighter. I’d say that it’s even more traveling than when I was here, but it’s not as challenging for me,” said Van Dam.

“The locker room is a different vibe, it’s a more positive vibe, guys are not afraid for their position like they used to be. At the end (of his first run with WWE) it was really miserable. Plus, I have more leverage now. I have more seniority with guys like Rock, Hogan, Flair, DX gone. It’s different how I’m being treated. I’m in a different point in my life. The travelling is not as hard as it was. I’m enjoying it now. We just had an 18-day tour and I was kind of apprehending that tour, but it wasn’t like that at all, it was a pleasure and I enjoyed it a lot.”

Since he was gone, many new Superstars have made their way to the top. Fans are probably already thinking of dream matches they’d like to see, but two of them especially are on top of RVD’s list.

“When I knew I was coming back, I watched WWE to familiarize myself with the new talent and I thought Alberto Del Rio was one of the guys who really stood out. And now it seems like I’ll be wrestling him in a near future. I was also very impressed with Antonio Cesaro and I think he’s one of the best guys on the roster.” (Indeed, RVD will be challenging Del Rio for the World Heavyweight Championship at the Night of Champions pay-per-view on September 15th.)

On a lighter note, returning to the WWE in mid-July meant he had to miss the San Diego Comic-Con, the Wrestlemania of all Comic-Cons. For a comic book fan like him, one would think he wished WWE would’ve brought him there with the other Superstars on hand.

“It was the first time in nine years I missed the San Diego Comic-Con,” revealed Van Dam. “Even if they (WWE) didn’t have me to sign autographs, I’d have gone just as a fan of comics, incognito. But it wasn’t that much of a big deal since I’ll be going to the London Comic-Con in February.”

This coming Friday, Rob Van Dam will make another return, this time in Montreal, after nearly nine years. In the early 2000s, he main-evented a few shows in Montreal against the likes of Kurt Angle, Triple H, Ric Flair and Randy Orton.

But his most unforgettable memory from Montreal didn’t happen in the squared circle.

“I’ll always remember being confused. I was in a club and because your money is coins instead of paper money, I didn’t know what to tip the girls!”

Much like New York and Philadelphia, Montreal is known for the loudness and intensity of its crowd. If RVD knows what to expect from them, what the fans, especially the new ones who came along in the last nine years, can expect in return?

“The fans know what to expect,” answered Van Dam. “I’m still gonna stand out, I’m still gonna be the coolest and that’s why I’m ‘The Whole Damn Show.’ Nine years is a long time and I look forward to being there and to react with a new group of fans.”

Rob Van Dam will be wrestling in a 6-man tag match this coming Friday, September 6th, at the Bell Center in Montreal. He will team with Mark Henry and The Big Show to face The Shield. Also on the card, Curtis Axel will defend his Intercontinental title against CM Punk in a No DQ match. Also announced for the show, WWE champion Randy Orton, Daniel Bryan, Wade Barrett, Antonio Cesaro, Jack Swagger and Brie Bella.

Tickets for this live event can be bought from Evenko.