Rockin’ ‘and rollin’ at wrestling fanfest

CHARLOTTE, N.C — The Midnight Express and the Rock ‘n’ Roll Express shared the stage yet again. But this time they weren’t beating the tar out of each other.

Two of the top tag teams in the history of wrestling stood side by side August 2, as they accepted induction into the Hall of Heroes at the Mid-Atlantic Legends Fanfest.

“Batman needed the Joker. Superman needed Lex Luthor. Every superhero needs a super villain,” said Jim Cornette, manager of the Midnight Express. “We wouldn’t all be here if it wasn’t for the fact that all of us were together.”

The ceremony was the centerpiece of promoter Greg Price’s four-day event, which attracted hundreds of wrestlers and enthusiasts to the Hilton Charlotte University Place for forums, autographs, photo ops, and general camaraderie. 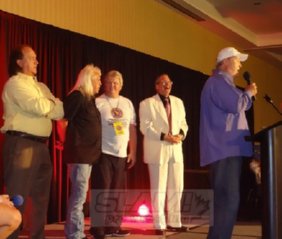 “It’s become like a class reunion of all the great performers in this area,” said Les Thatcher, one of the inductees into the Hall of Heroes, which recognizes major contributors to Jim Crockett Promotions and the Carolina-based territory.

Though they started in the Deep South, the Express teams are probably best known for their Mid-Atlantic work, thanks to national cable television penetration on SuperStation WTBS.

Dennis Condrey and Bobby Eaton as The Midnights entered the Carolinas in 1985, with the Rock ‘n’ Roll Express of Ricky Morton and Robert Gibson right on their heels. The timing was right for the pairings to nationalize a feud they started in Louisiana, said Tennessee promoter Jerry Jarrett, who was instrumental in advancing their careers and presented them for induction.

“These kids; I feel like they’re my children,” he said. “They absolutely saved Bill Watts’ [Louisiana] territory and went on and were dynamite when the Crocketts got on TBS and the SuperStation.”

Sportscasting duties keep “Sweet” Stan Lane, who replaced Condrey in 1987, from attending fanfest. But the powerboat racing commentator sent in a video message from Sarasota, Fla., for the fans.

“What a blessing and an honor it is to be inducted into the Hall of Heroes,” Lane said.

Morton and Gibson are still working; they beat D’Lo Brown and Luke Gallows in the main event of the August 3 fanfest wrestling card. “If I had to change a thing in my life, I wouldn’t change nothing,” Gibson said.

Former U.S. champion Magnum T.A. was presented for the Hall of Heroes by old foe and friend Tully Blanchard, just hours after they co-hosted a fanfest forum on the buildup to their 1985 “I Quit” match.

“I got beat up so bad that summer I know I wasn’t getting paid enough,” Blanchard quipped.

Magnum told the audience that he hoped to carry the world heavyweight belt at some point, but instead found his reward in fighting back from a career-ending 1986 car accident.

“What I thought was the goal, what I thought was the epitome of what I was supposed to do, all changed in that blink of an eye in 1986,” Magnum said. “I realized the message that I now had a chance to send around the world … that there’s nothing worth saying ‘I Quit’ for in life.”

A blast from the past was Lars Anderson, one-half of the original Minnesota Wrecking Crew, which dominated the heel side of the territory’s tag teams for more than 15 years. Anderson formed the first version of the Anderson Brothers squad with Gene, when they entered the Carolinas in 1966.

Brad Anderson, Gene’s son, introduced Lars and joked that it represented the first time he had seen his wrestling “uncle.” Lars, whose given name is Larry Heiniemi, left the territory in 1968 to pursue a singles career, a year before Brad was born.

Lars also is responsible for recruiting Ole Anderson from Minnesota into the wrestling family. “We attempted to set a standard — Gene and I — that legitimized at the time professional wrestling. I think a lot of the fans saw that,” said Anderson, now a California businessman.

Thatcher was inducted into the hall nearly 50 years after the Infernos burned his face in a 1967 tag team angle in Charlotte that fans still talk about. The 1966 National Wrestling Alliance Rookie of the Year recovered from his injuries to forge as a career as a wrestler, announcer, TV writer, magazine producer, and trainer.

“He took me under his wing and taught me how to act as a professional,” said J.J. Dillon, who presented Thatcher more than 40 years after he first teamed with him.

Thatcher estimated he spent one-third of his 53-year career in the Mid-Atlantic in some capacity. “This my life, this is my passion, this is what I do.”

“Dandy” Dan Miller was honored for his long involvement as a wrestler and business-side worker. A former Eastern States champion, Miller headlined in the Carolinas in the early 1970s and was known for his ability to work with any opponent and any style.

He also formed tag teams with Nelson Royal and Thatcher, among others, before running numerous towns in the region for the promotion.

Gerald Brisco presented Miller, saying he made a name for himself “as one of the honest guys and one of the good guys in this business,” and crediting Miller with elevating the image of wrestling by advancing charitable causes through the Mid-Atlantic territory.

Miller, a Florida resident, thanked his wife for bugging him into attending his first fanfest. “I’m sure that the wrestling fans who come here today at this great event over the weekend feel the same way I do: It’s worth being here.”