TORONTO — First, some context. I’m not the biggest fan of Ring of Honor for two reasons.

While I appreciate the tremendous athleticism of the wrestlers, I am not a fan of the “philosophy” of ROH matches. To me, the Code of Honor runs contradictory to the point of pro wrestling — which is to tell the story of a contest between a good guy and a bad guy. To me, the clear delineation between the hero and the villain is essential to the selling the story.

While ROH seems to be more about the moves than the people doing them. I think that the perfect wrestling match is a blend of the two.

I find that the focus on the moves often results in the wrestlers doing way too many of them. In many Ring of Honor matches, there are tons of high-impact moves employed. Matches can sometimes feel like a marathon of move after move after move, with two-counts aplenty. To me, that can get tiresome and gets almost exhausting to watch. Don’t get me wrong — the plenty of oohs and aah moments make them fun matches to watch at the time. But with so many moves being done in such rapid succession, with no breathing room in between to sell the effects, it can get a bit much. Sometimes, less is more.

That said, here we go with the recap of the All Star Extravaganza V from Saturday night at Toronto’s Mattamy Athletic Centre, once better known as Maple Leaf Gardens. It’s a unique facility now, with a grocery story and a liquor store on the two floors below, as well as a gym, and the arena sitting on the third floor with the general admission having to go to the fourth floor. Only half the arena was actually open, which meant for long lines at the concession, but the beer booth on the ringside level hummed along. I’d guess there were 700 or so in attendance, not all that different than the other Toronto-area locations ROH runs: Ted Reeve Arena in the east end and the International Centre in Mississauga.

The company is owned by a TV company, so it has always frustrated me that they can’t figure out how to make the ring announcements sound clear. Or maybe I’m just old and can’t hear so well any more. Regardless, I certainly didn’t hear any acknowledgement of the history of this building. There has been wrestling here since 1931, and it’s the first wrestling card since WWF ran a show there in 1995.

Good match, simple enough story, good back and forth, and the right length for an opener. Kushido had some nice moves, ending things with a beautiful moonsault.

Match immediately goes to the floor and they battle ringside. It’s a very receptive crowd, applauding for a Tomassa using a standing falling senton — in other words, he just fell onto Young. Young’s moustache got more heat than he did. First crazy move of the night was a snap suplex from the apron right to the floor. I guess in the main event, someone’s going to have to shoot the other guy. Really, it was awesome, but, the second match? Tomasso wins after a powerbomb into a back-cracker.

Maria came out, and she stood at ringside. Then she walked around the ring, pausing every so often to lean against the apron, or jump up and down. Man, I could watch that for hours. But then she got sent to the back by the referee, and I noticed there was an actual match going on. Mike Bennett piledrove BJ Whitmer on the apron, and after some time, BJ still didn’t get up, the match was called off, and the medics came out. This didn’t appear to be part of the show. The show was halted for about 15 minutes while emergency personnel checked on BJ, and stretchered him out. [See: ROH’s BJ Whitmer hospitalized.]

ROH TV Champion Matt Taven came out with Truth Martini, Scarlett Bordeaux and Selezya Sparks. Nigel McGuinness made Scarlett sit next to him on commentary, which seems to be a waste of her hotness. Sparks was still there, though, so that was good. A slow pace to this one to start, but things picked up. Roderick is great, with some really creative variations of back-breakers. Roderick had the crowd on fire for a superplex followed by a crab-style submission. He won with an overhead bomb into a back-breaker. Good match.

London is my favourite wrestler on the ROH roster, but the majority of the crowd here was behind Elgin, who was making his return to the Toronto area after his move to the U.S. (and subsequent marriage) earlier this year. The challenge here is that stylistically, Elgin’s size and power makes him a natural heel against London, whose aerobatic style and charisma makes him a born babyface, but the crowd dynamic here is more about the moves than the story. Too many moves to mention, but highlights were a 30-second delayed vertical suplex by Elgin, a tilt-a-whirl headscissors by London off the apron to the floor, a Shooting Star Press by London and a top rope powerbomb by Elgin. Eventually, Elgin got the win with a series of buckle-bombs and a spinning powerbomb.

During the intermission, Jimmy Jacobs came to the ring and complained that he wasn’t in the World Title tournament. Then he ran around the building trying to sell his 8x10s.

This was a bit confusing in that it was a three-way match but only two guys were allowed in the ring at a time. So why would anyone tag in someone from the third team, and risk not being in the ring to win the match?

Logic aside, this was a fun match. The Bucks are amazing at playing d-bags while still hitting some dazzling moves. But all six men had their moments — ACH is a tremendous flier. Match was too quick to call. ACH got the win for his team after covering Cedric Alexander, who had been laid out by a Buck. The over-under for the number of head-kicks in a Young Bucks match is typically 12. I think we were over on this one.

A good match, with similar psychology issues as Elgin and London. Steen won with a backbreaker. I’ve been a fan of both guys for years, and am glad they didn’t disappoint.

Maybe it was the concession stand beer and pizza, but it was about this time that “ROH Fatigue” hit me. It was three hours into the show when this match started, and after everything I’d seen so far, there was little that these guys would be able to do to be new or particularly compelling to me. After a slow build of headlock exchanges, the match went like this: X hits a headkick, Y kicks out at two. X goes for another move, Y thwarts the attempt by kicking X in the head. Y gets a 2-count. Y goes for another move, X hits a headkick. And repeat. This goes on until Cole finally hit the ever-elusive second move and got the pin.

It was announced by Bobby Cruise that BJ Whitmer was being seen by a doctor, but there was no further news at this time. 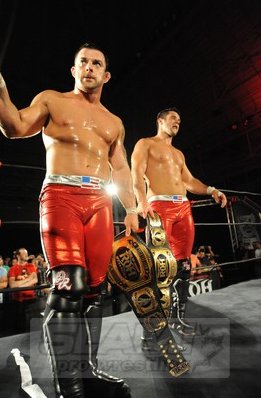 By this time I had mentally checked out of the show, so wasn’t really invested in this match. So like everybody else on the internet, I decided to just get negative and nitpicky. First, I didn’t like that both teams wore the same shade of red. That, and the physical similarities between them made it too hard to know who was in the ring (and, yes I know Romero is black or Latino or whatever — didn’t really help). Plus, at one point, one of the teams squared off and teased a breakup, so that further confused me in my half-interested state. Second, I didn’t like how the ref let anything go — guys didn’t tag in, just ran in and out at will, the action outside the ring went on forever at times. If it’s going to be No Rules or Relaxed Rules, announce that during the match intros, so people have the context. Third, I didn’t like how the match didn’t end at the best part. Or, more precisely, at any of the obvious finishing points. There was a neat sequence of moves that ended with one team doing simultaneous roll-ups on the other team, but they only got two counts. Later, after a series of finishing moves, the stage was set for a pinfall after a 450 splash — two count. There were several good stopping points that didn’t stop the match that it was like the third Lord of the Rings movie. Lastly, I didn’t like how, after 20 minutes of a hard-hitting battle, they tried to add some comedy spots, like the Wolves going for double head kicks, only for one of the other guys ducking so they kicked each other’s feet and sold that more than they sold being slammed off the top rope. And I hated, hated, hated that after fighting for 20 minutes and losing their tag titles, Kozlov and Romero just stood there, emotionless, while the Wolves asked the crowd to applaud for the losing team. Where was the anger or disappointment at losing? Where was the fiery challenge for a rematch? If they don’t care, why should we? Aaaargh!

Well, at the end of the day, I am still not a huge Ring of Honor fan. Much of the show was good, and I had fun for the most part. But only up to a point before I completely tapped out. Will I go to another show? Probably. I’m still a big fan of many of the guys on the roster. But maybe next time I’ll leave at intermission — and walk away with a smile.

“Bloodthirsty” Bob Kapur is rapidly becoming the grumpy curmudgeon of the SLAM! Wrestling staff, and, unlike the Bella twins, can actually say he is a “veteran” and it is true. Email him your thoughts on Ring of Honor at [email protected].